“And that this may be the more effectually observed, it is the duty of all believers, according to the Word of God, to separate themselves from all who do not belong to the Church, and to join themselves to this congregation wheresoever God has established it.” —Belgic Confession, Article 28

The last bond between the Christian and Christ’s Church that article 28 presents to us is separation. This may sound counterintuitive: How can we form a godly bond out of separation? An illustration from everyday life answers this question.

Perhaps you are friends with your unbelieving neighbors. Occasionally you are at each other’s homes for coffee and dinner; your children play with their children. You are at times uneasy about this relationship, but you endeavor to show love for them and even witness to them from time to time. For though they do not walk with the Lord, you believe that being a friend with a worldly person is not the same thing as having friendship with the world (James 4:4).

Imagine that one day you hear something unpleasant about this couple. It turns out that they are going through a divorce because one of them has committed adultery. Though this greatly saddens you, you reason to yourself that this does not mean that you have to stop being their friend. Perhaps you can guide them through this difficult time. Nothing you say or do, however, has any effect on the couple. Over time the offended party leaves the home, and the divorce is finalized. Shortly afterward you realize that someone has moved in with the adulterous party. A new love is in the picture.

You face a difficult decision: though you want to continue to witness to your neighbors, you are no longer comfortable being in their home. You believe that to do so would be to ignore, if not countenance, the sin of the broken marriage vow. You are also concerned about how their lifestyle will affect your children.

Is this not in essence the same issue with our bond to local congregations—that sometimes in order to hold to a godly bond that pleases the Lord a person must make a kind of separation from a church body? Article 28 explains that we must leave or disassociate with those who do not really belong to a holy congregation of Christ. Of course article 29 tells us what the attributes of a true church are and how to distinguish it from a false church, but de Bres makes it clear in this article that when a church does not maintain the minimum1 of what makes a church a church, we must leave.

This is something that we cannot take lightly or do haphazardly. We do well to consider the seriousness of this separation by contrasting it with some of the more superficial reasons some people have left their home church. Maybe some member of your congregation has offended you, or he or she simply rubs you the wrong way. It would be easier if that member left the church, but it does not appear that this will ever happen. Perhaps you should leave; that would solve everything. Yet it does not appear that you have any biblical grounds for doing so: it is not “according to the Word of God.” In this case, unless the person should be subject to church discipline for a grievous offense, you will have to live with him or her. Even better, you have to love this member and serve him or her as Jesus commanded, as we saw in the last article.

Others dislike the pastor. Others note that another church in town has better programs for their children, and still another complains about the music. There are a myriad of other unbiblical reasons professing Christians set their heart against the congregation that they are a part of, even if they have taken vows to be members in all due submission, as we saw in the fourth article. So what does de Bres mean when he says it is the duty of all believers to separate themselves from those who are not part of Christ’s church? Let us consider the historical context. There were some who internally sympathized with the cause of the Reformed churches but were not all members of that body. Essentially, de Bres was calling professing Protestants to leave the Roman Catholic Church and be joined with their true brothers and sisters: to “come out from among them and be separate,” for it had become a corrupted and idolatrous temple (2 Cor. 6:17).

Of course to do so was, in many cases, quite literally to take your life in your hands. As de Bres also wrote in article 28, Christ demands this separation, “even though the magistrates and edicts of princes were against it, yea, though they should suffer death or any other corporal punishment.” Thus de Bres sealed his own fate with the writing of this confession, daring to classify the Roman communion a false church and making it a duty for true Christians2 in the Lowlands to join the Reformed church.

How does this apply to us today? If we are not facing persecution from a false church for leaving her midst (though that could and still does happen in our time), what ought we to make of de Bres’ statement? Consider the principle: is it not a matter of concern for you and your family’s spiritual life? As we saw with the illustration, there is more at stake than keeping up a relationship that will, inevitably, bring you to harm if not put you in harm’s way.

So Isaiah counsels God’s people: “O house of Jacob, come and let us walk in the light of the Lord. For You have forsaken Your people, the house of Jacob, because they are filled with eastern ways” (Isa. 2:5­–6). Note here that separation begins with God: He had forsaken his people for their idolatry. What business, then, would a godly Israelite have with those who practiced such things? The prophet later says: “Sever yourselves from such a man, whose breath is in his nostrils; for of what account is he?” (v. 22). Obviously the circumstances were different at this time; until God said otherwise, the church was bound to the land of Israel, and, as such, a faithful believer had to stay in the land and bear with the corruption of the church to the extent that he would live among them. But essentially he was to consider himself separate.

Christ said something similar to His disciples, warning them that the leaders of the synagogues would judge them and throw them into jail. Many of these churches or local assemblies could become or be considered synagogues of Satan, not God (Rev. 2:9; 3:9). And even a congregation that is a lampstand could be spat out of the mouth of the Lord for her persistent unfaithfulness (Rev. 3:16). In addition, many of the early disciples’ family members hated them, as our Lord said He came to set them against one another. All of this happened within the church—within the midst of those who professed faith in the God of Israel but were divided about the one who claimed to be the promised Messiah.

Above all, then, separation is a matter of Christ’s lordship. It is to assert the scriptural truth of the headship of Christ over his body, the church. Thus, when a church has separated herself from Christ, she ought to be considered dead. “If we deny Him, He also will deny us” (2 Tim. 2:12). In this we see that the bond between the Christian and Christ is stronger than the bond between a Christian and those who only profess to believe Jesus but in reality deny Him. 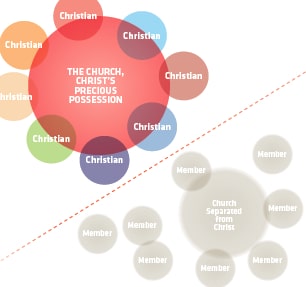 In all these situations, God was judging His people. And it is apparent that He will no longer bless a church body with His special presence when she has become false to Him. A friend once told me about a denomination he served in where there was concern about the blatantly unbiblical attitude in her midst. A colleague of his said he was worried that one day he would wake up and find that the Spirit was moving somewhere else, that his church, which once was a river that flowed, bringing life everywhere it went, was now just a dry bed in the midst of a desert. The question is this: Why are God’s people still there when God Himself is not present?

Of course many will be offended when we take this stand. But this separation is not because we are better or more righteous than others, nor may it be because we think that is the case. Nor is it because those who choose to remain behind are automatically false brothers, even as de Bres did not condemn his contemporaries who remained in the Roman Church but rather patiently called them to leave it. Rather, it is because God commands it of us, and thus it is a righteous thing to do.

In this series we have stressed the relationship between the individual Christian and the local church. Here we end on what appears to be a contradictory note. But it isn’t. Our confession states that when a person separates from those who do not belong to Christ’s “holy congregation,” he must, in turn, “join [himself] to this congregation” (emphasis added). Thus the importance of Christ’s church for the Christian continues, even in the midst of turmoil and trouble. It is to believe what Christ promises: “the gates of Hades shall not prevail against it.” Despite all her difficulties, errors, and sins, she is still His precious possession. Let us believe that is so and act accordingly by being faithful members of that church “wheresoever God has established it.”

1. All churches could or should be more pure than they are. What is at stake is not so much the level of a church’s purity but whether it possesses purity at all as defined by the three marks (article 29).