“Stand therefore, having your loins girded with truth, and having put on the breastplate of righteousness” Ephesians 6:14 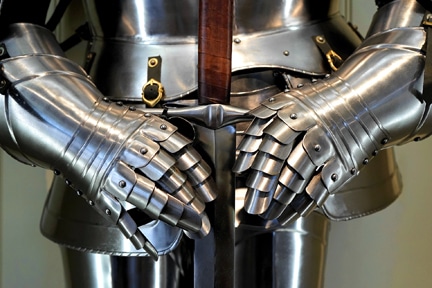 Paul patterns the armor of the Christian after the equipment of the Roman soldier. This equipment was designed both for defense and for offense. One of the parts was the girdle or belt to which other pieces of the armor were attached. The belt held things together, gave necessary reinforcement and support, and afforded a feeling of firmness and compactness.

The Christian soldier, says the apostle, must be braced with the belt of truth. We can easily understand how the Christians in Ephesus interpreted that. Ephesus was a very wicked and worldly city. Enemies of the Gospel thronged the streets. The temple of Diana dominated the city and represented a popular religion that permitted all kinds of immorality. In such a discouraging and unfriendly environment the Christian believer was expected to hold himself together with firmness and conviction. That is sometimes a difficult thing to do even when one lives in a relatively Christian community, exposed to just the ordinary influences of the world. How much more difficult it must have been for the believers in Ephesus. “Gird your loins with truth,” is the advice of the apostle.

That is how we can maintain our stability amid the moral laxity and spiritual hostilities of our day. In our civilization the enemies of God’s truth come to our very doors, peddling their pamphlets and books that contain a counted it revelation. They are clever, subtle, and insistent on a hearing. Recently a housewife in my congregation had such a delegation at her door. But she was not to be deceived. Courageously she quoted Scripture to them, and finally they left without having prevailed over her. She had met their perversions with the truth!

“Gird your loins with the truth.” That does not mean simply that we must pay our respects to some general moral principles of decency and convention. The apostle’s appeal goes deeper than that. We must be braced with the whole counsel of God. The truth must possess us, encompass us!

It is an appeal that carries special urgency to our young men in military service. Only those who have been in the service know what a trial of faith that can be. To them we say, Wear the truth! Face every task, every temptation, in the vigor of truth’s bracing grip. God’s Word, prayerfully read and studied, will supply you with storm-proof consistency and conviction.

How much we all need to pray, “Holy God, amid the confusions and conflicts of our day we can be strong and persevering only as we are sustained by thee. Give us fire-proof faith; feed us with truth; bless us with large measures of spiritual power so that defeat and capitulation may never disgrace our Christian profession.”

“And having put on the breastplate of righteousness.” The breastplate of a Roman soldier was important because it protected that part of his body which contained vital organs. It was a sort of vest, often made of metal plate, protecting the back and the hips as well as the breast. Paul relates this to our spiritual warfare by saying that righteousness is a protecting garment.

What is this righteousness? Is it the inwrought righteousness that exhibits itself in a life of sanctification? Without doubt, the element of personal godliness has its place in the counsel Paul here gives us. But there is something prior to that which must be seen first, and without which the appeal for personal integrity and rectitude would be altogether irrelevant. We must be protected by the righteousness of Christ imputed to us and received by faith alone (cf. Romans 4). That is more than moral rectitude. It is more than integrity and uprightness. It is all that, to be sure, but only because it is first of all something else,—the righteousness of Christ. Apart from the merits of Christ our righteousness is carnal security.

Jesus, thy blood and righteousness

My beauty are, my glorious dress,

Midst flaming worlds in these arrayed,

With joy shall I lift up my head. To this imputed blessing there must be added outward conformity. God intends that it shall be the most practical thing in our conduct.

There is a covering of respectability which many people fabricate for themselves, which is not part of the armor of God. It is that outward respectability of which the Pharisees were proud. Look at the Pharisee in Luke 18:11. In his self-esteem he appears to be in need of nothing. He believes in the doctrine of human depravity so far as ti,e publican is concerned, but as for himself he is grateful that he is not “as the rest of men.” No wonder the Pharisees hated Christ when he told them so plainly what they really were in the eyes of God.

O Lord, it is only by thy grace that we have so sure a defense in our spiritual warfare. Help us ever to rest wholly on thy righteousness. Amen.