You shall put into the ark the testimony which I shall give you. Exodus 25:16

This month we return to the furniture in the tabernacle. We step with special reverence and holy awe beyond the Veil. We move beyond the curtain that separates the Holy Place from the Holy of Holies. We come to that spot that in the Old Testament days was the holiest place in all the earth. Under the old covenant, only the High Priest was permitted to enter into this part of the tabernacle—and he only once a year, on the great Day of Atonement. He could enter only with blood from the bronze altar.

How the hearts of the children of Israel must have been filled with joy and gratitude when God made the gracious promise that He would meet with them. How gladly they must have brought their offerings to make the sanctuary where God Himself would dwell. Five chapters in Exodus describe for us the tabernacle and its contents. God begins by showing us the ark of the covenant and the mercy seat. Then He leads us out of the Holy of Holies to the Holy Place by the golden lamp-stand that sheds its light upon the table of showbread and the golden altar of incense. We pass from the Holy Place into the outer court and find there the bronze laver and the bronze altar.

It is God—it is always God stooping down to meet man, not man ever reaching up to meet God. Our Lord and Savior Jesus Christ traveled all the way from the mercy seat in the Most Holy Place, from heaven itself, through the Holy Place to the bronze altar of sacrifice. Paul wrote, “He emptied Himself, taking the form of a bond-servant, and being made in the likeness of men. And being found in appearance as a man, He humbled Himself by becoming obedient to the point of death, even death on a cross” (Philippians 2:7,8).

Have you ever wondered about the exact meaning of the word “ark”? This is not the first time that that word appears in the Bible. The first time was when Noah gathered his family and the animals into the ark. The second was when Jochebed hid her son in the Nile—she placed him in an ark. The word “ark” carries with it the idea of a chest for the safekeeping of cherished articles. In the ark of Noah there were the eight people whom God cherished. He had chosen to save them from the flood along with all the animals that God directed to go into the ark. The ark that hid among the bulrushes on the Nile contained a cherished little baby by the name of Moses.

What was in the ark of the covenant that was so cherished? The ark really was not all that big—three and a half feet long, two and a half feet wide, and two and a half feet deep. In the ark were placed a pot of manna and Aaron’s rod that budded in the wilderness. These articles were cherished by the Israelites because they signified God’s almighty miraculous deeds done on their behalf. 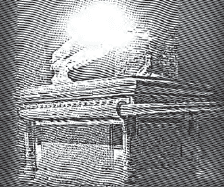 One Item in the Ark

The tablets of stone that were placed in the ark were inscribed by the very finger of God. They were an expression of God’s righteous demands upon the people whom He had delivered out of bondage. The Law promised life to those who could keep all the terms of the covenant that were written upon those two tablets.

You may recall how God gave the people of Israel the Law. They were slaves in a foreign land. They cried out to God for deliverance and He sent them Moses. Ten plagues later, with a mighty and outstretched arm, God delivered them out of bondage and out of their slavery in Egypt. He had led them into the wilderness; daily He supplied the people with manna, and when the people asked, He sent quails. He opened the rocks and water gushed out.

After the people agreed to the terms of the covenant, Moses sprinkled both the book of the covenant and the people with blood, signifying the sealing of a covenant between them and God. It was a covenant that bound them to obedience. It was a covenant that bound God to punish disobedience. It rested on the faithfulness and strength of the people of Israel. All God had to do, so to speak, was be with them and watch over them, and, if they should become disobedient, to deal with them accordingly.

It must have sounded good to them when they said they would obey the Ten Commandments. They were doubtless thankful to God for their release from captivity. They gratified their hearts by what seemed like a humble promise to obey God. But mankind can not obey God.

In the midst of all man’s failure and sin, God comes in His mercy and grace. At Sinai Israel was binding herself to a Law that she could not keep, exposing herself to all the righteous vengeance of God, but God looked onward to the One who would be able to fulfill the demands of the covenant on behalf of Israel. Certainly God could not lower His standard. Just as certainly, man had no power to attain righteousness for himself.

In addition, the covenant had been confirmed with blood so that neither party could set it aside. It could not just be forgotten. It could not be annulled. It could not be torn in two. It was holy, just, and good. It was given by God Himself. The people had agreed to the terms. There it was—the Law—a solemn witness of the unapproachable righteousness of God and the ruin and helplessness of mankind.

And yet more than that was needed. For Israel was not only powerless to keep the Law and maintain righteousness, they had done far worse. They had broken the Law and, in breaking the Law, they had incurred its awful curse. Before the very tablets of the Law were brought down from the mountain, Israel was found reveling in sin around the golden calf. The Law had been broken at its very introduction. Moses, coming down from the mountain carrying the Ten Commandments, must have sensed the uselessness, as well as the danger, of bringing the terms of the covenant to the people. He threw the stone tablets to the ground. The Ten Commandments were broken, not only in the stone tablets that fell to the ground, but also in the stone hearts of the very people who were to receive it. While Moses was in the mountain receiving the Law, the people were bowing before an image that they declared was the god who had delivered them out of bondage. Such was the reception man gave to the introduction of God’s holy Law, and such is our treatment of the Law to this day. The Tablets were broken, and like the fallen race, they can never be restored. How foolish we are to think that by observing a fragment of a broken Law that we can satisfy God or justify ourselves. And yet, that is how so many seek to enter into the kingdom of God. They zealously cling to outward forms or a small piece of the Law that they are able to keep, all the while ignoring the other fragments around them.

Salvation is not some complex thing made up of law and grace. It is grace, grace, and grace alone. If you add law to it, it is no longer grace.  You must realize that you are helpless as well as hopeless. You have broken the Law of God and thereby not only forfeited the claim of righteousness but you are under the curse that comes with it—death. The curse of the broken Law has to be borne. There was no provision in the covenant for mercy, so judgment has to take place.

All those through the ages, from the people who bowed before the golden calf to those who have said, “All that the Lord has said we will do,” must cry out with the apostle Paul: “Wretched man that I am! Who will set me free from this body of death?” (Romans 7:24). Someone had to be found: someone who is able to fulfill all righteousness; someone who will bear on our behalf the deadly penalty for breaking the covenant.

And such is Jesus Christ. He was foreseen in the counsels of God, foreordained before the foundation of the world. In the fullness of time He was sent by God “made of a woman under the Law to redeem them that were under the Law” (Galatians 4:4, 5).

Why It Was in the Ark

Now notice that the Law was preserved out of sight. It was placed in the Holy of Holies. It was removed out of Israel’s way forever to conceal the ministration of death and to prevent it from breaking forth in all its vengeance.

Here in the ark, we find the Law. It is under the mercy seat of God. Here we have a beautiful representation of Jesus Christ. Jesus came down from heaven to do the will of Him who sent Him. He delighted in that will and was obedient even unto death. Through His death He has accomplished the removal of the curse.

This same Jesus stands before God as the One who has fulfilled all righteousness. He has forevermore removed the stern barrier that prevented sinful man’s approach to God. He has fulfilled the demands of the Law. What the Israelites were unable to do—what we were unable to do—Jesus Christ has done for us. That is why Paul can write, “There is therefore now no condemnation for those who are in Christ Jesus.”

That which was the very hindrance has through Jesus Christ become the very ground for our fellowship with God. The Law has been kept—not by us, but by Christ. When we come to God through Christ, the conditions of the covenant are met. We can have fellowship with God. We can enter that most sacred place, the Holy of Holies.

Our way to God is through Christ. He has taken Law out of the way—by fulfilling it. “For what the Law could not do, God did, sending His own Son as an offering for sin” (Romans 8:3). God meets us, not in the Law, but in grace, through Christ. And so this Law was placed in the ark of the covenant, but it was covered up, sealed by the blood of Jesus Christ.