“He holds victory in store for the upright, He is a shield to those whose walk is blameless, for He guards the course of the just and protects the way of His faithful ones.” Proverbs 2:7–8

Ephesians 6:16 states, “In addition to all this, take up the shield of faith, with which you can extinguish all the flaming arrows of the evil one.” We need a shield away from our bodies to protect us. If we do not have a shield an arrow may hit us. It may even be able to pierce our armor. Even worse the arrow may strike our necks or faces which are not covered by armor.

This shield needs to be large like the Roman shield of Paul’s day – a shield that would cover most of the body. The Roman shields were not only large but they were also covered in animal skin which could be dipped in water before battle. That way, if the enemy shot flaming arrows, the water would douse out the flame as the arrow struck the wet shield.

The enemy will do anything to destroy the people of God. There are no holds barred from his arsenal. As the devil attacks with these flaming arrows you can take hits in your shield. Whatever momentum the arrows have can be absorbed by the shield. 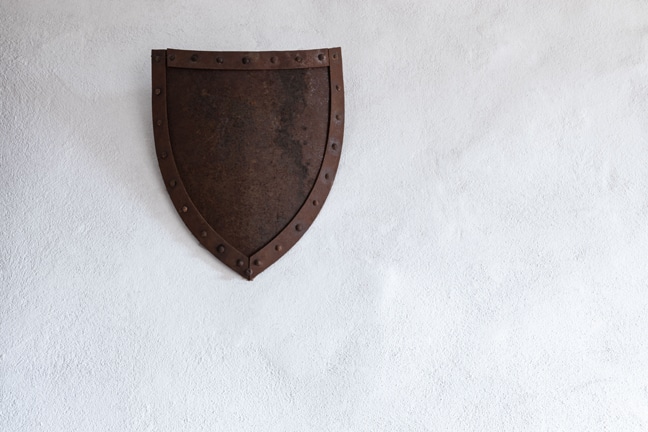 What is this shield that we have for protection? It is faith! Faith comes from the Lord to cover and protect that which the other parts of armor can not protect. All parts of armor are necessary. That is why this is in addition to the other parts of the armor. The armor is not complete without the shield, nor the shield complete without the rest of the armor. You are only ready for battle when you have all the pieces. You can not pick and chose which you want. You do not want to go into battle without a shield or a breast plate! An arrow would take you out early in the battle.

The arrows of the devil are real. Some examples of them would be: greed, lust, pride, jealousy, drunkenness, sexual impurity, and even physical persecution. If we read the paper or watch television we can see that we are surrounded by these very things.

We need to build up that faith which God has given us. How do we do this? By being in His Word, soaking it in. Believe every syllable in it and practice the teachings in our daily lives. By worshiping God and hearing His Word proclaimed to us for a better understanding of that Word and God’s will for our lives.

When we are in worship and par-take of the sacraments, this too, builds our faith. The Lord’s Supper and Baptism remind us that we are in Christ and that we are His and that the Father keeps His covenant promises to us. We also strengthen our shield by being in constant prayer to God, having open com-munion with Him directly. What an awesome ability, to go directly to God in prayer because Christ is mediating for us before the Father. Christ is speaking to God on our behalf! Finally surround yourself with Christian family and friends. These are the people who are truly concerned for you and can help you and minister to you when you are under constant attack. This is the way to build up the faith.

When we build up our faith we can even use our shield as an offensive weapon. The shield is primarily a defensive weapon but it can be used to smash an enemy. If you take a hard object and ram it into someone, it can do a lot of damage. I think Paul may have had this in mind when he wrote in 2 Corinthians 10:3-6, “For though we live in the world, we do not wage war as the world does. The weapons we fight with are not the weapons of the world. On the contrary, they have divine power to demolish strongholds. We demolish arguments and every pretension that sets itself up against the knowledge of God, and we take captive every thought to make it obedient to Christ.” You see, faith with the knowledge and proper use of God’s Word can demolish sinful desires. Faith, given to us by God, gives us the courage to stand up and actually attack with it. A mind that is set in God’s ways is a powerful weapon.

This may seem like a graphic picture of battle. The soldier needs to prepare in such a way as to protect himself against anything that the enemy might try to do to him. That is true. But we have a great hope and we are not to be afraid in this battle for God provides our armor! He is the one who gives us our shield. He gives us the means to soak it in the water of His word. Everything in God’s Word is for the Christians benefit. He sent His Son to save us from the wrath we deserve and from the fiery flames of the evil one. Remember it is God who shields you. So, go soak your shield!

• Count how many times the word faith is used in this passage. Does this say anything about the importance of faith and its      relationship to the people mentioned concerning faith?

• How is faith defined?

• Where does faith have its source from?

• When you have faith what does it act on?

• Who was the Old Testament patriarchs faith based on? Had He come yet? What was Moses looking forward to?

• What can faith overcome?

• Who is the one who gives and completes our faith? Do we do anything ourselves?

• What does it mean to be sealed? Who seals us in our faith?