Spiritual and moral values are learned and caught by the younger generation from parents, teachers, and adults in general in many different ways, some through intentional teaching and some unconsciously. Therefore, we are never able to totally evaluate the impact or effect of the impression left on the young, absorbing mind.

In my childhood home two methods, among others, used for teaching values were proverbs and plaques. I believe the two methods have some definite advantages. Each leaves a message in a brief amount of time and space and often with lasting effect. One unconsciously memorizes the spoken or written proverb, saying, or Scripture text to have the lesson retaught many times later in life as well. Plaques on the wall teach a lesson or preach a sermon daily without a lecture or forced listening, and the memory absorbs unconsciously, creating a sentiment or belief no one worked specifically to instill. Unfortunately, plaques are not found as much in homes today, partially because interior decorating sets the decor more at this time. Plaques always make a statement from and about the home occupants to anyone in the home. In the community in which I lived as a child, the walls of a Christian home usually left no person in doubt as to whether that home was seeking to promote biblical principles and values. 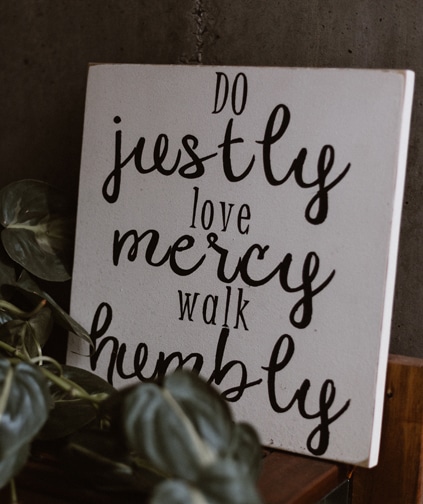 My father taught by means of a proverb or saying many times. One I specifically remember taught me then, and I have recalled it many times later for it to speak to me in other but similar situations. I asked my father for a want which I had made into a need for myself. Dad looked at me kindly and said, “I complained I had no shoes until I met a man who had no feet.” Those words of instruction have repeated themselves to me many times to turn discontent or complaining into gratitude and counting one’s blessings instead.

Another occasion of a proverb taught and retained is the time an adult was talking to my father about criticisms that were being leveled at a man who had married just a matter of months after his wife’s sudden death. I heard my father say in reply, “I don’t feel I can criticize him. I have not walked in his moccasins.”

A saying my father had about going to church was: “If you’re too busy to go to church, then you are too busy.”

My parents were hard workers and counted work a blessing, but they believed a balance was necessary. Laziness was frowned upon as well as being a workaholic. A proverb I’ve heard quoted to stress keeping work and pleasure in balance was: “All work and no play makes Jack a dull boy. All play and no work makes Jack a mere toy.”

These are only some examples of many. I believe proverbs are effective teaching tools. They do not lecture, but, rather, convey a concept or value with few words and an easy recall due to their profound simplicity. Each proverb has its own bit of wisdom, and its application in life can often be helpful. Proverbs or sayings teach by being memorized easily and teaching again and again which helps in adopting that value as one’s own. A book which contains many proverbs with much godly and practical wisdom for living is the book of Proverbs in the Old Testament. I recommend reading the book of Proverbs meditatively and frequently.

Plaques were used much in our home; in fact, when we children were going through my parents’ earthly possessions after both my parents had passed away, it struck me that the plaques and pictures which had hung on the walls of our home were things that had a cherished, sentimental value for each of us. No one had demanded that we pay attention to them, but their silent witness on the walls for those many years had spoken to each of us.

One plaque hung in my parents’ home, and today that same Bible verse is found in a number of the homes of the children and grandchildren of my parents. It is Joshua 24:15b: “As for me and my house, we will serve the Lord” (KJV). The plaque hanging on the wall behind and above my  father’s place at the table spoke the testimony of Joshua and the testimony of my parents to their children each day and at every meal over the years as well as to each guest in our home.

In my mother’s kitchen hung the plaque with the words from John 20:31: “But these are written, that ye might believe that Jesus is the Christ, the Son of God; and that believing ye might have life through his name” (KJV). Through that plaque my mother in her humble, gentle manner presented the way of salvation to each of her children every day as well as to every visitor entering her home. Her life and her presentation of the way of salvation through the plaque witnessed for the Lord daily in her love and hospitality to her family and guests.

Another plaque, which hung on a bedroom wall in my childhood home, had the saying: “Only one life; it will soon be past. Only what’s done for Christ will last.” Those words help me when priorities begin to get out of balance.

As previously mentioned, plaques are not as common or plentiful in home decorating today; however, they are still available and attractively made. Also, posters which are common today can be used in much the same way as a plaque in Christian school classrooms and in less formal rooms in the home.

Proverbs and plaques can be an aid in teaching values and in talking about and writing God’s commands and teachings as the Bible instructs in Deuteronomy 6:6–9 and again in Deuteronomy 11:18–20: “Fix these words of mine in your hearts and minds; tie them as symbols on your hands and bind them on your foreheads. Teach them to your children, talking about them when you sit at home and when you walk along the road, when you lie down and when you get up. Write them on the doorframes of your houses and on your gates” (NIV). Proverbs and plaques, I believe, help to unobtrusively enforce and develop an appreciation for the values parents are wanting to convey and instill in their impressionable children. I strongly recommend the use and worth of proverbs and plaques as a verbal and a visual method of teaching spiritual and moral values in the home.

Jan Groenendyk was a Christian school teacher for twenty-seven years. She is the wife of Rev. Marion Groenendyk and is a member of the First Zeeland CRC.