“The buggy is all hitched and the mare is prancing, Ma. Let’s go!” While Pa holds the horse steady, Ma and the six children climb into the buggy and snuggle down under the carriage robe. The four miles to town quickly slip by to the clippety clop of the horse’s feet, and the white steeple of the little church soon comes into view. While Pa is unhitching the mare and putting her in one of the horse stalls alongside the church, Ma and the children make their way to the “c’storie kamer,” the consistory room at the rear of the building which also serves as society room and, on Sundays, as a gathering place for the worshippers. 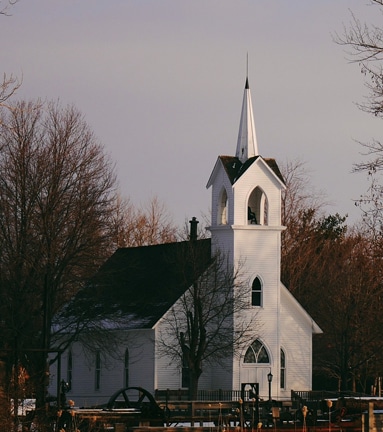 Several families have already arrived and, having put their soapstone foot-warmers on top of the wood stove in order to have them “Iekker warm” for the homeward ride, are busily engaged in exchanging the latest local news. Pa soon joins them. After a few minutes of warming his hands by the stove, and participating in the conversation, he beckons to Ma and the children that it is time to go into the sanctuary. Taking the boys with him, he goes to his customary pew on the right side, while Ma and the girls take their place on the left side of the aisle, each one getting her feet comfortably settled on her little box-like foot-warmer which contains a pan of hot coals.

The church is now filling up rapidly, and soon the dominee enters with the consistory. He pauses for a moment at the foot of the steps leading up to the pulpit, and, with head bowed, silently asks God that he might not preach the Word in the wisdom of men, but in the power of the Spirit. He then ascends the pulpit, and the consistory take their places on a slightly raised platform to his right. From that elevated vantage point, they are well able to keep check on any nodding heads or on any undue activity on the part of the older boys sitting in the rear of the church.

As the small congregation has not yet found it possible to purchase an organ, the “voorzinger” steps up to the “Iessenaar” (lectern) to lead the seated congregation in its psalms of praise. He sets the pitch, and when the congregation begins to drag, regulates the tempo as much as possible with his own singing. Of course, there are no hymns or special music of any kind. The “voorlinger,” also serving as a “voorlezer,” then proceeds to read the Law and the Scripture lesson for the day.

Gurglings from the front row announce the fact that there is a baptism this morning, and as soon as the “voorlinger” has returned to his seat, the dominee begins to read the baptism form. As the happy parents stand to answer the questions in the form, Pa realizes that the parents are but baptized members, never having made profession of faith. This procedure is not customary, nor approved of by the consistory, but it has been tolerated in the case of faithful members. The dominee then descends from the pulpit, and since there is no baptismal font he dips his hand into the basin of water which an elder holds for him and administers the holy sacrament. Reascending the pulpit steps, the minister calls upon the congregation to join their hearts in prayer unto their covenant God. Thereupon, the members of the consistory rise and remain standing until the “Amen” has been pronounced.

It is now time for the offering. As the congregation sings a few verses from another psalm, the gloved deacons take their velvet collection bags, which are affixed to the end of long poles, and shuttle them in and out of the pews, exercising great care (in most cases) not to dishevel with the end of the poles any beards or hair-dos of the worshippers behind them.

By the time the preacher begins his sermon (in Dutch, of course), the two crackling wood stoves and the flickering oil lamps have spread a welcome warmth throughout the sanctuary, for outside it is a bleak, cold day. In fact, some of the hardy farmers, so accustomed to working out-of-doors, become “benauwd,” and here and there a head begins to nod. Some resort to the orthodox remedy for this by standing for a minute or two until they feel refreshed. Others, however, prefer to succumb rather than to stand. One lone figure toward the front of the church, however, stands during the entire sermon. It is deaf old man, with his ear trumpet lifted on high, so as not to miss any of the message. As the sermon approaches being an hour in length, Ma passes a little silver box containing cologne to the other women in her pew. A sudden violent clatter in the stalls outside testifies that even the horses are getting impatient, and two men must leave to quiet the fracas. When tile sermon is concluded and the congregation is singing the last psalm, two more men slip out the back in order to start hitching up their carriages and be the first ones to clip down the street after the service. Descending from the pulpit, the dominee is met by the consistory, who individually shake his hand as a sign tlmt the sermon was sound in doctrine and met with their approval

Pa then hurries out to the stalls to make the buggy ready. Ma picks up her hot soapstone foot-warmer from the “c’storie kamer” stove, and with the children quickly joins Pa. They must not loiter now, for the afternoon service begins at two o’clock, and the distance home and back must be covered in time to allow for their simple Sunday noon meal.