Believers in Jesus Christ must expect tribulation and suffering in this world. Many of our difficulties are brought on by the mere fact that we must live with the consequences of the transgression of Adam, the “one man” through whom “sin entered into the world, and death through sin.” The guilt of Adam, the representative head of the human race, was imputed to his descendants: “Through the one man’s disobedience the many were made sinners” (Rom. 5:19). Thus, “death spread to all men, because all sinned.” But we should keep in mind an additional truth: the rebellion of Adam was in one sense the actual rebellion of every man and woman who would descend from him by natural generation. When Adam ate of the tree, we all partook of the forbidden fruit, for we were in his loins (cf. Heb. 7:9–10). We must therefore live with the consequences of our evil decision: “By the sweat of your face you will eat bread, till you return to the ground” (Gen. 3:19).

Until we return to the dust, we must live with the ongoing process of physical decline in which we slowly and steadily and irresistibly move in a downward direction. “Our outer man is decaying” (2 Cor. 4:16). Paul—like all of us, to one degree or another—knew what it was to get sick. Writing to the Galatians, he reminded them of the past: “You know that it was because of a bodily illness that I preached the gospel to you the first time” (Gal. 4:13). He knew what it was to have a physical malady—probably related to his eyes. He reminded the Galatians of their previous manifestation of love for himself: “If possible, you would have plucked out your eyes and given them to me” (Gal. 4:15).

Suffering also comes to us simply because we are the children of God. The Book of Acts documents the miseries experienced by the apostles as a consequence of their preaching. One of the more noteworthy incidents occurred in Lystra on the first missionary journey. Paul was stoned, dragged out of the city, and left for dead. He never forgot what happened to him. In his long lists of ordeals recorded in the Corinthian epistles, Paul refers not only to being “beaten times without number,” but he also alludes to what happened in Lystra. His horrific suffering is remembered in the terse declaration: “Once I was stoned” (2 Cor. 11:25). Even after the passing of many years, in his last letter, in the shadow of martyrdom, Paul referred to his “persecutions and sufferings” which happened to him at Lystra (2 Tim. 3:11).

The Renewal of the Inward Man

What is remarkable about Paul is the perspective which he had, even as he wrote about being “afflicted in every way…persecuted…struck down….constantly delivered over to death for Jesus’ sake” (2 Cor. 4:8-11). In the midst of such incredible suffering, he declared, “We do not lose heart” (2 Cor. 4:16). He would not give up. He would fight the good fight. He would look to the future with hope. How did he do this? His outward, material body was declining with every advancing year. He had no reason to believe that there would be any let up in the persecutions he would face in the days to come. What was the basis of his optimism and good cheer?

Paul knew in the first place that the work of God in sanctification would continue to progress in his life in the days to come. There would be a real compensation for his increasing loss of physical stamina: “Though our outer man is decaying, yet our inner man is being renewed day by day” (2 Cor. 4:16). Even while his physical body went down hill, his immaterial soul increasingly resembled the moral image of Christ, the Son of God. This renewal would go on day after day, week after week, and year after year.

What was true for Paul is true for every person who turns to the Lord (2 Cor. 3:16). As we discipline ourselves to look within the mirror of Scripture, we behold the image of the glory of God in the face of Christ. Mysteriously and supernaturally, we “are being transformed into the same image from glory to glory.” This powerful work of moral renewal is “from the Lord, the Spirit” (2 Cor. 3:18), but it occurs in connection with our human responsibility to devote ourselves to Scripture, the vehicle which brings the vision of Christ to our hearts. No doubt, many of us, have seen in some of our brethren the reality of the phenomenon described in 2 Corinthians 4:16. Even as their outer man was weakening, the inner man was being renewed. Such grace brings a godly radiance to the life of the believer. In them, we sometimes think that we see more than a man or a woman. The renewal of sanctification seems to bring into the life of a person the face of an angel (Acts 6:15)! Perhaps this is what Paul meant when he reminded the Galatians that they had received him “as an angel of God, as Christ Jesus Himself” (Gal. 4:14).

The Eternal Weight of Glory

There was a second reason for the optimism of Paul concerning the future. The tribulations that he experienced as a disciple of Christ had a beneficial outcome: “For momentary, light affliction is producing for us an eternal weight of glory far beyond all comparison” (2 Cor. 4:17). Here, Paul contrasts the present age and the age which is to come. The afflictions of the present are set against the glory which is to come. While the glory to come is eternal and weighty, the difficulties of the present age are just for a moment and are comparably light. Keep in mind that the afflictions of discipleship are not meritorious. The do not merit the reward of eternal glory. Bearing the cross of discipleship, however, will be followed by glory. If there be affliction, there will be glory. If we will meditate upon the incomparable glory of the coming age, we shall sense that our crushing burdens will bear down with less weight upon us. 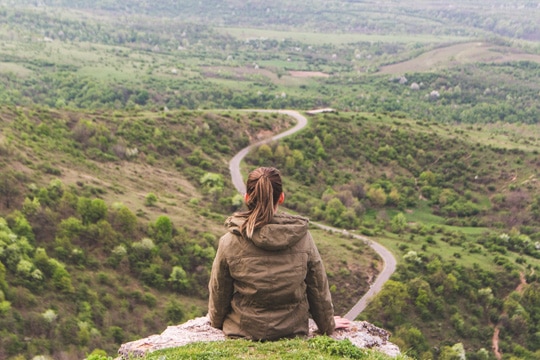 Looking at the Unseen

Another thing that enabled Paul to endure the decline of the outward man and the afflictions of persecution was that he had a proper focus. “We look not at the things which are seen,” he declared, “but at the things which are not seen” (2 Cor. 4:18). Perhaps the best commentary on this statement is found in Hebrews 11. It is true that the patriarchs were promised the land of Canaan as their inheritance. Under Joshua and later David, the land that the Lord had promised finally came into the possession of the sons of Israel. But Abraham lived as “an alien in the land of promise, as in a foreign land, dwelling in tents with Isaac and Jacob” (Heb. 11:9).

While Abraham moved from place to place in ancient Palestine, he beheld the land pledged to him and his offspring by divine covenant. His ultimate focus though was not upon “the things which are seen.” He was focused upon the things which he could not see. “He was looking for the city which has foundations, whose architect and builder is God” (Heb. 11:10). In this sense, Paul was no different. He embraced the same outlook, and he even articulated the rationality of such a principle: “For the things which are seen are temporal, but the things which are not seen are eternal” (2 Cor. 4:18). Like Paul, we must remember that everything that we see is temporary. On the day of the Lord “the heavens will pass away” and “the earth will be burned up” (2 Peter 3:10). Out of this eschatological furnace, a new world will come forth refined from all dross and impurity. We shall inherit “new heavens and a new earth, in which righteousness dwells” (2 Pet. 3:13).

Examining Where We Stand

You and I are on a journey. We are moving toward our final destiny. On which road do you find yourself—on the broad road that leads to destruction, or on the narrow road that leads to life (Matt. 7:13–14)? Jesus exhorted us to get on the narrow road in the appropriate place. “Enter through the narrow gate,” he said. The narrow gate is the gate of faith and repentance, the gate of the embrace of Christ and the renunciation of sin.

Like Paul and Abraham before him, we find—as believers in Christ— that grace has placed us on the narrow way that leads to life (Matt. 7:14). As we journey onward to the city designed and constructed by God, we are called upon by Scripture to assess our spiritual condition. Am I in a healthy spiritual state? This is the question which we must ask ourselves. But how can we assess our spiritual health? A theologian from the patristic church is of great help at this point. Augustine declared, “For a man is never in so good a state as when his whole life is a journey towards the unchangeable life, and his affections are entirely fixed upon that” (On Christian Doctrine, 21).

The words of the Bishop of Hippo impinge upon our consciences. As we journey onward, are our affections entirely fixed upon that unchangeable life that awaits us? May we take heed to the words of John the Apostle: “Do not love the world nor the things in the world” (1 John 2:15). The question of Jesus comes to us who claim to be his disciples: “Do you love me more than these?” May we be able to answer him in the affirmative: “Yes, Lord: you know that I love you” (John 21:15–17).

Dr. Mark Larson is the home missions pastor at Providence OPC in Aiken.