“Thanks be to God for his un speakable gift” (II Corinthians 9:15). With these words Paul concludes a lengthy passage in which he discusses many principles regarding giving. And with these same words we ourselves may rightly begin to examine this important subject.

Our giving to the church and other Kingdom causes should always be a thanksgiving. We should give out of thankfulness—not merely for our material blessings, but above all for all spiritual ones. And since our spiritual blessings come to us only in Christ, the first requirement in true Christian giving is to recognize and accept him who was God’s supreme gift to us on that first Christmas Day. It is because God loved the world enough to give his only begotten Son that we should love him enough to bring our offerings unto him. Our gifts are merely a response to his gift. And yet they must be a response. No matter how liberal our gifts are, if they are divorced from an acceptance of God’s gift, then they are not, and cannot be, pleasing to him.

In other words, if a person has not first received the Christ child as the gift of God, then, no matter how large his contribution to a Kingdom cause, it will not be acceptable to God. If an unbeliever should present the Board of Foreign Missions with a check for $500,000, this action would in no way compare, in God’s sight, with $1.00 from a poor believer. “They that are in the flesh cannot please God” (Romans 8:8). A prominent Presbyterian minister often tells his large congregation before the offering: “If you do not love the Lord, you are not asked to put anything in the collection plate.”

Paradoxical as it may seem, the first and most essential prerequisite for giving is receiving—receiving God’s gift, the Savior. But once that has been done, there are other important principles which we may also learn from Scripture.

THEN GIVE VOLUNTARILY AND CHEERFULLY

Paul tells us that our giving should be voluntary and cheerful. These two ideas are almost inseparable because it is a psychological fact that a person will always be more cheerful about doing something he himself has decided to do than doing something he has been told—or commanded or forced—to do. A young man who has enlisted in the Army for his career will have a different outlook on Army life from one who has been drafted. For this reason, among others, it seems to me unwise to suggest to members of a congregation a specific amount to be contributed weekly by each family. Since, in such a case, the initiative has not come from the givers themselves—since it is not an amount they have arrived at of their own volition—the giving will be less apt to be cheerful. Paul tells us: “Let each man do according as he hath purposed in his heart: not grudgingly, or of necessity: for God loveth a cheerful giver” (II Corinthians 9:7). He urges earlier that the Corinthians’ gift “might be ready as a matter of bounty, and not of extortion” (II Corinthians 9:5). Sometimes in the Christian Reformed Church it appears that giving is matter “of extortion.” If a family has been negligent—either wrongly or for a good reason—about its weekly contributions, the remark is sometimes made that “they haven’t paid their debts.” The use of the words paid and debts makes one think of a gas or electric bill rather than of a cheerful freewill offering to God. Or if a new project is being considered by synod, some will inquire what the “assessment” will be for each family. Instead of viewing the project as a furthering of God’s Kingdom in which it is a privilege to be co-workers with God, the impression is sometimes given that the people are being taxed for something which they have no desire to support.

Perhaps a better approach is simply to present in a vivid way the tremendous needs of this same project, the great value it will be for the Kingdom of heaven, and the fact that if we do not do it, nobody will. It is my conviction that in this way the people will respond more generously and cheerfully than if we use the “debt” and “assessment” approach. 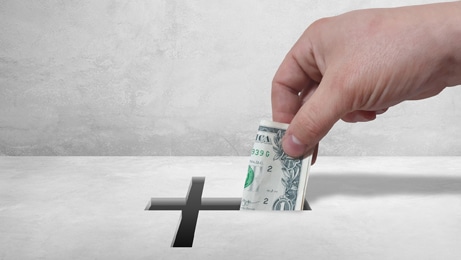 To give voluntarily and cheerfully does not mean that we should not be systematic in our giving. Paul exhorts, “Upon the first day of the week let each one of you lay by him in store, as he may prosper” (I Corinthians 16:2). He does not say that we should give in enthusiastic spurts, now and then. He says it should be a weekly occurrence. To stimulate this kind of regularity, budget envelopes are extremely helpful. The term budget envelopes frightens some people because they usually associate it with pledges. On such pledge cards the giver makes a promise to a church or denominational cause to give so much per week, and if he fails to do so he is dunned at tile end of the year for what he has not paid.

As we indicated above, we believe that such a system takes away the cheerfulness of giving and ought to be avoided. But budget envelopes can also be used without any pledges at all or with—which is an excellent stimulus—“faith-pledges.” A faith pledge is a pledge to God alone of how much the giver, in dependence on him, hop e s to be able to give each week. He may give an indication of this to the deacons so that they will better be able to plan for the coming year, but this is not necessary. Once he has decided on the specific amount, or percentage, of his income, he should lay that aside every time the paycheck arrives or the profits have been determined. He should not spend his money on all his needs and desires first and give the remainder, if there is any, to God, The reverse should be the case. First he should set aside the amount he has decided to give to God, and then spend the rest on his own needs. But if, by reason of a prolonged hospital confinement, for example, or a severe crop failure, he is unable to contribute as he had planned, no mention should be made of his “paying his debts.” It is a matter between the giver and God alone.

Another concept which Paul sets forth in this passage is that each one should give according to his ability. Our federal government closely adheres to this principle in its income tax policy. Not only does the tax increase for each slight increase in income, but also cognizance is taken of the size of the family (by personal deductions), medical expenses, and contributions to church or charity. In this way, although the voluntariness is not present, at least the demands laid on the wage earner are as fair as is possible in such an enormously complex society.

Therefore, it seems unwise for a consistory to come to the varied members of the congregation with an “average amount” to be contributed by each family each week. Even though the consistory may insist that this is not a compulsory figure for every person, undesired consequences may nevertheless often follow. An extremely prosperous business man, with one child, may too easily be lulled into feeling that he has “done his duty” if he gives somewhat more than the $3.25, for example, set by the consistory. On the other hand, a father of nine children, employed by a local shop, might feel worried and guilty because he is unable to give even half of the suggested amount. Paul assures us that giving should be “according as a man hath, not according as he hath not. For I say not this that others may be eased and ye distressed” (II Corinthians 8:12, 13). The amount should not be decided on by those who cannot possibly know all of the various circumstances of the many families in the congregation. It should, rather, be arrived at by each individual family as it prayerfully (emphasis on the word prayerfully) examines its own resources and responsibilities. Experience proves, incidentally, that, normally speaking, the church will receive more from its members if they ask God how much they should give rather than if the consistory tells them.

In the familiar story of the poor widow (Mark 12:41–44), Jesus tells us that the many rich who cast much into the treasury were not giving, proportionately, as liberally as the poor widow who gave only two mites. For “she, of her want did cast in all that she had, even all her living.” For some, $100 a year might be liberal; for others, $1,000 a year might be niggardly.

Such sacrificial giving, though not demanded by a direct commandment, is set forth as a good example to be followed, and as a proof of the “obedience of your confession unto the gospel of Christ” (II Corinthians 9:13). Paul reminds us that “He that soweth sparingly shall reap also sparingly; and he that soweth bountifully shall reap also bountifully” (II Corinthians 9:6).

The needs of the Kingdom of God are limitless. If a local church has its new building paid for, has sufficient funds for the proper running of its own organization, and has met all of its classical and synodical quotas, no member may ever say: “There, that’s all I need to give. Everything is taken care of.” That would show a limited vision, indeed, of the work to be done. The Back to God Hour could add to its networks endlessly. Calvin Seminary needs new buildings for the new campus. Westminster Seminary, not backed by a denomination. is in constant need of funds. There are countless cities -not to mention towns and villages—in our United States which have not a Reformed witness. Foreign missions must be extended. The institutions of mercy ever need to expand and improve. And the Christian schools never have sufficient funds to pay their teachers adequately or to keep the tuition within the reach of many who would like to avail themselves of Christian education. No, we can never say that everything is taken care of, and we need give no more even if we are able to. We should never stop short of sacrificial giving. If our own local church does not need more money, the causes which do are legion. We are, says Paul, to have the same spirit of Jesus Christ who, “though he was rich, yet for your sakes he became poor, that ye through his poverty might become rich” (II Corinthians 8:9).

God commands. But he also enables. God commands us who are dead in trespasses and sins to believe in his Son. Yet he proceeds to quicken us by his Holy Spirit and give us the gift of faith. Scripture everywhere exhorts us to holiness. But then it tells us that if we have attained to any measure of holy living it is God who is working within us both to will and to work (Philippians 2:13). In like manner, Paul admonishes us to give liberally of our substance. Yet in the same breath he tells us that, “he that supplieth seed to the sower and bread for food, shall supply and multiply your seed for sowing” (II Corinthians 9:10). There are many who can testify that when they gave “beyond their power,” they received some sort of windfall which compensated for their liberality, so that they were not in want. God’s promises are many and rich, and yet how often we neglect, or are afraid, to claim them! May we claim his promise that he will give us seed for sowing. And may we believe Paul when he says that “God is able to make all grace abound unto you; that ye, having always all sufficiency in everything, may abound unto every good work” (II Corinthians 9:8).