(An abridgment of a chapel talk delivered at Calvin College, November 11, 1953)

The final volume in Winston Churchill’s monumental account of the Second World War carries these words of dedication in which the theme of the volume is summarized:

How the Great Democracies triumphed and so were able to resume the follies which had so nearly cost them their life.

These read like the words of one traveling without hope toward the portals of doom.

Can it be that all the suffering. the heartbreak and the sacrifice in that Global Conflict were poured out merely to afford us another opportunity to go on in the way of folly? What a horrible thought! And what a contemplation on this particular day, November 11, Armistice Day, when some of us here in chapel can recall what happened 35 years ago. That war ended that preparations might commence for the next struggle. And the next struggle ended, says Churchill, so that we might resume the follies which had so nearly annihilated us. 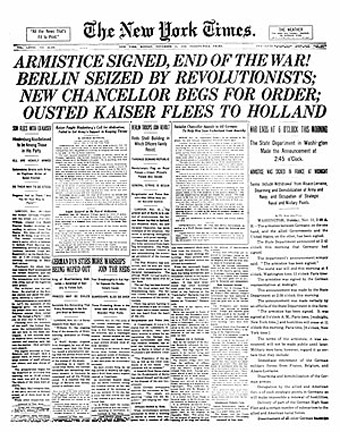 Is it any wonder that people are asking in desperation, “’There is there something that can stand up against all this? Where is there a technique, a perspective, a category of thought, that can serve to disentangle us from these follies which repeatedly ensnare us? We have moved from the A Bomb to the H Bomb. What will the I, J, K Bombs be like?

The International Review of Diplomatic and Political Science gives us the following official figures on what the Second World War cost:

Over 21 million men killed in battle.

Over 29 million people wounded, mutilated, or incapacitated for work.

Over 40 million were evacuated, deported or interned.

Over 25 million homes were reduced to ashes.

It is in such a context of catastrophe that you young people are maturing. Exactly what the future holds for you cannot be foreseen. But God holds the future. He has the last word because he is the first word. Your Christian education is the best preparation, indeed, the only satisfactory preparation, for that kind of service in which God will be honored for what he is, and life will be exploited for what it is.

A basic tenet in our Christian educational philosophy is that the people who have their citizenship in heaven generally prove to be the best citizens on earth. There is no tyranny that can finally prevail against the “man of God” whom the apostle Paul describes as “complete, furnished completely unto every good work.” Centuries before Paul wrote those words the Psalmist anticipated them when in Psalm 143:10 he prayed, “Teach me to do thy will: for thou art my God: Thy Spirit is good: lead me in the land of uprightness.”

There is the real man, the loyal citizen. He knows how to move out into life horizontally, and to do it effectively because there is first in his life the vertical, covenantal direction. He will live uprightly, yes, he passionately desires to do so, as all individual, as a parent, as a citizen, as a participant in social action, only because he has first acknowledged , “thou art my God.” A schooling that stresses this covenantal direction is the true preparation for life. Put this where you will never forget it: Unless we have within us that which is everlastingly above us, we simply do not know what to do with that which is round about us.

Only then will we find the confidence which the psalmist reflects in that great song of the Church:

Blest be the Lord, my rock, my might, my constant Helper in the fight,

My shield, my righteousness,

Who doth my enemies subdue, my shelter in distress.

Touch Thou the hills, the mountains rend,

And they shall smoke and name;

As arrows send Thy lightnings out

To put Thy enemies to rout,

And fill Thy foes with shame.

Now I will sing a glad new song,

Thy praise, O God, I will prolong,

For Thou hast heard my prayer;

Salvation Thou dost give to kings,

Thy own dost keep, with sheltering wings,

From hurtful sword and snare.