There it was, right in the Minutes: “Consistory decided, by motion, that the church would provide pipe tobacco for the Elders and Deacons for use during the meetings. It was also decided not to provide cigars, due to cost and widely differing preferences.”

The wording is mine, because I’m operating on about 20 years of memory and don’t have access any more to the official records, but tile fact is that this item did appear in the minutes of the CRC in which I began my ministry. The debate, if memory serves, took place in the 30s. The brethren did, indeed, smoke pipes and cigars during the meetings, producing a “blue haze so thick you could cut it with a knife,” as one old timer recalled.

About a year ago, a reader of this column wrote me an impassioned letter pleading for me to write on the subject of smoking tobacco. It was his opinion. Simply put, that such use of “drugs” was sinful, and it ought to be the position of Reformed churches that all such use ought to be at least discouraged,and preferably forbidden. At the time, I wrestled a bit with the idea, due in part to the way I had been raised and the Biblical approach I had always taken to the issue, and have always expressed on the subject. Besides, many fine Christians I know smoke. Why poke a stick in a wasps nest, I thought.

But some recent revelations have forced me to do a rethink of my position. I recently heard, on a TV documentary, an updated report on the consequences of smoking on the human body, and the impact of these findings on the national health-care situation. The time has come for me to take a stand. 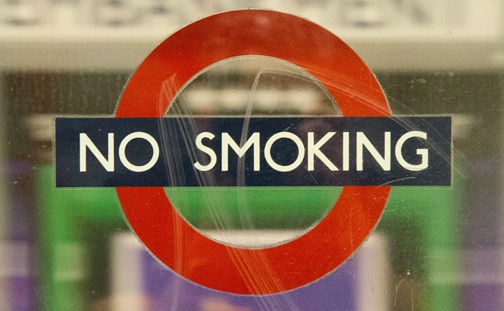 I smoked for almost 20 years. I began when I was in my mid-teens. It was “cool” to smoke, or so we thought. Although my Dad was opposed to my starting, he smoked, and so didn’t have too much to say, especially when I found support in claiming that the smoker’s crowd after church on Sunday mornings was as large as the non-smoker’s crowd. And, since there were no Surgeon General warnings on the cigarette packs back then, we didn’t know for sure that it was bad for you (although the hacking and wheezing were strong hints that it was). Oh, to be sure, Mom tried. Regularly, the Reader’s Digest article, “I am Joe’s Lung,” appeared on my pillow. Nice bedtime reading! (She must have bought reprints by the bundle of 50!) But I continued to smoke. Cigarettes mostly, at first. Then I shifted to a pipe. Loved the smell, the taste. Ignored the breath and the stench of the juice at the bottom of the bowl.

I quit about 12 years ago. I’m not proud of the fact that it took me about 10 tries to stop, or that I still walk past a good pipe tobacco shop and feel a surreal attraction to the wonderful smells. I am grateful for the grace of God that enabled me to kick the habit.

But I’m increasingly bothered that the rhetoric I used to use is still used by so many today. You know, “I use it, I don’t abuse it. I can quit anytime I choose.” Or, how about the all-time favorite smoker’s self-defense quote from the Bible: “For everything God created is good, and nothing is to be rejected if it is received with thanksgiving…” (I Tim 4:4).

TIME FOR ANOTHER LOOK

What bothers me is that the game has changed. The stakes are so profoundly different than years ago. And that is simply because we know so much more about smoking and its side-effects today. Consider:

• We know what it does to the lungs, and how smoking is, in fact, the principal cause of lung cancer. I have been pastor to many dear people who died of cancer that originated in their lungs. Every one smoked. It is a horrible death; and even before you die, it is a horrible illness to battle, with horrible effects upon loved ones who watch you die by inches.

• We know that it is the primary cause of emphysema, that awful respiratory disease that inhibits one from taking a deep breath or exhaling completely. I’ve been pastor to folks who were tethered to an oxygen breathing apparatus for years, unable to leave their homes, unable to sleep lying down because they were required to stay in a recliner or they wouldn’t be able to catch their breath. I’ve watched their wives and children repress rage at what they did to themselves because they wouldn’t quit smoking. And yet, strangely, I’ve watched not a few emphysema patients who still would sneak a smoke when they didn’t think anyone was watching. Even more shocking, I witnessed one family where Dad was dying of emphysema, and all his sons were heavy smokers. Not one could quit.

• We know it is a major contributing factor to heart disease. I sat with a heart patient when his doctor said to him, blunt and to the point: “If you keep smoking, don’t bother coming back to me. You won’t live long, and I won’t play games with you.” (He kept smoking.)

• We know that smoking is incredibly expensive. Not only is it personally costly (I was shocked to notice the other day that vending machine cigarettes were $3.00 a package! When I was smoking, we griped when the price reached $3.00 a carton!), but it is incredibly costly to the public welfare. Statistics indicate that, were smoking-induced illnesses removed from the health-care equation, much of the crisis in health care costs in the US would be eliminated. Labor statistics reveal that smokers miss enough additional work days to be considered significantly higher risk employees than non-smokers.

And yet people smoke. They smoke because smoking is a tar and nicotine addiction, and a strong one at that. They smoke because tobacco companies hire slick advertising companies that have found ways to seduce people into behavior that no one on earth would argue is good for you. Imagine, they actually try (and succeed!) to seduce people to smoke because it is supposed to look sexy (even though your breath stinks!); because it shows you to be a rugged individualist who refuses to be like everyone else (so are people who play Russian roulette!); because you’ll he one of the “beautiful people” (ever see a picture in a cigarette ad of a person who’s struggling for breath, coughing up his lungs, or on oxygen? Of course not. Only beautiful people!)

And Reformed Christians smoke. And that bothers me even more. Because the heritage of the Reformation has always been one in which the insights of God’s creation, opened up and observed by diligent study of His world, have been highly esteemed. We have been different than fundamentalists on that score, challenging and accusing them of fearing science, fleeing its discoveries and hiding from its insights. But on this issue, too many of us have a pervasive stubbornness in us that refuses to accept what the doctors say. Even C. Everett Koop, the former Surgeon General of the United States and a conservative Presbyterian (PCA, I believe), found it hard to understand that the Christian community would persist in defending the practice of smoking. It made no sense to him, and it makes no sense to me.

Smoking may no longer be considered by the Reformed community to be a matter of “adiaphora,” of ethical neutrality, as the consistory whose debate was reported at the beginning of the article, believed. Today’s greater knowledge lays upon us a greater responsibility. Smoking is wrong. We know it, and we must deal with it. If you smoke, stop. If you can’t stop alone, get help. And, if you are an elder or a deacon, it is time to face up to the issue pastorally but squarely. Talk to your people about their smoking. Use this article, if you wish, as a discussion starting point. Talk to them about their Biblical responsibility to be good stewards of their bodies. Talk to them about the stewardly use of their resources, including the money spent on tobacco and the increase in health costs. Talk to them bluntly about our own Biblical and creedal heritage, and what we confess regarding the 6th commandment:

The sins forbidden in the sixth commandment are, all taking away the life of ourselves…wounding, and whatsoever else tends to the destruction of the life of any (Westminster Larger Catechism, A. 136).

I am not to harm or recklessly endanger myself either (Heidelberg Catechism, A 105).

We decry what drugs are doing to our cities. We lament the scourge of AIDS. We cluck our collective Reformed tongues at the sexual practices that cause STDs. All of these are behavior-induced crises, and we who are Reformed rightly call for the application of the Word and Spirit of God to address these critical cultural issues at the heart. There can be no change, we say, unless we understand that the change originates in hearts, that it is fundamentally religious.

But we seem to have a blind spot when it comes to smoking. Oh, I understand it fully; I smoked for 20 years. But I can no longer justify it. Neither can you.

Dr. Sittema is a contributing editor of The Outlook and pastor of Bethel CRC in Dallas, TX.