[He] not only, as it is signified in the Gospel, passed by the prostrate wounded man, as did the priest or the Levite, but by an ingenious and novel cruelty rather would slay the wounded man by taking away the hope of salvation, by denying the mercy of his Father, by rejecting the repentance of his brother. (Anonymous, “Against Novatian,” chap. 1)

Some bribed a Roman official to get a certificate saying that they had offered a sacrifice to the gods. Others made the sacrifice and breathed a sigh of relief. But now their consciences were troubled: they had fallen away from the Savior they once professed. Would the church embrace them in their repentance even though they had publicly denied the Son of God, torn apart the fellowship of the saints, and brought ridicule to the church’s witness? Novatian’s answer was to declare that nothing could reopen the barred gates of heaven to those who had denied Jesus. 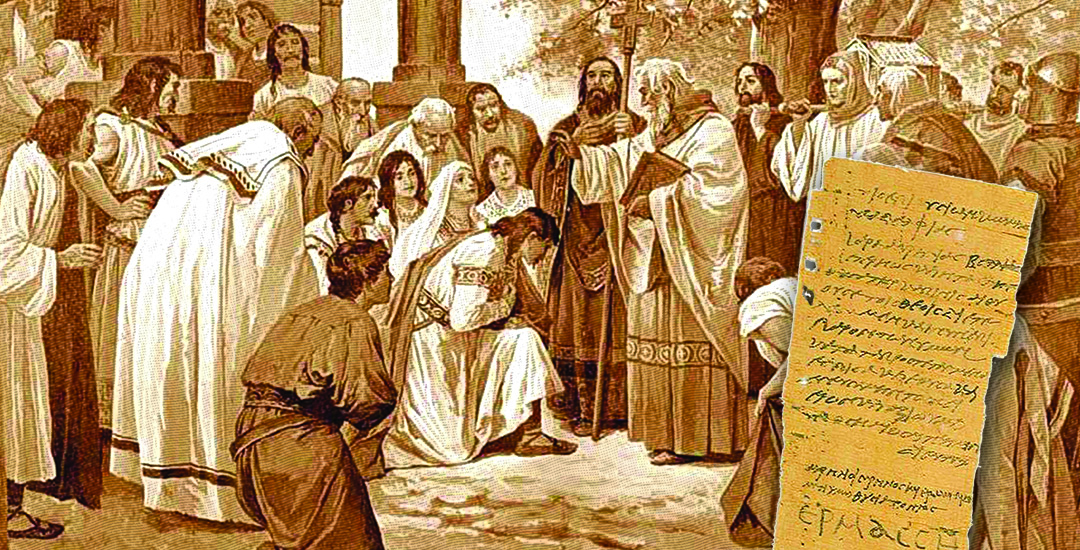 For Emperor Decius Neueius, there was no separation between politics and religion. With Germanic tribes threatening the fragile borders of his empire, and famine and disease threatening the peace within its borders, Decius believed that the only method for regaining the pride of Rome was to forcibly return the empire to ancient Roman civil religion.

By regularly making sacrifices to the gods, the empire would regain their favor and its past glory. In AD 249, Decius decreed that all Roman citizens and subjects of his empire, with the exception of the Jews, must make an annual sacrifice to the Roman gods. Those who made the sacrifices were given a certificate (libellus), but those who were found not to be carrying a valid certificate were subject to fines, imprisonment, and potentially execution.

With the tremendous growth of the church by the middle of the third century, Decius was not interested in executing every Christian in his empire, but merely to coax them into compromising their faith. So the emperor softened the pressure by allowing Christians to be free to worship Jesus as they wished for the rest of the year, but only if they first made the sacrifice and earned a libellus. The least effort required to obtain a libellus was offering a mere pinch of incense. But that simple gesture would cost the Christians much more. Making the sacrifice would force Christians to acknowledge that “Caesar is Lord.” No faithful Christian could make that confession since it was the heart of their witness that “Christ is Lord.”

Sadly, many decided that the compromise was worth the protection they would gain for their families and their livelihoods. But whether they personally made the sacrifice or bribed an official to sign a libellus on their behalf, the church excommunicated those who had lapsed into the idolatrous compromise. Owning a libellus, whether by action or by pretense, was an act of apostasy.

But what about those who were excommunicated but later confessed their apostasy and expressed a desire to be restored to the church? Would the church receive their repentance and welcome them back into the communion of the saints? Those who possessed a libellus but were repentant of their compromise were known as libellatici, and those who had personally made a sacrifice were known as sacrificati. With the heaviness of guilt upon their hearts, they sought the forgiveness of Christ and his church.

Him I Will Deny

While the persecution under Decius was decimating the church, this question of restoring the lapsed was threatening to divide the church from within. For the church in Rome, its bishop had been martyred and Cornelius was elected in AD 251 to take his place. This angered Novatian, a fellow presbyter in Rome. Scholars wonder if Novatian was driven by jealousy, but his letters make it clear that he disapproved of Cornelius’s leniency for the libellatici. He based his objection on Matthew 10:32–33 (English Standard Version): “So everyone who acknowledges me before men, I also will acknowledge before my Father who is in heaven, but whoever denies me before men, I also will deny before my Father who is in heaven.”

For Novatian, to permit the libellatici to return to the church, regardless of the sincerity of their repentance, would overrule the authority of Christ as judge and tarnish the purity of the church. Therefore, the church could not offer forgiveness for the most heinous of sins, and any bishop who restored those who had fallen (lapsi) into apostasy was condemned by Novatian as illegitimate. Baptisms performed by bishops considered to be illegitimate were annulled, while Novatian and his followers claimed to be the true and pure church which alone could dispense the grace of Jesus Christ.

It is true that some bishops were very quick to offer restoration to the libellatici with little more than an expression of regret for their sin of apostasy. But most of the church walked a middle ground between the schismatic intransigence of Novatian and the option of easy leniency. Cornelius was supported by Cyprian, the bishop of Carthage, who wrote that the lapsed could be reinstated through a process of penance. Otherwise, they could not possibly be saved because “he can no longer have God for his Father, who has not the church for his mother” (Treatise 1, The Treatises of Cyprian, chap. 6). Cyprian was concerned to keep the “narrow way” from becoming too broad, but neither could the way to Christ be closed to those who repent of their sins and return to faith in Christ (Matt. 7:13–14).

The process of reinstatement came to be known as penance, although in the third century no one was describing it as a sacrament. Only much later would the Roman Catholic Church elevate penance to that status. Depending on the severity of their sin, repentant libellatici were expected to give evidence that their hearts were truly grieved by their apostasy, and that they truly longed to be covered by the grace of Jesus Christ. For the sacrificati, some proposed that they could not be restored to the church until just prior to their deaths, whether by martyrdom or natural death, to demonstrate that they were genuinely committed to their Savior. But for as lengthy as the process of penance could be, the church refused to prevent repentant sinners from ever being restored.

Come Out as Conquerors

This compassion for the repentant is expressed scripturally in the treatise “Against Novatian.” Written anonymously by a contemporary of Cyprian and perhaps also an African bishop, this treatise rebuked Novatian for crushing the souls of the repentant. But in this rebuke, the restorative ability of the gospel comes to the fore. The writer does not trivialize the sin of apostasy or the damage that has been done to the church by the libellatici, but neither does he restrict the compassion of God’s grace. Referring to the parable of the Good Samaritan (as quoted earlier in this article), the writer warns that Novatian’s schism does far more damage than even the indifference of the priest and the Levite who passed by the wounded man. Novatian “rather would slay the wounded man” than to restore a sinner to Christ.

But what of Matthew 10:32–33? Are these words of Jesus a permanent condemnation of those who fall away and deny him? The writer urges the Novatians to consider the disciples who abandoned Jesus despite their insistence that they would not. Even Peter denied him three times and was restored. How often the Lord reminded his wayward people of his judgment against those who remained in their sins, while calling them to return with repentance! The writer quotes Psalm 89:33, which says, “But I will not remove from him my steadfast love or be false to my faithfulness.” The same message was given to the prophet Ezekiel, through whom God spoke to his people who feared they had no hope:

“And you, son of man, say to the house of Israel, Thus have you said: ‘Surely our transgressions and our sins are upon us, and we rot away because of them. How then can we live?’ Say to them, As I live, declares the Lord God, I have no pleasure in the death of the wicked, but that the wicked turn from his way and live; turn back, turn back from your evil ways, for why will you die, O house of Israel?” (Ezek. 33:10–11)

Similarly, the parables of Luke 15 proclaim the joy in the heart of God when a lost sheep, a lost coin, and a lost son are returned. It is clear, then, that not until the Day of Judgment arrives will Jesus stand before his Father and deny those who are unrepentant. Until that day, “Let us give our full confession, since the powers of heaven rejoice over our repentance, all the angels rejoice, and Christ also rejoices, who once again with full and merciful moderation exhorts us, laden with sins, overwhelmed with crimes, to cease from wickedness” (“Against Novatian,” chap. 18).

Most fittingly, the writer concludes by entreating Novatian and his followers to repent of their schismatic pride. “Let there be first in your hand that prayer full of confession” (chap. 18). Whether by the schism of Novatian or in the fall of the libellatici, both are lapses from which the grace of God is enough to restore the sinner. That is clearly seen through the “twofold trial of persecution: the first, in which they who have lapsed have fallen conquered; the second, in which they who have fallen have come out conquerors” (chap. 6).

Rev. James Sinke is the pastor of Bethel United Reformed Church. He and his wife, Andrea, live in Woodstock, ON, with their four children.