Congregational singing is a “must” for the Church of Jesus Christ when met for public worship.

The people of God are and always have been a singing people. Even the Church Triumphant as depicted in John’s Revelation is heard singing “the song of Moses the servant of God, and the song of the Lamb” (15:3). 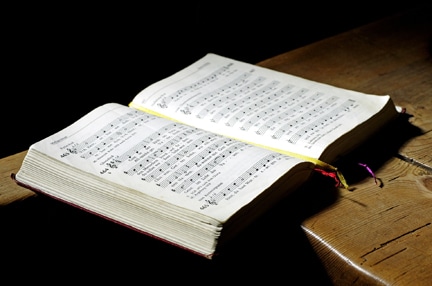 One of the principal reasons for singing at divine worship is that by this means it is possible for the multitude of worshippers to voice their praises at once and in an orderly fashion. As we have been saying, worship is the meeting of God and his people in official service. Therein God speaks to his people by way of his Word, which awakens in the worshippers the desire to respond in obedience and praise. This is done representatively by the officiating minister, and can be done because of the organic spiritual unity which exists among members of Christ’s Church, which is his Body.

In addition, there is a deep satisfaction in speaking ourselves of the things that well up in the worshipping heart. For this reason many churches have the entire congregation recite in unison the Lord’s Prayer and the Apostles’ Creed. But even this is not to be compared with our united testimony in song. We feel that the common recital of prose or even poetry cannot begin to rise to the emotional heights attainable by the united expression of the strongest feelings of the heart in song. To illustrate: imagine a large gathering merely reciting our national anthem, or singing it.

The communion of the saints comes to expression in congregational singing. Strangely enough, there are individuals who come to church worship services and do not take part in congregational singing, even though no valid reason exists for their neglect of this worship feature. If any of our readers belong to this group, we think it would be well for them to examine themselves, asking why it is that they do not join the congregation in singing.

The rich treasure of Zion’s songs reveal a wide variety of spiritual experience. The soul that has tasted the goodness and graciousness of the Lord in the salvation wrought by God in Jesus Christ is delighted to join the congregation in the singing of such a stanza as:

O come, my soul, bless thou the Lord thy Maker,

And all within me bless His holy Name;

Bless thou the Lord, forget not all His mercies,

Having thus summoned his soul to praise the God of his salvation, the worshipper issues this mighty refrain:

Bless Him, ye angels, wondrous in might, Bless Him. His servants that in His will delight.(1)

One of the deepest concerns of the pious heart is to keep one’s feet upon the way of righteousness. In bitter experience he recognizes that he often falls to do that which he really loves, and that he practices the things which he really despises. He is oppressed by the knowledge that he is prone to wander, and therefore he can whole-heartedly join in when the congregation sings this prayer:

Dwell in me, a blessed Spirit!

How I need Thy help divine!

In the way of life eternal,

Keep, a keep this heart of mine!

Dwell in me, O blessed Spirit!

For the home of bliss that waits me

As you well know, one could so continue to give examples of the songs the Church loves to sing in expression of the spiritual experiences of the believing heart. Those who do not find themselves stirred to join the congregation in the singing of such songs might well ask themselves if the reason is not that they have no such spiritual experience which compels them to join in the congregational expression of these experiences in worship. Should this be the case, it would be well to face the sad truth that you have no real part in worship even though you occupy space in the church pews.

Others hide behind the objection that they cannot sing well. And there arc individuals who cannot hold a tune no matter how hard they try. Some can never learn to sing on pitch. Fortunately, they are exceptions to the rule. However, even this need not prevent a person from taking part in the congregational singing. My own mother was one of those who cannot keep a tune. But it never stopped her from singing. And it shouldn’t have, even though at times we must hear some saying that they are annoyed by the poor singing of such people. I realize that people afflicted with the inability to sing on pitch ought not to shout at the top of their voice. On the other hand, let us not be too easily bothered. Looking at the facial expression of such a worshipper one can sometimes read plainly tIle deep satisfaction of a soul speaking with the congregation to God in prayer and adoration. Congregational singing is something altogether different in that respect from the singing of an organized choir.

Another excuse given for failure to participate in congregational singing is that of unfamiliarity with the song being sung. This is quite possible, of course, but it should happen only once with any given song. When the congregation sings a song strange to you, it is to your advantage to get to know that song. I know that several excuses are offered at this point, having heard them often. For example: one has no copy of his church’s hymnal in his home. Another fails to own a musical instrument which will help him to learn new songs.

It is my opinion that any church member ought to be ashamed not to own a personal copy of the book of songs used in his church. Such a book represents quite often a very large bargain in today’s religious book market! In addition to the songs many contain such invaluable information as the denominational creeds, the church order, the forms for the sacraments, installation of officers, prayers, etc. This is in addition to the songs themselves, which are a veritable treasure store so great anyone not familiarizing himself with them is robbing himself of an unusually wonderful blessing.

May I cite an example taken from the life of my own father? When I went to church services with him as a boy it was his custom to teach me the unfamiliar songs of a particular service as we were walking homeward together. In addition, we would be certain to sing such songs at the dinner table as part of our family devotions.

So also the Christian school can be a great boon to the worship of the congregation. Children should be taught to sing the songs of the people of God at an early age. Regardless of the objection some voice to the effect that such songs are beyond the comprehension of the child at a given stage, the fact that these songs have a way of winging themselves into the hearts of even very young children,—increasingly revealing to them the depths of their meaning—warrants their being taught the songs used in public worship early.

Let us make the songs of the Church our very own! These are the songs that endure the ages. Many of them have been sung for centuries and yet they never grow old. They are continually the interpreters of the experience of our Christian life. By means of them the congregation of the living God continues to speak to the heavenly Father, and in that speaking finds the peace that passes understanding.