Note: This is the eleventh of a series of articles on common contemporary viewpoints, which are contrary to orthodox Christianity.

The Word “simplicity” occurs four times in the English Bible (2 Sam. 15:11; Rom. 12:8; 2 Cor. 1:12, 11:3) . In none of these does It occur with the sense of “elementary,” as meaning the opposite of “complex.” In each case the word “simplicity” is used to describe a psychological, moral or spIritual characteristic of human persons. It is never used as a description of the doctrines of the Christian Faith, or the Gospel of Christ.

There is, of course, a certain sense in which “simplicity” can truly be affirmed of the Gospel of Christ. It is simple in the sense that it is perfectly adapted to human need, and by the special work of the Holy SpIrIt not only the learned, but the unlearned, and even young children, are enabled to grasp its truths to the saving of their souls. But as the term “simplicity” is often applied to the Gospel, or the system of revealed truth, it must be adjudged to be an illusion and a false ideal.

Truth is inherently complex, because God is inherently complex. God exists from all eternity as one single Being, in three mutually complementary, co-equal divine Persons, the Father, the Son and the Holy Spirit. The Father eternally begets the Son; the Son is eternally begotten by the Father; the Holy Spirit eternally proceeds from the Father and from the Son. This mystery of the Trinity reveals something of the inherent complexity of the Godhead.

Truth comes from God, whether in his general revelation in nature, or his special revelation in Scripture. Clearly truth in the realm of nature is exceedingly complex. Once men talked of atoms as the ultimate, irreducible particles of matter. The very word “atom” means, literally, “undivided” or “indivisible.” But the modern science of physics has disclosed that every atom is an amazingly complex universe in itself. And the farther the physicists push their researches the more amazing complexity they discover within the atom, which itself is so small that it barnes the imagination to conceive of it.

Christian truth, which proceeds from the same God, is complex, too. The Bible which reveals Christian truth to us is complex. The Bible is not a simple book, but a complex one. A large volume, written over a period of some 1400 years by some 40 different writers, it not only deals with many subjects from many angles, but it contains insoluble mysteries and unexplainable paradoxes (apparent contradictions).

Too often the plea for “simplicity” in religion is merely an excuse for mental laziness, an alibi for not thinking, an evasion of the depth and richness of divine truth. We should realize that we are commanded to love the Lord our God, not only with all our heart and sou I and strength, but also with all our mind.

“We do not want any deep theological doctrines,” many people say; “just give us the simple Gospel of Jesus Christ, and that will satisfy our souls.” This sounds very pious, but when considered closely it will be seen to involve an irreligious can tempt for a large portion of the truth which God has revealed in his Word. What is this “simple Gospel of Jesus Christ”? How is it to be stated or defined? 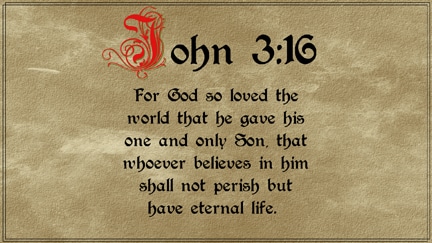 Perhaps the answer is given that John 3:16 is a sufficient statement of it: “For God so loved the world, that he gave his only begotten Son, that whosoever believeth in him should not perish, but have everlasting life.” But is the thought of this verse really simple? Alas, this favorite verse of millions of Christians fairly bristles with theological questions that have to be answered if the verse is to have a definite meaning for us.

Does the first clause (“For God so loved the world”) describe the extent of God’s love for mankind, or the intensity of it? Is the emphasis on “so” or on “world”? What does “world” mean in this verse -is the idea that of universality, or that of wickedness? What is meant by saying that God “gave” his Son? Does this mean that God “gave” his Son to become man, to live a perfect life under the law, to suffer and die as a Substitute for sinners on the cross, to rise again the third day? If that is what it means, then does not this little word “gave” involve in its meaning here the whole doctrines of the Incarnation, the humiliation and exaltation of Christ, the atonement, Christ’s active and passive obedience, the Covenant of Grace?

Again, why was it needful for God, in order to put his love [or the world into action, to “give” his Son? Was this because of the lost, guilty and sinful condition of the human race? If that is the meaning, then does not this verse in its true meaning really involve the whole doctrines of the creation of mankind, the covenant of works the fail, original and actual sin, total depravity and total inability? If God “gave” his Son in order to save men from sin, must we not know what sin is in order to grasp the real meaning and force of the word “gave”?

Further, what is the meaning of the word “perish” in John 3:16? Does this refer to the death of the body, or to something that comes after the death of the body? If the latter, then does it mean an age-long or an eternal penalty? What is the essence or nature of it? If “perish” is to be more than just a six-letter word to us, do we not need to have a grasp of the Biblical doctrine of eternal punishment, or hell?

Someone may say, Why spoil the beautiful simplicity of John 3:16 by raising all these theological questions? Why not just keep the verse in its beautiful, childlike simplicity, just as it stands?

This sounds very devout, but it is really very foolish. For John 3:16 does not stand all by itself in “beautiful simplicity.” It forms part of a discourse of Jesus—his discourse addressed to Nicodemus. It must be taken in that context if its true meaning is to be grasped. For example, verse 13, which speaks of Christ as “he that came down from heaven” and then calls him “the Son of man which is in heaven,” must be taken into account. So also verse 14 which speaks of the necessity that “the Son of man be lifted up,” must be reckoned with.

Neither does Jesus’ discourse with Nicodemus stand all by itself. It forms part of the Gospel of John, and must be taken in its context. Further, it forms part of the New Testament, and must be taken in that context; and it also forms part of the whole Bible, and must be interpreted in the light of that can text. In other words, really to grasp the true meaning of John 3:10 we must take it in its setting of the whole Bible. It cannot be understood “in beautiful simplicity” as if it stood alone. Really to grasp its meaning, we have to have a knowledge of the whole system of revealed truth: God, Christ, creation, the covenant of works, the fall, sin, the covenant of grace, the atonement, saving faith, hell, heaven, eternity. All these doctrines, and more, are really involved in the meaning of John 3:16. Nor are we thus reading something into the verse that is not there. The language of John 3:16 is indeed simple, but the ideas involved in the verse are as complex as the whole system of revealed truth. The interpretation of the verse that takes account of these various doctrines is the true one; any other “simple” interpretation is only an illusion.

The person who rejects “theology” and say that he wants only “the simple Gospel of Jesus Christ” only deceives himself. What he calls “simplicity” is not really simplicity; it is only vagueness. The person who wants to take John 3:16 “just as it stands,” without facing any of the theological questions which this verse raises, may think he is insisting on “simplicity” and is religiously superior to other Christians who want definite and clear-cut knowledge, but in reality he is only hiding his head in the sand like the proverbial ostrich, and saying that truth is not important.

We do not insist on such “simplicity” in any other field of life. Suppose a man goes to a drug store and says, “Please give me a package at sulphate.” The clerk inquires, “Sulphate of WHAT? Copper sulphate, aluminum sulphate, magnesium sulphate, sodium sulphate, potassium sulphate? Some of them are used as medicine, add others are poisonous, you know.” Can you imagine such a customer replying: “Let’s not raise any technical questions about chemistry. I only want some sulphate. That’s perfectly simple. I believe in the simple life. Just give me a package of sulphate, like I asked for, without raising any scientific questions.”

But in religion, it seems, many people have the idea that evasion of exact questions of Christian truth is somehow more “spiritual” than facing the questions and seeking out the answers. Years ago at a summer conference I heard a popular Bible teacher say that when asked “Are you a Calvinist or an Arminian?” he would invariably reply, “I am a Biblicist.” The reply impressed me as intellectually dishonest and also childish. On the points in dispute between them, Calvinism and Arminianism are mutually contradictory systems. Both cannot be true. One or the other must be true. Gael either is, or is not, sovereign; man either is, or is not, totally depraved; God’s saving grace either is, or is not, irresistible; and so on. The Bible does not support both sides of this controversy. If a person is asked “Are you a Calvinist or an Arminian?” he should state which he is, and give his reasons; or he might state that he has not yet studied the question sufficiently. But to evade the issue by saying “I am a Biblicist is both contemptible and foolish.

One of the great themes of Christian theology is the doctrine of the Person and natures of Christ. This involves the problem of the relation between the divine and the human in Christ. After profound Bible study and prolonged discussion, the Church answered this question at the Council of Chalcedon, A.D. 451. The substance of the decision is given in the Westminster Shorter Catechism, Q. 21 : “The only Redeemer of God’s elect is the Lord Jesus Christ, who, being the eternal Son of God, became man, and so was and continueth to be, God and man in two distinct natures, and one person, forever.” Here are set forth the elements of the doctrine of the Person of Christ: (1) Christ is truly God. (2) Christ is truly man. (3) Christ is only one (divine) Person. (4) Christ’s divine and human natures are distinct, not mixed or blended. (5) Christ will retain this unique constitution to all eternity.

Is this simple? No, it is rather complicated. Indeed, it is so complicated that modern “liberal” scholars with one voice insist that it cannot be true. They cannot admit anything so complex as two distinct natures united in a single Person. They are willing to call Christ “man” and “God” so long as the meaning and relation of these terms is left in total vagueness and ambiguity. But once formulate a definition in precise terms, and the “liberal” scholars begin raising objections to “theology” and “metaphysics.”