“What God begins, He ends. What He does, He does well,” said Rev. Jason Tuinstra. It was a fitting statement, and one that captured the essence of the Reformed Youth Services 2011 International Convention.

Convention week began on Monday, July 25, with the first of five main sessions. An exhortation to recognize our spiritual need for “construction,” or sanctification, fell on the ears of over 800 young people, chaperones, speakers, and staff gathered in the auditorium of Dordt College in Sioux Center, Iowa. All week long, those present were encouraged by the pastors’ passionate presentation on a myriad of topics related to the core theme.

Rev. Tuinstra was one of two keynote speakers from this year’s RYS Convention. Rev. Tuinstra, of Jenison, Michigan, and Rev. Bob VanManen, of Coopersville, Michigan, explored the convention theme “Under Construction” as based on Philippians 1:6, “ . . . being confident of this, that He who began a good work in you will carry it on to completion until the day of Christ Jesus.”

Breakout sessions, or workshops, were also conducted concerning various topics. Featuring twelve speakers (all but one were pastors) from various Reformed denominations across the U.S. and Canada, each workshop involved an hour-long, topical address. Subjects ranged from prayer to purity, from communication to contentment, and from boldness to spiritual battle. God was at work as many young saints grew in faith and knowledge through the workshops.

Each morning and evening, the youth had further opportunities for Bible study, prayer, and discussion. During “SON-set” meetings, each church youth group gathered together to speak about the day just passed, discuss workshops and main sessions, and to pray. “SON-rise” groups met every morning and consisted of either all ladies or all men. “SON-rise” was an excellent chance to have additional conversation regarding the previous day’s message and a variety of other matters.

The conference schedule allowed for several hours of free time every day, and despite the high heat, the campus was alive with outdoor and indoor activities. Soccer, volleyball, and basketball tournaments were held, along with other, non-athletic events such as a scavenger hunt, Bible Jeopardy, bowling, and swimming at the college pool. A wide variety of skills and gifts was on display during a talent show one evening. A performance by the Convention Choir followed the talent show, featuring the choral number “No More Night.”

Midweek, the conventioneers boarded buses bound for “Wild Water West,” a water/sports park located in Sioux Falls, South Dakota, fifty-five miles from Dordt College. Everyone traveled safely to and from the “Day Away” and enjoyed a time of fun and fellowship. Park activities included mini golf, bumper boats, go-carts, water slides, a lazy river, and a wave pool.

On Friday, the convention’s atmosphere was marked with an air of sadness, as old and new friends alike parted ways after only a few short days of fellowshiping with one another. The communion of saints, present wherever God’s people gather, was an unmistakable blessing to the RYS Convention attendees. Beyond the pleasure of this earthly companionship was the joy of worshiping God, learning, growing, and being sanctified by Him as individuals and as a body of believers. A prayer that all present might have “ . . . not only a burden to be challenged, but a longing to be changed,” concluded the final session of the RYS 2011 International Convention, and reminded all of their great and pervasive need for construction by the Master Architect. 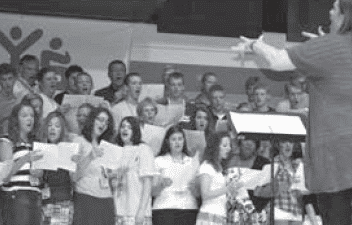 Mary Karsten is a home-schooled high school senior living in Waupun, Wisconsin. She is a member of Grace United Reformed Church in Waupun.