They gave Him vinegar to drink mingled with gall: and when He tasted thereof, He would not drink. (Matthew 27:34)

The Romans wanted criminals to be punished in a spectacular way in order to put fear into the hearts of men. Fear, they thought would be a deterrent to crime. No doubt they were right. Anyone witnessing the horror of a crucifixion would do anything and everything to avoid it.

The preparations for this particular crucifixion had been hastily made. It was, after all, the day of preparation for the Passover. The Sabbath would soon be here. Let us get it done with as quickly as possible. The three prisoners were about to be nailed to their crosses. But before they did, the criminals were offered something to drink. An odd drink to be sure; a drink that Jesus refused to accept.

A Cup of Kindness

It was customary in those days before the body was nailed to the beams of the cross to give the victim a drink which Matthew describes as wine mixed with gall. Gall simply refers to something bitter. The Gospel of Mark points out the drink was wine mingled with myrrh.

Myrrh was a very expensive, very precious commodity. Of all places for it to show up, it is here, just before the crucifixion of Jesus. According to Jewish tradition, myrrh was furnished by the women of Jerusalem who provided it and gave it to the soldiers that they might give it to the victims before the spikes were hammered into their flesh.

The addition of the myrrh to the wine would give it a peculiar taste. Some commentaries contend that this bitter and unpleasant tasting drink was offered to the condemned prisoners to add insult to injury. They were given this drink to humiliate them even further and to show them that even in the time of death, they were not worthy of a decent drink.

But there was another reason why this drink was given. This odd mixture was really a mild drug. It was given to the condemned men before their crucifixion in order to somewhat deaden the pain and stupefy their senses. On the part of the women that provided it, it was an act of mercy. They wished to ease the pain and make the suffering more endurable for those about to die.

The soldiers did not provide this drink, although they, no doubt, appreciated it. After all, it had to make their task a little easier to have the criminals somewhat drugged before hammering the spikes into their hands and feet. The scribes and the Pharisees would not offer such a mixture to the perishing. They were not likely to be so kind. They has worked so hard to put Him on the cross in the first place. They wanted their victim to suffer.

It was the women of Jerusalem who offered the victims this drink out of the tenderness of their hearts. They took pity upon these poor suffering men and they would do what they could to soothe their pain and strengthen their nerves for the ordeal through which they were obliged to pass. Whether this custom was followed in every crucifixion we do not know. Whether it was offered to the criminals that were crucified with Jesus we do not know. Very likely it was.

Some believe that this mixture would render the criminals unconscious. If it did produce unconsciousness, it certainly did not continue long because shortly after the thieves are nailed to the cross they join in with the crowd to hurl their insults to Jesus. Very likely it was not intended to produce unconsciousness. It was an anesthetic, but a very mild one similar to the morphine one receives in the hospital today. The intent was to blunt the senses and somewhat lessen the pain. Before Jesus was nailed to the cross, He was offered this mixture of wine and myrrh. No doubt, at first He accepted it gladly. His lips were dry. The fact that He took the cup and put it to His lips shows us that He was eager for a drink of something that would refresh Him.

He lifted His lips to the cup with eagerness. He wanted to drink from this cup but when He tasted it, He laid it down and refused to drink. He refused it even though He knew that the next few moments—indeed, the next several hours—would mean excruciating pain and unbearable torture. No matter what the pain may be; no matter how intense His thirst may be, Jesus resolutely and heroically sends this cup away.

A Cup of Temptation

We must understand that the offer of this cup came to Jesus as a temptation and thereby instead of easing His suffering, in reality, it increased it. Although it was provided by the tender women of Jerusalem, it was actually offered to Jesus by the evil one.

Some have suggested that possibly Jesus did not like the bitter taste and because of that there was no inclination on His part to drink. If that were true then it really would not have been a temptation. But it was. Almost any drink would have been welcome at such a time.

Jesus was burning with thirst. He had stood for long hours before His judges. He had been scourged. A crown of thorns had been pressed upon His brow. He had been abused and mistreated, struck in the face and cruelly mocked. After that, He had walked the mile from the scene of the trial to the place of execution. Part of the way the weight of the beams of the cross were upon His shoulders.

And now hours of torture awaited Him. Soon, He would feel the sharp pangs of the nails pierce His hands and His feet. His garments would be stripped from Him and He, the Son of God, would hang naked on the cross exposed to the morbid gaze and taunts of the crowd.

One could hardly have blamed Him if He had taken the stupefying drink. For such an ordeal we certainly would have chosen unconsciousness or at least semi-consciousness. It would have been so much easier to bear. But our Savior refused to drink the drug-filled, mind-numbing drink. 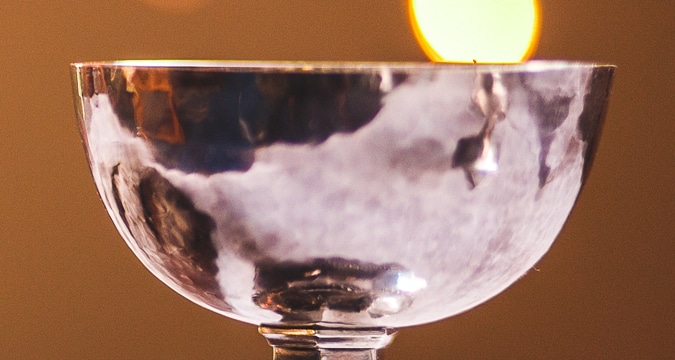 He rejected the cup of the devil because He wanted to drink instead the cup that His Father had given Him to drink. He had prayed earlier that the cup that the Father had poured for Him could be removed from Him. That cup He did not want to drink. But drink from that cup He must, for it was the Father’s will that He should suffer. “But the Lord was pleased to crush Him, putting Him to grief” (Isaiah 53:10).

Jesus had to suffer and die in full consciousness with an unclouded intellect. He needed to bring a willing sacrifice in obedience to the Father. Jesus had come to save sinners, but He cannot save them unless He experienced the full terrors of death and hell for them, bearing fully the wrath of God upon that sin. Jesus wanted to drink every bitter drop in the cup of woe that sin had brought upon the human race. He wanted to empty that cup so that there would be nothing left for His people to drink—nothing left for His chosen people to have to face.

The people whom Christ came to save must be set free—entirely free. No punishment must remain upon us. Our debt had to be paid in full. Know this to be true: there were no unnecessary drops in the cup of Christ’s suffering. But all that there was, every drop in that cup of suffering, Jesus was going to drink. He did not want to drink one drop less than that which His Father willed. He did not escape any of the suffering that would have fallen upon us. He drank all that was necessary to pay the awful debt of sin and satisfy the righteousness of God.

The Cup of Death

There will be no wine mixed with myrrh in hell. There is nothing there to mitigate or moderate the pain and the torment of the reprobate. There is nothing you will be able to do in order to diminish your anguish. The rich man in the parable cried out for a little water with which to cool his tongue, but it was refused.

There are no sedatives, no narcotics in the place of the doomed. No one there will be able to bury his troubles in liquor. They will have to endure the pains and the terrors of hell without comfort or relief.

Their minds will be clear, their consciences will be alert—alert enough to remind them of their rejection of the Christ who died on Calvary’s cross. The sinner will see with fearful clearness how he rebelled against the Maker and trampled underfoot the cross of the Redeemer.

From such a horrible end our loving Savior has saved us. He died the second death for us. He entered the lake of fire as all the billows and waves of God’s wrath rolled over His being. He experienced all the terrors of death and hell. With full consciousness and unclouded intellect, with a clear perception of the justice of God and the righteousness of the Law, with steadfast and devoted love to those whom He came to save, Jesus went to the cross. Jesus paid the price in full for the sins of His people.

It is well for us to remember the price our dear Savior paid for our redemption. He gave Himself for us. His great love made Him refuse the cup of temptation so that He could drink the cup of His Father and empty it down to its very last dregs so that there would be nothing left for us but the cup of joy.