Herman Dooyeweerd, Dr. jur., Pro­fessor of Law at the Free University of Amsterdam, has accepted the invi­tation of the Reformed Fellowship to lecture in this country. Professor Dooyeweerd is to be on this conti­nent from June 1 to November 1 of this year. The Reformed Fellowship, publishers of TORCH AND TRUMPET, are grateful for the honor of present­ ing this distinguished Dutch scholar.

The guest lecturer is to appear first at the Christian Reformed Ministers’ Institute in Grand Rapids in the first week of June. He is scheduled for three lectures there. Arrangements are being made with the authorities at Calvin College and Seminary for lectures before faculty and students in the early fall. Appearances are also being scheduled at Westminster Theo­logical Seminary and at various uni­versities in the United States and Can­ada. A limited number of popular lectures will no doubt also be in­cluded at various points in the United States and Canada. 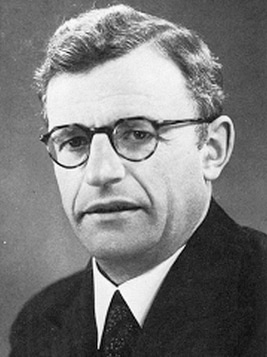 Professor Dooyeweerd received his doctorate at the Free University in 1917. His thesis was on the subject The Cabinet in Dutch Constitutional Law. In 1926 he was appointed Pro­fessor of Law at his alma mater.

He was made a Fellow of the Royal Dutch Academy of Sciences and Hu­manities in 1948 and since 1950 has been secretary of the section Humanities. He is Vice President Curator of the International Institute of Social Studies in The Hague. He is Presi­dent of the Dutch Association of Phi­losophy of Law, and is founder of the stimulating political review Anti­ revolutionaire Staatkunde. As dele­gate for the Dutch government he has attended many international con­gresses of criminal law, criminology and history.

A New School of Thought

Dooyeweerd is founder of a new movement of thought in Christian philosophy. In this development he has been closely associated with his colleague at the Free University, Pro­fessor D. H. Th. Vollenhoven. This movement has broken with all forms of Scholasticism and requires a sharp distinction between Christian philos­ophy and dogmatic theology. This philosophy begins with a radical crit­icism of theoretical thought in order to lay bare the necessary presupposi­tions of any philosophical effort. These underlying ideas reveal them­ selves to be rooted in a religious start­ing point, a basic religious motif.

Dooyeweerd shows that Western thought in its development from the Greek heritage to contemporary phi­losophy has been dominated by four different basic ideas or motifs of a central religious character. The radi­cal Christian commitment involved in the Christian religion demands an in­ner reformation of philosophical thought. Dooyeweerd contends that the Christian philosophical adventure has been impeded by various unwar­ranted accommodations to philosoph­ical views which have been domi­nated by religious motifs alien to the Christian faith.

This new movement is attracting increasing attention in Europe. It is a noteworthy distinction that five chairs have been established in lead­ ing universities in The Netherlands for the teaching of this new approach. Dooyeweerd has lectured in Belgium, France (the Sorbonne) and South Africa, and in other points in Europe. His views are championed by Profes­sor H. Evan Runner at Calvin College in the U.S.A. These views have re­ceived sympathetic attention in Ro­ man Catholic scholarly circles at well.

Dooyeweerd is editor-in-chief of the philosophical journal Philosophia Re­formata, organ of this new movement.

The character of this movement in Christian philosophy is indicated in the following concluding quotation from the foreword to the first edition of Dooyeweerd’s first major work, the three-volume De Wijsbegeerte der Wetsidee: “As a matter of fact the precarious and changing opinion of our fellow-men is not even compar­able with the inner happiness and peace that accompanies scientific la­bour when it is based upon Christ, Who is the Way, the Truth and the Life!”