Happy New Year! Great words—another year past and another day closer to the Day when the Lord will descend with glory. Yet events of the day do not always make us feel so happy. Muslim legalism and the terrorist threat on the one side, post-modernistic relativism and the slavery of ignorance on the other, along with the storm clouds of economic gloom seem more than just threatening. Christ said the gates of Hades will not prevail against the church (Matt. 16:18). Yet it is easy to become unsettled. What will the year bring?

Psalm 2 gives us Words of confidence for the coming year and the coming Day! Through the inspired poet’s words we get a glimpse into the courts of the worldly kings. The royal courts of these enemy kings and nations are the places of scheming rage and commotion. The nations are worked up for they must acknowledge God. They are upset because they refuse to acknowledge God. They set themselves up against the Anointed One.

Looking in at the scene the church sings, “Wherefore do the nations rage?” What are these enemy kings thinking? They will defeat our God? Don’t they know what God has done to a faithless Pharaoh and his armies? King Saul raged against God’s anointed David to no avail. When God chose Solomon, Absalom and Sheba raged against God and tried to take over the kingdom and met failure. Why do they plot futility?

We know that our King is God’s King, and He will defeat all the enemies. So why do they bother? They cannot escape the power of God. Even as they confederate together against the one God they are no match for His power. They tried with their tower of Babel too and the LORD divided them!

The church sings of her confidence in God and His Anointed, the Messiah or the Christ. Christ must reign until all enemies have been placed under His feet (I Cor. 15:25). In Rev. 12:1–5 we read of the woman who gives birth to the child who was to rule the nations with a rod of iron. The red dragon seeks to devour the child but the child ascends to heaven and the church is given a place of safety. Even Satan cannot halt the domination of the Almighty! 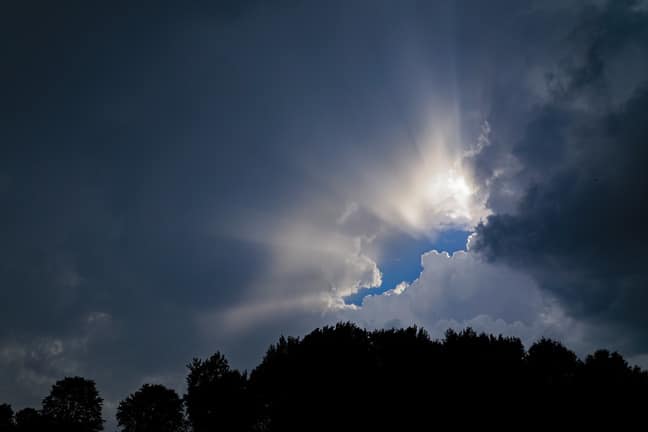 The Pharisees and Sadducees plotted in vain when they put the Christ to death. Our Father was victorious and Christ won the victory. As Hades rages and the enemies of the cross seek our destruction, they, too, plot in vain. Though the U. S. and Canadian governments and public education systems do all they can to stop even the mention of God,His Son, and the Word, theirs is an exercise in futility. They cannot stop God. They cannot defeat him.

See heaven! Far from earth’s commotion it is the place of a confident peace! God sits in the heavens and He laughs (verse 4). God will further increase the agitation of the nations. When he speaks they will listen and they will be afraid. They will be further agitated and terrified of the Most High! God speaks and He says, “I have installed my king on the holy mountain of Zion.” The created son of God, Adam, failed. The only begotten Son of God has been given dominion over the earth forever!

In the courtroom of God the Anointed speaks. The Anointed tells all through this song of the church that He is the Son of God. God has said to Him, “You are my Son today I have begotten you.” He directs our attention to His Father who is in heaven. He tells the world that now all power has been given to Him even before He came to earth. He will rule and He does rule with an iron rod with might and judgment. He speaks in terms of the covenant made to David recorded in II Sam 7 where obedience to the Father would ensure a successful reign for David’s son. And so Christ prayed in John 17:5, “Not my will but yours be done.” Executing His Father’s will by dying on the cross He took on the forces of darkness and drove them away. Christ tells how the Father has promised to give Him the nations of the earth for an inheritance. Now, Christ has all the nations in His hand. He has ascended to the right hand of the Father. His Kingdom shall never end. Who will oppose Him? Like a child smashing a vase made of clay to pieces so Christ can do to all the nations. No one can withstand His power! It is the year of our Lord 2003! Be of good cheer!

One more time in Psalm 2, the scene changes and we see that God from His court speaks to the kings of the earth. “Be wise,” He says, “O Kings, be instructed. You judges serve the Lord with fear and rejoice with trembling.” Here God, by our singing, speaks to the wicked kings and nations. So we with Psalm 2 sing to the nations, “Wizen up! Look around you! There is no hope for your plans so bend the knee and listen now. Be instructed. Kiss the Son, (that is to show honor to Him) and there will still be hope for you. If you seek to please God and escape the horrible judgment then you must worship the Son.” Christ said in John 5:23b, “He who does not honor the Son does not honor the Father, who sent him.” Paul wrote, “Therefore God exalted him to the highest place and gave him the name that is above every name, that at the name of Jesus every knee should bow, in heaven and on earth and under the earth, and every tongue confess that Jesus Christ is Lord, to the glory of God the Father” (Phil. 2:9–11).

So Psalm 2 sings of assurance but we also sing a warning to the world for God’s glory. Woe to the man, a king or not, who rejects the Anointed! He will be destroyed. And this happens when his wrath is kindled only a little. Imagine the horror for the one who will have to confront the full brunt of His fury! It is our calling to warn them and call them into our confidence! Psalm 2 helps us to do that. And Psalm 2 reminds us that we can move into the battle knowing that our King will not be defeated and so we shall be more than conquerors!

Happy New Year! Blessed are they who put their trust in Him! The world needs to hear that they have no hope if they would oppose our God and His Son. There is only one safe place and that is in the arms of our Father who has saved us through the Son’s death on the cross. He is the risen and Ascended Lord. The nations will fail but God will not. Adam failed, Jesus Christ did not.

Let us finish now with Matthew 28:18–20, Then Jesus came to them and said, “All authority in heaven and on earth has been given to me. Therefore go and make disciples of all nations, baptizing them in the name of the Father and of the Son and of the Holy Spirit,and teaching them to obey everything I have commanded you. And surely I am with you always, to the very end of the age.”

May God prosper us all for His Kingdom in 2003! Trust and be confident. Happy New Year – He’s coming soon!

Rev. Al Bezuyen is the pastor of the Trinity Orthodox Reformed Church in St. Catharines, Ontario.