The sudden death of Dr. Klaas Schilder may not pass by unnoticed by the Reformed communities throughout the world. Although he worked most intensively within the frontiers of the Netherlands, his influence as a penetrating student of the Word of God was and is felt wherever men and women love the Reformed faith. Within the constellation of leaders and thinkers in Reformed communities he was a star of first magnitude. With his closest associates we mourn his passing. We lose in him a Christian scholar of rare ability. 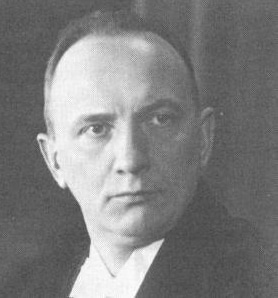 Klaas Schilder firs t greeted life on December 19, 1890 in the city of Kampen, Netherlands. When Schilder was six years old his father died. Poverty and “Moeder” Schilder’s family lived together. As young Klaas grew in physical stature, it appeared as if his career was destined to be “loopjonge,” errand boy, for a manufacturer in the city of Kampen. But “Ma” Schilder sensed the talents of her boy, and early instilled a love of learning.

In 1903 he entered the “Gereformeerde Gymnasium” of Kampen. In the Dutch educational system such a school involves a six year course somewhere between our High School and College. Here he became master particularly of Latin and Greek.

Some three and a half years after graduation from the “gymnasium,” on January 23, 1914, Schilder graduated with honor from the theological school of the Gereformeerde Kerken in Kampen. During the years from 1914 to 1933 he served six different congregations. As an under-shepherd of Christ he was deeply loved by his people. During his last charge, the consistory of Rotterdam-Delfshaven gave Schilder the opportunity to obtain his degree of Doctor of Philosophy. This degree he received from the University of Erlangen, Germany, summa cum laude. Not long after his denomination called him to succeed Professor Dr. A. G. Honig as the occupant of the chair of Dogmatic Theology.

His career as Professor was not easy. During the occupation of the Netherlands, Dr. Schilder had to “go underground.” His vigorous resistance to the Nazi occupation necessitated constant movement from house to house and friend to friend. Despite the pressure of pursuit by those who sought to imprison him, he wrote much, worked hard, and prayed fervently for his students. It was during his “onderduik” that difficulties in the church finally came to a climax. After much Synodical action, he was suspended and finally deposed on August 3, 1944. Eight days later some 1100 people heard the reading of a paper known as “The Act of Liberation or Return.” On that date the Vrijgemaakten, the Liberated Church was born. Today it is known as the “Gereformeerde Kerken Onderhoudende Article 31 Kerken Orde.” (It is not the purpose of this sketch to pass judgment on either the Theological or Church Political aspects of this problem. Those interested, and who can read Dutch, are pointed to a book of Dr. C. Veenhof entitled Unica Catholica which gives the story from the viewpoint of the Liberated.) Finally, having been urged by his physician to take rest, the energetic Schilder suddenly died at his home on Sunday, March 23, 1952 at the age of sixty-one. In the midst of much seemingly unfinished business, Schilder’s Savior called him home to the Sabbath rest reserved for the people of God.

Schilder as Student of the Word

Of all the things that can be said for Klaas Schilder, this must be said: he opened the Scriptures for the people of God. In the English speaking world he is best known for his famous trilogy dealing with the sufferings of Christ, translated by Dr. H. Zylstra. Throughout all three volumes one is astonished at the Biblical interrelationships which he brings to bear upon the various aspects of our Lord’s humiliation. Christ greets the child of God on every page of Scripture. This Schilder knew and conveyed to his readers. For this we remain indebted to Schilder, the student of the Word of God.

The same is true of his sermons. In the volume entitled Om Woard en Kerk one sees Schilder the preacher. The first 126 pages contain eight sermons of an unusually instructive and inspiring character. In fact both volumes of the work contain rare insights into God’s infallible Word. It has been said that Schilder was speculative in his exegetical labors. It is true that one might not always agree with his exegesis. But rather than speaking of a speculative tendency, we might speak of a poetic ectasy which at times appears to have carried Schilder beyond the limits of sober exegesis. He had a poet’s soul. Though the reader may not want to go all the way in accepting Schilder’s conclusions at the end of his flights of exegesis, it can not be denied that the reader is a better student of the Word for traveling with this scholar on his journey through the Word. All his books, sermons and articles reveal Schilder as a disciple willing to sit at the feet of our Great Teacher, Jesus Christ.

Schilder and the Justice of God

God’s grace made Schilder deeply conscious of the inviolate honor of the Sovereign God. In his trilogy above referred to, as well as in his unfinished theological symphony on the Heidelberg Catechism, Schilder points us to the majesty of Divine Law and the inexorable rigor of Divine Justice. God must be vindicated! And in this vindication of God’s justice by Divine Love we discover the fusion of Justice and Love so dear to the soul of every Reformed believer. Schilder was Reformed, precisely because he saturated himself in the Word and world revelation of the Sovereign God. As a true servant of God he led the people of God into the presence of God.

Schilder and the Covenant and the Church

Schilder wrote much concerning both the church and the covenant. This was to be expected. One can not write about the one without involving himself in the other. It is this area of writing, speaking’, and preaching which aroused much of the “storm” in the Netherlands. Those who have tried to live in the stream of Reformed learning and life flowing from the Netherlands will not soon forget the reaction of the late Professor Valentine Hepp and others in Dreigende Deformatie to Schilder’s conceptions of the church’s unity and pluriformity. Regardless of what one’s final judgment concerning Schilder’s contributions on this score may be, it is necessary in the interest of love for the people and the church of God to read and study and evaluate in the light of God’s Word what Schilder has written on the subjects of church and covenant. Irrational prejudices based on biased information can leave this area of Schilder’s thought lie fruitlessly fallow. Those who love the truth and the church of Christ may not so live and evaluate.

Schilder and a Philosophy of History

It cannot be denied that the common grace doctrine is important. Christian Reformed Church history around 1924 still witnesses to this fact. Schilder was not silent on this matter. He could not be since his work on Wat is De Hemel gives us a philosophy of history. Paradise lost and Paradise regained are related by the dynamic movements of Divine Providence within which are our genuinely human responsible relations. Here too Schilder has spoken. Here again the vital interest of the Reformed community in tile truth of God compels us to pay attention and evaluate soberly in the light of God’s revelation.

Schilder did much. He did much that was right and no doubt some that was wrong. He too was a sinner saved by grace. And his sanctification wasn’t completed until the Lord finished the work begun in his soul at his death on March 23, 1952. But the glory of the work of the ascended Christ is precisely this! H e employs saved sinners to carryon the victorious work of his Kingdom and his Church. Christ, we believe, used Schilder. May we who claim to love the Reformed faith be given grace to study and understand something of the contributions which the controversial figure of Dr. Klaas Schilder made to the universal Reformed community.

In a recent issue of De Reformatie, a weekly periodical which Schilder served since 1935 as editor-in-chief, we find a list of Schilder’s published writings. This list includes his outstanding sermons, brochures, lectures and books. The volume of work performed by this gifted brother becomes even more impressive when one considers that this list is not claimed to be complete, and that these works do not include many of his regular contributions to such magazines as De Bazuin, Geref. Theol. Tijdschrift, Kentering, Opgang, Eltheto, Op den Uitkijk, etc. in addition to his own De Reformatie. Here is the list: