In Acts 2:23,24 we have a statement of the fact of the resurrection, the anchor of our faith: “This man was handed over to you by God’s set purpose and foreknowledge; and you, with the help of wicked men, put him to death by nailing him to the cross. But God raised him from the dead, freeing him from the agony of death, because it was impossible for death to keep its hold on him.” 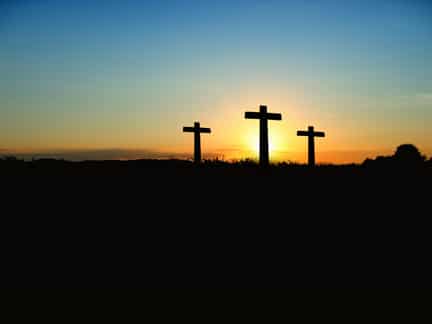 1. The historical fact: “Whom God raised up.”

2. The divine approval: “Freeing him from the agony of death.”

3. The perfect victory: “Because it was impossible for death to keep its hold on him.”

The Christian religion is built on a historical event. J. Gresham Machen said: “Christianity is not something that was invented, it was something that happened.” The resurrection of Christ is recorded in all four gospels. No one saw it happen. The writers of the gospels tell the effect of it. They don’t try to prove it. They just state what they saw and heard and what happened to them.

Listen to the account of St. John in John 20:1–9. Mary Magdalene carne before dawn and saw the stone rolled away. She jumped to the natural conclusion that the body was stolen. She ran to tell Peter and John. Peter and John both ran to the tomb. John describes the looking of Peter, John and Mary with three different Greek words: Mary saw (blepo)—a superficial looking on the outside, and she concluded Christ’s body was stolen. Peter saw (theoreo)—a close examination. He looked at all the details very carefully, analyzing everything he saw but withholding any judgment. John saw (eidon)—and believed. He understood and immediately came to the conviction that Jesus was alive.

On the first day of the week, He arose. God cut the cords of death and loosed Him from the snares of death. God did it! What does this mean? First, it means God’s approval of Christ’s work of atonement. Jesus had said: “Father into Your hand I commend my spirit.” Jesus laid His sacrifice before the Father’s throne. The Father accepted it and raised Him from the dead. Second, it means He was raised for our justification. His righteousness is ours by faith. Third, it means regeneration or new life. The good news of the gospel is that the power of God displayed on that first Easter will also be displayed in us, in our spiritual resurrection. Fourth, it means our sanctification. When God the Holy Spirit raises us up from the death of sin, He sets us on a new track, He gives us a new view of life, a new motive for living, a new direction and a new purpose. Colossians 3:1: “Since then you have been raised with Christ, set your hearts on things above…”

Christ conquered death. In Christ’s resurrection, death was put out of commission (Hebrews 2:14,15). Paul triumphantly sings in I Corinthians 15:54–56: “Death has been swallowed up in victory. Where, O death, is your victory? Where, O death, is your sting? The sting of death is sin, and the power of sin is the law. But thanks be to God! He gives us the victory through our Lord Jesus Christ.”

These great truths make it possible to preach.

The resurrection of Christ gives authority to preaching.

The resurrection of Christ gives power to preaching.

The resurrection of Christ gives confidence to preaching.

The resurrection of Christ gives urgency to preaching.

WOE IS ME IF I PREACH NOT THE GOSPEL!