Rob Bell is the pastor of one of the fastest growing churches in the history of America. The church is in Grandville, a suburb of Grand Rapids, MI. He recently published a book, Velvet Elvis, Repainting the Christian Faith. His title refers to an old painting in his basement of Elvis Presley. Bell maintains that this painting is not the ultimate work of art that makes all future works of art worthless or unnecessary. Art needs to continue. It needs to develop. In the same way, Rob Bell maintains that even though we have been given many different new paintings of Christianity throughout the centuries, we must continue to paint new pictures of the Christian faith. Velvet Elvis is Rob Bell’s attempt to repaint the Christian faith.

Rob Bell invites us to his “Velvet Elvis”, his repainting of the Christian faith with these words, “I am learning that my tradition includes the rabbis and reformers and revolutionaries and monks and nuns and pastors and writers and philosophers and artists and every person everywhere who has asked big questions of a big God.”1

Bell’s attempt at repainting the Christian faith is part of a larger picture. Ron Gleason articulates this in three articles in Christian Renewal.2 He introduces us to the key players in a movement called the “Emergent Church Movement”.

Rob Bell is specifically mentioned as a member of this group. Gleason quotes a summary of the broad characteristics of the group articulated by Os Guinness in Prophetic Untimeliness, “The ‘coming church’ and the ‘emerging church’ are everything. The talk is all of new ways of ‘doing church’ through reinventing, revising, innovating, borrowing, mixing, and experimenting. …Ministers are no longer theological authorities but the ‘chief storytellers’ and facilitators of a new joint spiritual journey’.”3 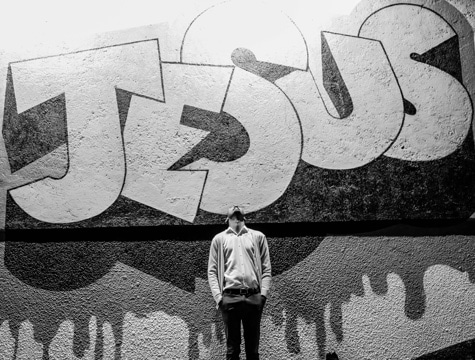 Not everyone will recognize this fact. Sadly, some will view his repainting of error as a great work. They will look at the title, look at the claims that this is a Christian book and then conclude it must be right. They will be wrong. Just because Rob Bell uses brush strokes of Biblical language does not make his painting Christian truth. He uses the language of the Christian faith but he paints a different picture. He repaints error rather than truth.

The Repainting of the Christian Faith presents a philosophy of human existence that is inconsistent with the truth revealed in God’s Word. There are many pieces of the picture Rob Bell paints that can be looked at. It is important to examine the arms, legs, and other aspects of his repainting. However, I will begin by trying to step back and see the big picture he tries to paint.

According to Mr. Bell there are two ways to approach doctrine: as a brick or a spring.4 The brick approach to doctrine is solid, unmoving and unchanging. It has no life. It is the wrong approach. A spring has life; it is flexible, and it is constantly changing. Rob Bell believes all doctrines are springs. By embracing such a view of doctrine and truth Mr. Bell drives a wedge between reality and doctrinal truth. He creates a paradox where there isn’t one. Bell views doctrines as “statements about our faith that help give words to the depth that we are experiencing.”5 He makes a false distinction between the experience of our faith and the truth. The subjective trumps the objective. Experience is the reality. Words are incapable of conveying absolute truth. There is absolute reality in experience but no absolute reality in words. There is no concept in Rob Bell’s teaching that part of the experience of God is knowing, by faith, truth about God and His works revealed in the words of Scripture. He writes, “Our words aren’t absolutes. Only God is absolute, and God has no intention of sharing this absoluteness with anything, especially words people have come up with to talk about him.”6 These themes of Rob Bell sound like the anti-Christian philosophical god of Hegel, “The Absolute is infinite life, and love is the consciousness of the unity of this life, of unity with the infinite life itself and of unity with other men through this life.”7

Rob Bell’s repainting of false teaching looks like a merger of the dialectic philosophy of Hegel, the liberalism of Rudolph Bultmann and the neo-orthodoxy of Karl Barth. Rob Bell has embraced these and other errors and merged them into postmodernism, an anti-Christian philosophy teaching the impossibility of absolute truth. Both post-modern 21st century philosophy and 20th century “modern liberalism” have influenced Rob Bell. A more appropriate title for Rob Bell’s painting, his “Velvet Elvis”, is “Postmodern Liberalism”. Rob Bell accomplishes what he sets out to do. His painting includes “every person everywhere who has asked big questions of a big God”8 even when their answers deny the truths of the Bible.

The false teaching that the Christian faith needs to be repainted for every culture has a long history. Sadly, these historic attacks on Christian truth are alive and well. Hegel replaced the Christian faith with declarations about a thesis always having an antithesis that results in a synthesis that becomes the new thesis in a never-ending quest for truth. Truth is redefined as the never-ending quest itself. There is no absolute truth. Truth is a constant experience of paradox. Every time you think you have truth, its opposite enters into your experience of reality.

Rob Bell repaints this error. There are no absolute answers to our questions. Doctrines are springs that must be flexible, for the answers to our doctrinal questions only produce more questions, whether about God’s love or the Trinity. “An answer… raises even deeper questions. …Truth always leads to more…truth. Because truth is insight into God and God is infinite and God has no boundaries or edges. So truth always has layers and depth and texture. …It’s like a pool that you dive into…no matter how hard and fast you swim downward the pool keeps getting…deeper. The bottom will always be out of reach.”9 He writes, “The very nature of orthodox Christian faith is that we never come to the end. It begs for more. More discussion, more inquiry, more debate, more questions”10 (Rob Bell often breaks grammatical rules to emphasize his point that there are no absolutes). In language close to Hegel’s anti-Christian philosophy of truth, Rob Bell writes, “It’s not so much that the Christian faith has a lot of paradoxes. It’s that it is a lot paradoxes (sic). And we cannot resolve a paradox. We have to let it be what it is.” 11

He equates this view of truth with the word “reformed”. He claims the Reformers of Luther’s day knew that what they “did and wrote and decided would need to be revisited. Rethought. Reworked. …By this I do not mean cosmetic, superficial changes like better lights and music… I mean theology: the beliefs about God, Jesus, the Bible, salvation, the future (sic). We must keep reforming the way the Christian faith is defined, lived and explained.”12

This analysis of the Reformation is historical revisionism and denies Biblical truth. First, the reformers did believe the church would always be reforming, but not as defined by Rob Bell. True, the church failed to be perfect, but there was a perfect standard to be measured against. There was truth really discovered. The Reformers never thought that every Biblical-theological doctrine they wrote and decided needed to be reformed, changed and explained. Confessional statements arising out of the Reformation were declarations of truth. The possibility of error always exists. But absolute error exists just as absolute truth.

Second, instead of doctrine needing to be reformed by living, Protestants believed our living needed to be reformed according to doctrine. There is absolute truth about God found in the Bible: truth about how we should live and about the reality in which we exist. Human living is what is fallible and unreliable. Mr. Bell turns this upside down. Living is what is real and true. Words are just attempts to verbalize the truth in which we live.

Third, Rob Bell misuses the word reform. He believes it means new. But, God forms the church and the form is given in His word. The historical church continues to fail to live up to this perfect standard of truth of what the church should be. So, because we have failed to be what God reveals in His Word, the church and individuals must be reformed into the mold God gives us in the New Testament. But this is not the goal of Rob Bell; he writes, “The goal is not to be a ‘New Testament church’. That makes the New Testament church the authority. The authority is God who is acting in and through those people at that time and now these people at this time. The point is to ask, what is God up to here, now?”13 For Bell there is no absolute word from God about “now”. New truth must be discovered. Through living we discover the truth for today that will change for tomorrow.

Rob Bell describes all people or groups that claim to have absolute truth as bricks. He judges that all such people are liars. However, the Bible makes that claim. Protestants make that claim. The historic Evangelical consensus of the 20th century made that claim. I make that claim. According to Rob Bell we are liars. We are bricks. Rob Bell’s strongest attacks and criticism are against movements, churches, people and pastors like myself who claim truth. Not because what we say may be wrong. That is not the problem. The problem is to claim truth. He writes, “It sounds nice to say, ‘I’m not giving you my opinion; I’m just telling you what it (the Bible) means. The problem is, it is not true. I’m actually giving you my opinion, my interpretation of what it really says. And the more I insist that I am giving you the objective truth of what it really says, the less objective I am actually being.”14 He condemns anyone who claims to have an absolute word from God on the matter of truth. Of course this is Rob Bell’s absolute word from God that all truth claims are just interpretations about truth. He then goes on to give Biblical example for his view.

He cites the Jerusalem council of Acts 15 as the Biblical basis for this view of truth. He claims they “don’t claim to have an absolute word from God on the matter.”15 Therefore, we should never claim to have absolute truth on the teaching of the Word of God. First, assuming there are some matters where we cannot claim absolute truth does not mean that we cannot claim absolute truth on any matter. Second, one wonders why Rob Bell even bothers to cite a Biblical example to tell us what is the truth of how to talk about the Bible, if the Bible is all just a personal interpretation. But to say you are doctrinally WRONG is wrong, except if it is Rob Bell condemning bricks for thinking they are right. He claims to know the truth about truth. But Rob Bell is wrong on the truth about truth. He is outside the orthodox Christian faith about truth. Thus, when he says he agrees with Christian truth, he means something vastly different from Protestants or Catholics or Presbyterians or Baptists. We have historically disagreed with one another but one thing we agree on is that there is truth.