It has often been observed that the dignity and splendor of original man can in part be discerned in the startling character of his ruin. Just as something of the grandeur that once belonged to ancient civilizations still is traceable in their desolate remains, so humankind, even in its fallen state, carries vestiges of its original greatness. For as we look at man today in all the magnitude of his daring endeavor, his disclaim of impossibilities, and his multi-fingered intellect probing a thousand depths and directions, we realize in some measure what man must have been, and, still more important, what he will be when his temple one day is wholly sanctified by the Divine Shekinah. Mark Twain, in Innocents Abroad, calls the ruins of Baalbek “a chaos of fallen splendor.” There is that about man, too. Even his evil passions testify to mis~ directed energies eloquent in their horrible perversions.

Great Man! the Scandal of the universe! There he stands with his vast treasures of scientific knowledge, with his accumulated wealth of fine arts, with his social progress and his material comforts. There he stands, unable to conceal the marks and defilements of his apostasy. He stands as a fallen creature. He stands in an abyss from which he is unable to extricate himself. With Rousseau he cries to God, “Why hast thou made me so weak?” The pretext avails nothing. for man’s conscience carries God’s answer, “I made thee too weak to rise from the pit, because I made thee strong enough not to fall therein.”

Verily it is so with all of us as we live in sin. No one is exempt. The same disharmony prevails in the same music of life. The same rift in every lute. The same stunting, the same thwarting. Like the fabled Sisyphus man always tumbles back when the top of the hill seems won. “Dim miniature of greatness absolute,” ever seeking to magnify the miniature, and never to be trusted with the magnification.

Man dares to talk about One World, United Nations, Peace on Earth—all to be achieved by himself. The painful irony in this false hope is that because man is united with fellow-man in sin, he is divided from him! And he remains so unless something is done about that sin. Is there hope for him? 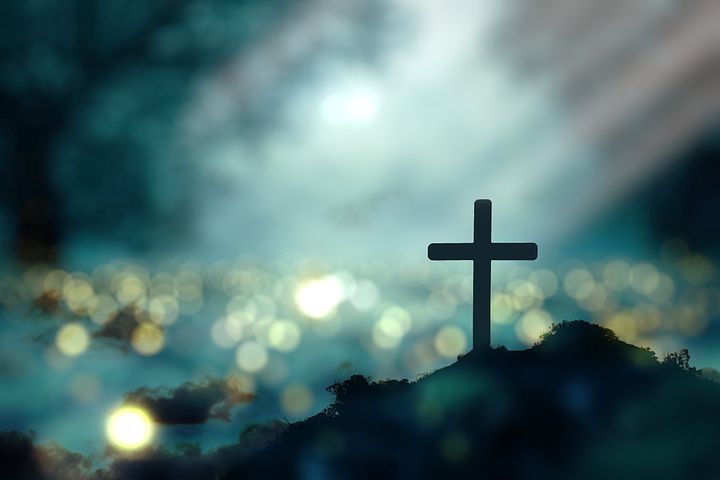 There is hope for him, but it lies not in him. Sin is our “No” to God, and history is the sphere in which we keep on saying it. But something else operates in that sphere. God’s “Yes” is there, too. Against man’s boastful, defiant, self-centered “I am” God has sent his “I am,” “I am the light of the world,” “I am the bread of life.” “I am the good shepherd.”

The good shepherd layeth down his life for the sheep. This is more than something to be believed. This is Someone to be believed! Christ is God’s answer to our ungodliness. God was in Christ reconciling the world unto himself. God gave-sent-his Son, not as an addition to our faith, but as the author of our faith. And as the finisher, too! Christ finishes what he commences. On the cross he cried, “It is finished,” and thereby announced that the sacrificial foundation of our salvation was laid and completed. Foundation is fIrst. Even by itself that foundation is amazing. Christ crucified is a library triumphant saints will be studying through all eternity. But there is more. The open, empty tomb also is revelation. The Passion becomes Power -the Lord ascends, is crowned, and now reigns. And as he reigns he gathers his people in. “Other sheep I have—them also I must bring.” And when all have been brought in, the end shall come.

That will be glory! Whatever of majesty there is in divine omnipotence, whatever of extent and resource in divine wisdom, whatever of munificence in eternal goodness, whatever of depth in the mercy that endureth forever, whatever of righteousness in the divine justice, whatever of absoluteness in God’s sovereignty, shall then be disclosed as it was never disclosed before. Every dark dispensation shall be covered with light. Every strange providence shall be seen in the perfect setting of unimpeachable purpose. Through the revolving ages of eternity creation shall unfold wonders that now are concealed by the hand of the Creator, and each unfolding shall be fraught with deep and impressive illustrations of bow God hath made all things for himself. And he who was numbered with the transgressors and bare the sin of many shall see of the travail of his soul, and shall be satisfied!