One of the trends among Christians today is a desire for only practical Bible messages. People do not want to hear about religious topics that are irrelevant to their faith-walk. In many ways this is an inappropriate demand since all true theology is practical (2 Tim. 3:15–16). But is worship one of those relevant topics?

Robert Rayburn concludes an excellent address on worship with this claim: “The faith of many today has been weakened because they do not know how to worship.” If he is right, then worship is an intensely practical topic. John Calvin would certainly agree. According to him, “The whole substance of Christianity [chiefly consists in] the mode in which God is duly worshipped.” That is to say, all of Christianity can be boiled down to proper worship. Calvin said that the goal of theology is worship (taken from the Old English word worth-ship), that is, to declare the worthiness of God.

Worship was of the highest importance to Calvin and the Protestant Reformers. In a sense, the Reformation itself is the impact that Calvin and others had on Christian worship. The Reformation was mainly liturgical. Even reforms in doctrine were intimately connected with the church’s worship. Speaking more specifically, Calvin’s impact here is his “middle way” between two extremes that existed in his day and that exist in ours, as well.

On the one extreme is what we might call “non-liturgical worship.” All too often, services today are, according to Rayburn, “a hodge-podge of elements put together in such a way that neither the minister conducting the service nor the congregation participating has any real sensitivity to proper movement in the worship.” If any concern is given to the relationship between the elements of the service it is on largely pragmatic grounds.

On the other extreme is what we might call, “excessively-liturgical worship.” In these churches the drama is in the ritual, not in the doctrine. Rites are performed that few people understand but that give the worshippers the false satisfaction of having “done church.”

Calvin’s position was a middle way. To him, worship was structured as well as spirit-dependent. It was reverent but not enigmatic. It was to be in Spirit and truth.

In highlighting the contributions of Calvin, we are not suggesting that our worship today must look exactly as it did in Geneva in the sixteenth century. But to suppose that we have nothing to learn from Calvin is to cut ourselves off from all of the benefits of historic Protestant worship. 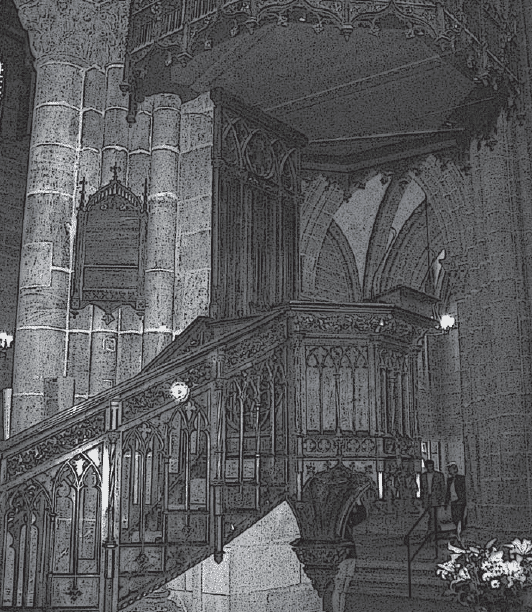 Three primary principles may be drawn from Calvin’s Commentary on John chapter four. This passage is an important starting point for Calvin on this topic. Here Jesus teaches the Samaritan woman the nature of true worship. The fulcrum of the discussion is Jesus’ claim that “True worshippers will worship the Father in spirit and truth” (John 4:23).

It may be that the following principles will seem rather ordinary to us. If so, we need to remember that in the eyes of the Catholic Church, Calvin was, and still is, a revolutionary. Calvin himself realized that these principles were considered radical. One of the most helpful of Calvin’s writings on worship is called “The Necessity of Reforming the Church.” In this treatise Calvin is responding to the allegation that his reforms of worship have “ . . . disturbed the church and in a manner convulsed the whole world.” If these principles seem commonplace today, that itself is a testimony to God’s enduring work through Calvin.

The most important principle of worship is that it finds its center in God. As Jesus said, true worshippers worship “the Father.” Right worship of God, said Calvin, is “to ascribe and render to Him the glory of all that is good, to seek all things in Him alone, and in every want have recourse to Him alone.” True worship is, in a manner of speaking, to have a “God-complex.”

This teaches us something very fundamental about our worship services. Again, in the words of Rayburn, “Good worship services are not for the enjoyment of the worshipers. They are to provide an opportunity for devout believers to offer the sovereign God of the universe that adoration, praise, honor, and submission of which He is worthy and to receive that spiritual food which He provides true worshipers only through the Word and the sacraments.” Worship is not for the people but for God. As soon as we forget this we are headed for trouble.

Are our services chiefly aimed at attracting people? Are we focused on having just the right instruments or just the right praise leader? We need to be careful that the direction of our worship does not start drooping horizontally.

True worship is biblically based

Calvin draws this principle from the second commandment. If the first specifies which God to worship, the second tells us how to worship that God; specifically not based on our imagination and creativity. “The law,” said Calvin, “is a bridle to prevent men from turning aside to spurious worship.”

He said, very simply, “piety . . . confines itself within due bounds.” That is, true worship of God abides by the standards of God himself. The standard of Scripture trumps pragmatic concerns. Calvin is very strong on this point: “Nothing is more wicked than to contrive various modes of worship without the authority of the Word of God.”

We should examine every part of our worship service in light of the Bible. Calvin warns against “attempting anything in religion at random” or based on good intentions.

Not only is worship regulated by God’s word, it is also expressed through the Word. Our worship services must breathe a spirit of Bible. The Word must be sung, prayed, preached and received via the sacraments. If a stranger were to walk into your service at any point would he soon realize that your worship is an expression of the word of God?

Jesus (in John 4:23) not only stresses that true worship is God-directed and Bible-based; it is also spiritual. I have combined spirituality with simplicity because, to Calvin, simplicity was essential for achieving the spiritual quality of worship. In other words, in advocating a spiritual simplicity Calvin opposed worship that is externally ceremonial.

What do we mean by that phrase? Calvin cites “incense, candles, holy garments, an altar, and [other assorted] vessels” as examples of the type of ceremonialism that is inappropriate in the gospel age. These ceremonies, while giving the appearance of spirituality, actually tend to obscure Christ.

Calvin acknowledged that, in the Old Testament, the godly did use many ceremonies, but explained that this was not fitting after the temple veil was rent and the temple ceremonies were fulfilled in Christ.

In our day, few Protestants would claim that these ceremonial accoutrements have any inherent spiritual significance. But what about their use as aids? Speaking frankly, Calvin found the argument to be quite lame. He wrote that God alone knows thoroughly what is good for us. He knows us better than we do, and He knows what is helpful for us. Imagine a child who uses chocolate syrup in the place of toothpaste and argues to his parent that it helps him get into the spirit of tooth brushing! This “aid” to tooth brushing is actually counterproductive, as any good parent would understand. God best knows how to “get us into the spirit of worship.”

Still, Calvin did not maintain that ceremonies were not permitted in Christian worship. There are a few, he said, that do not obscure Christ but rather illustrate him very well. Chief among these are the Lord’s Supper and baptism. These are the Spirit-given rites that truly aid the spiritual worshipper.

Calvin disdained external distractions because he wanted to get to the heart of worship. True worship is a simple fellowship between the believer and the triune God.

Some implications of these principles have been drawn out already, but we conclude by applying them to what is usually considered the core of worship, singing. Singing is an appropriate test case because, as Calvin said, “singing has great power to inflame men’s hearts to praise God with a burning zeal.”

Singing must be God-directed

Interestingly, for Calvin, singing is prayer; prayer plus tune and rhythm. Although there are horizontal implications for prayer (and singing), it is primarily a vertical exercise.

For all we hear about seeker-sensitive worship, John 4:23 teaches that God is the seeker of worship. This understanding changes the way we approach singing. Since our singing is to God, it matters little what others think of it. When we sing, we should be sensitive to his watchful eye.

The demand that worship be God-directed also means that every song we sing must lead directly to Christ. This does not mean that praise songs must avoid all personal references to the worshipper. But it must mean that the song clearly points to the redemption of God in Christ.

Singing must be spiritually simple

For Calvin, all worship is essentially spiritual. This means that singing must proceed from a sincere heart. In fact, Calvin argued that in true worship, the Spirit actually sings through us. Is this what your singing is like?

In terms of simplicity, worship songs should be accessible to all. This may mean explaining vocabulary in songs or explaining how they fit into the service. We should also be aware that certain songs are not meant for congregational singing but for professional performers and should be avoided in worship.

Singing must be governed by Scripture

One of the more controversial questions of church singing is, “What should we sing?” Calvin’s basic answer was: “The Bible, and primarily the Psalms.”

Calvin did not sing only Psalms. Singing of the Ten Commandments and of the Apostles’ Creed and Simeon’s Song (Nunc Dimittis) were regular parts of Calvin’s liturgy. He was convinced, however, in his words, that the inspired Psalms of David are the “best spurs to incite us to pray to God, to praise Him, and to meditate on His works in order to love, fear, honor, and glorify him.” Calvin’s famous claim that the Psalms are “an anatomy of all the parts of the soul” explains why in his opinion Psalm singing contributes to a balanced piety. Without being grounded in Psalms, worship is in danger of becoming one dimensional.

These are just a few of Calvin’s contributions to worship. The particular form that he advocated was not perfect, but we believe it was pointed in the right direction; it was governed by the right standard, and it flowed from a concern for spiritual sincerity.

Calvin was satisfied that change was justified so long as our goal is that “the one God may be worshipped amongst us, and that his simple truth may reign in our church.” What more worthy goal could be imagined? And, as has been suggested, if worship is the sum of religion, what could be more practical?

Rev. William Boekestein is the pastor of Covenant Reformed Church in Carbondale, PA