I would like to look with you at the event of Pentecost as an act of God, described for us in Acts 2. The third Person of the Holy Trinity was poured out upon the church. The church is not a rootless thing. It goes back to the Old Testament, in fact, it goes back to the Garden of Eden. In the work of the Holy Spirit we have what our Lord Jesus Christ continues to do and to teach after He ascended into heaven.

Pentecost is an act of power. God is acting again as He acted in crucial times of the Old Testament. “When the day of Pentecost came, they were all together in one place. Suddenly a sound like the blowing of a violent wind came from heaven and filled the whole house where they were sitting. They saw what seemed to be tongues of fire that separated and came to rest on each of them.” Here is power. God is at work. His work is accompanied by wind and fire. These two things accompanied God’s work before. As Israel left Egypt God led them with a pillar of cloud and fire, and the wind dried up the Red Sea. On Mt. Sinai, God came to Moses and Israel in a violent storm; smoke billowed up from it like smoke from a furnace and the whole mountain trembled violently. On Mt. Carmel, God answered the prophet Elijah’s prayer with fire on the altar and then the wind and the rain came in the storm to end the three-and-a-half-year draught. Now on Pentecost God is acting again.

“All of them were filled with the Holy Spirit and began to speak in other tongues as the Spirit enabled them.” The people from all the nations under heaven that came together could understand those filled with the Spirit. They spoke authentic languages they didn’t know before. This takes us back to Genesis 11 and the Tower of Babel where there was confusion of tongues. The division and confusion came because man was trying to build a tower to heaven. He wanted to get to heaven with his own effort. He was trying to build a kingdom for himself, with man at the center. God confused the tongues; the people were scattered so their wicked devices came to naught. But here at Pentecost is God’s act of restoration. It is a reversal of the Babel process. God repairs the divisions. Those filled with the Holy Spirit declared the mighty acts of God. In Babel the languages divided and confused the people. At Pentecost there was one message communicated in many tongues. The one message was the declaration of the wonders of the Lord, the work of our Lord Jesus Christ. It is the blood of Christ that breaks down the dividing walls (Ephesians 2:14). Through the cross of Christ there is reconciliation with God and with one another. The races must meet at the cross. After Pentecost Philip went to Samaria and to the Ethiopian eunuch. Peter went to Cornelius. The church at Antioch, a Greek city, sent out the first missionaries. Paul went to Europe. All the racial barriers began to crumble.

Some in the crowd that came together made fun of those filled with the Spirit and said: “They have had too much wine.” Then Peter stood up with the Eleven, raised his voice and addressed the crowd: “Fellow Jews and all of you who are in Jerusalem, let me explain this to you; listen carefully to what I say. These men are not drunk, as you suppose. It’s only nine in the morning. No; this is what was spoken by the prophet Joel.” Then follows the quotation from Joel 2:28–32. The Old Testament was preparing for this event. God declared: “I will pour out my Spirit on all people. Your sons and daughters will prophesy.” Pentecost is an act of fulfillment. God had given insight into His whole plan of salvation to the prophets so that the people would recognize it when it came. Now the last days have arrived. All the promises of God find their “Yes” in Christ. Through Him the “Amen” is spoken by us to the glory of God (II Corinthians 1:20). 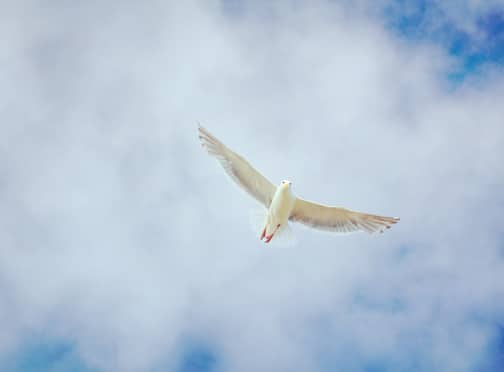 In Acts 2:22–36, Peter recounts the events of Christ’s crucifixion and resurrection. These historical facts comprise the foundation of Pentecost. They are the mighty acts of God about Jesus of Nazareth, a man accredited by God. “This man was handed over to you by God’s set purpose and foreknowledge, and you, with help of wicked men, put Him to death by nailing Him to the cross. But God raised Him from the dead, freeing Him from the agony of death, because it was impossible for death to keep its hold on Him…God has raised this Jesus to life…exalted Him to the right hand of God. He has received from the Father the promised Holy Spirit and has poured out what you now see and hear.” The conclusion is: “God has made this Jesus, whom you crucified, both Lord and Christ.” All of this came together on Pentecost. The whole of history had been moving toward the crucifixion of Jesus and His exaltation to be Lord and Christ. Now on Pentecost Christ pours out His Spirit for the empowerment of the church. Let us all be assured of this: All this is true; it happened on a definite date in history.

When the people heard the message of Peter they were cut to the heart and said to Peter and the other apostles: “Brothers, what shall we do?” The proclamation was the response. “Repent and be baptized, every one of you, in the name of Jesus Christ so that your sins may be forgiven. And you will receive the gift of the Holy Spirit.” The gift of the Holy Spirit and forgiveness of sins is not for the privileged few like the apostles and the 120, but the message must go out to the whole world. “It is for you and your children and for all that are far off, for whom the Lord our God will call.” The roots of the proclamation go back to Abraham to whom God said: “In your seed shall all the nations of the earth be blessed.” Jesus Christ is the seed of Abraham. The proclamation of this gospel must go forth from every pulpit till Jesus comes again.

A new society was created on that day of Pentecost. It came to concrete expression in the conversion of 3000 people who accepted the message and were baptized and added to the church on that day. The New Testament church was born. Its practice of worship and church life form the pattern for the church to follow: “They devoted themselves to the apostles’ teaching and to fellowship, to the breaking of bread and to prayers.” Here is a creation of God, a new society characterized by love, generosity, kindness and fellowship. Pentecost is the day of God’s mighty acts.

How does the church today compare with what happened on Pentecost? Is there still a true church of Jesus Christ? YES INDEED. Where the Word of God is purely preached, the sacraments Biblically administered, and Christian discipline exercised according to the Bible, the church of Jesus Christ is alive and well. When I saw Peter Jennings’ special on ABC entitled “In the Name of God,” I thought of how far some expressions of Protestant Christianity have drifted from the New Testament model. Let us be vigilant and faithful to the Word of the Lord lest the days come when there will not be famine of food or a thirst for water, but a famine of hearing the words of the Lord (Amos 8:11).