The Reformed tradition has exhibited a range of thinking and practice regarding the use of patriotic music in corporate worship. Does the practice of free speech warrant the State’s advocacy of civil religion? Conversely, does this social freedom justify the Church’s promotion of the state as a quasi-confessional institution.

The state, as a minister of divine justice and rule in the world, does not have the duty and responsibility to endorse the Christian religion (or any religion). Its God-ordained task is to protect and provide for its peoples (ensuring their general health and welfare), including the free expression of religious belief and practice by all living within its borders. Christian magistrates, in particular, and members of the body of Christ in general, have not been given the mandate to establish true religion (i.e., biblical Christianity) as the confession of the state.

At the same time it is inappropriate for the church to confess the name of God (as an act of worship) while extolling the virtues of the nation (as in the lyrics, “My country, ‘tis of thee, sweet land of liberty, of thee I sing”). The confessional church’s allegiance is to God and to Him alone. Of course, the community of faith in worship prays for governmental leaders and for the general well-being of the nation and nations of the world.

Civil religion, now as in the past, can only foster a distorted and erroneous conception of God, the sovereign Lord of the church, the Creator and Redeemer of humanity.

The patriotic song is a lyrical composition written to extol the virtues of the country to which one belongs. Its purpose is the expression of one’s allegiance to the nation. It is peculiarly focused upon one people and one nation. The text of the song describes the land and the people which inhabit it. It addresses the national consciousness. 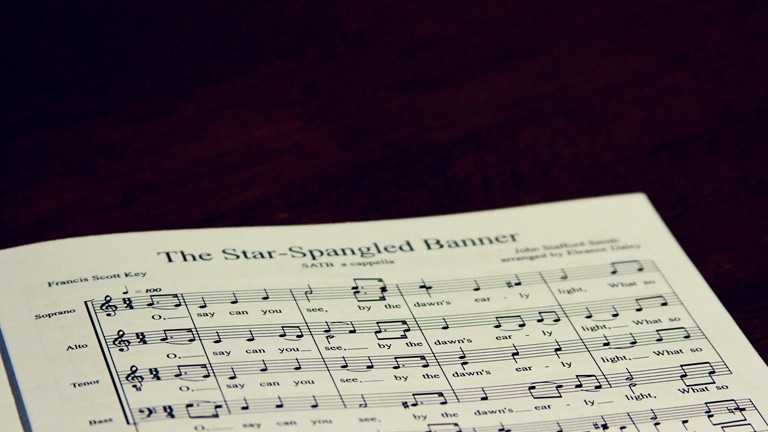 In contrast, the psalms, hymns and spiritual songs of the church are directed exclusively to God. They are means of instilling faith, hope, love, confidence in Christ, praise, and adoration among the saints of God. Hymns in worship belong exclusively to the people of God wherever they meet. They are not, first and foremost, meant to be evangelistic tools aimed at reaching the unconverted.

The Patriotic Song in Worship

Several reasons have been furnished by interpreters of the Bible to exclude patriotic songs from congregational worship.

The first reason follows from the definition of the patriotic song. The purpose of singing patriotic music is at variance with— but not in opposition to — the testimony of the gospel and worship that is exclusively God-centered. This exclusivity is what distinguishes a worshipping congregation from all other gathered peoples. Certainly the Bible calls us to honor those in civil authority and to pray for them, but that is altogether different from using patriotic music in worship.

The second reason may be more difficult to discern and comprehend as members of the body of Christ. We cannot look to Old Testament practice and make a direct transfer from old to new covenant worship. The very question of the relationship between the two Testaments is itself a difficult and complex subject.

In the wilderness of Sinai ancient Israel was constituted by God a special, holy nation. It was properly described as a theocracy. No other nation in the world at that time down to the present was singled out as was Israel of old. This nation was closely identified with the kingdom of God. Since the coming of Christ, no nation, including Israel, now occupies a special place among the nations. In the body of Christ, there is neither Jew nor Greek. We are all one in Christ. No longer is there a comparable holy, geo-political entity on the face of the earth.

As a theocracy, ancient Israel was in a unique position — divinely constituted and divinely ordered. So long as Israel was faithful and obedient, that is, so long as Israel kept the law of Moses, she was promised blessing and prosperity in the land of Canaan. God was painting a portrait, in time, in history, in anticipation of the new and better covenant in Christ’s blood.

The nation-states of this world have been instituted by God; nothing occurs in human government that is not under the sovereign rule and control of God. However, the state — with the exception of ancient Israel — has not been granted authority to maintain or enforce religion. The state is not a confessing body; its role is purely civil, not religious.

Of course, it is appropriate and dutiful for Christian politicians to testify to their faith and to deliberate all political and social matters in the light of the teachings of the Bible. The same is true for Christians working in every arena and vocation in life. The legitimate separation of church and state as distinct institutions ordained by God does not preclude Christian testimony and witness-bearing in the market-place, in the classroom. or elsewhere.

Are Christians free to sing and perform patriotic music? Of course they are. All in its proper place and time. Christians have a duty to honor and respect civil leaders and to pray for the nation’s welfare.

Are there times when patriotic songs should not be sung? Are there occasions when Christians must voice dissent? Such a time arises when there are blatant offenses committed by a nation against God or humanity. Recall the atrocities committed against the Jews. Should a German Christian extol the virtues of his country in such times? I think not.

Can Christians gather together to sing patriotic songs? Yes, but not as the community of faith in worship. In general, singing and playing patriotic music in concert halls, in sports arenas, in shopping mails, in outdoor parks is certainly appropriate and healthy for any nation. They are to do this, however, without identifying themselves as a religious, confessional body. To do so is to confuse the two distinct realms of church and state.

Dr. Mark W. Karlberg has three earned degrees from Westminster Theological Seminary in Philadelphia, including a doctorate in Reformation/Post-Reformation studies.