“When they saw the star, they rejoiced with exceedingly great joy.” Matthew 2:10 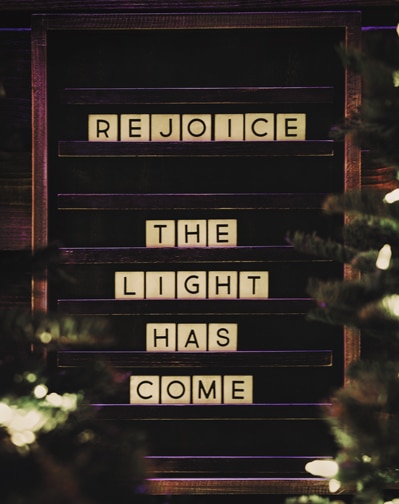 The entire Old Testament breathes out an expectancy concerning the Messiah who is to come. The anticipation of Scripture is intense for the coming of the One who is anointed by God the Holy Spirit to be the Christ: our chief Prophet, our only High Priest, and our eternal King. Indeed, the Old Testament is the grand Advent “sermon” of the Christian Church! Believing covenant people had been told in the Old Testament Scripture what to expect on Christmas. Isaiah draws our attention to Jesse’s stump: it is going to sprout a Branch that would have God’s Spirit upon Him. Micah tells us to keep our eyes fixed on the small hamlet of Bethlehem because a new 5hepherd-King would arise there to take care of the people of Israel.

Then it happens: the great event occurs in Bethlehem when the prophesied Word becomes the incarnate Word. But God does even more. He speaks (without words) to Gentiles, the Magi of the Orient, addressing them in a language that they could understand: a star appears to them. They know what this means. It signifies to them that a king has been born, and for many in ancient times the star represents a deified king, a living god on earth. More than this, the god-king born is not their own king. He is the king of the Jews! So what is quite remarkable is their reaction to the appearance of the star: they come to worship Him (Matt. 2:2).

In Daniel 5 there is the appearance of divine signs at the banquet of an unbelieving Oriental king. No one can interpret the signs until Daniel comes to reveal that the Babylonian kingdom, the kingdom of apostate man, has been measured by God and found severely wanting. It will be cut off. But this is not the end of the story. For God’s plan is that all nations shall be blessed through the Messiah. The divine handwriting on the Babylonian wall caused sheer terror to the Gentiles. In Matthew 2 the divine star causes sheer joy and delight. Matthew 2:10 tells us that the wise Gentiles “rejoiced with exceedingly great joy.” God leads them by the silent message of the star until they find the King, Jesus Christ.

They entered the house where the Christ Child is residing temporarily. Christ has done nothing yet, except to humble Himself, veil His heavenly glory, and take on the form of a servant. He has not yet spoken any sermons, He has not yet healed the sick, and He has not yet fed thousands of people. But the Eastern Gentiles, astrologers, fall down to worship Him. They do more than worship: they open their pocketbooks, shall we say, and they present Him gifts. Gold befits a King…and Jesus is a King…great David’s greater Son. Frankincense is burned as a symbol of sincere prayer to God, and Jesus is God Incarnate. Myrrh, an aromatic gum, befits a suffering Servant who came into this world to suffer and die for elect Jews and elect Gentiles. The worship which they offer Him is not done grudgingly and with dull formality. They rejoice to see the message in the heavens; they are glad to see the newborn King in the flesh.

A great sign has appeared in our history with the coming of the Messiah. Christ is born; glorify Him! But Jerusalem is troubled, Herod is determined to thrust a sword into Him, and the religious leadership can only quote Bible verses about His birthplace. They do not believe the Bible (the Word made Scripture), they do not believe the message in the heavens (all creation makes God known, remember!), and they will not travel the five-mile distance to see Jesus Himself (the Word made flesh). But these Gentiles do!

Matthew’s original audience was largely Jewish Christians, it is thought. Yet Matthew tells us that the Gentiles were the first to seek Him out, doing so with great gifts and in a spirit of great joy. Jewish sentiment ran something like this: “Whoever learns anything from a magus (Gentile astrologer) is worthy of death.” Yet the grace of the Lord acts in such a way as to draw these Eastern “kings” to seek Him out and to worship Him with great joy.

Their joy was like a cup that was running over. Yet, it must be admitted, their knowledge of Jesus Christ and of the Old Testament Scripture, which spoke of His wonderful Advent, must have been quite minimaL Even more, Jesus’ own earthly ministry was focused on reaching Israel’s lost sheep and not the Gentiles. So it is wonderful to witness these Gentiles going the distance and not stopping until they found Him of whom the star spoke. When they saw the star, they rejoiced; when they saw the young Child, they fell down and worshiped Him.

What about us? Examine yourself in the light of this Gospel. Does our knowledge of the Lord and His wonderful Word increase in us the kind of joy that overflows, that moves us to seek Him more, that stirs our devotion in giving to His kingdom? We Gentiles who have received so much from this King, owe Him our very life. At the beginning of this Gospel we see Gentiles coming to the Lord Jesus Christ, while at the close of Matthew we hear our marching orders to go to the Gentiles to make them full-fledged disciples of this universal King. Because of that zeal to spread the Gospel, our ancestors heard the good news. Because of God’s grace revealed in His Word and secured by the finished work of Jesus Christ, we today hear that same Gospel, and we are brought to saving faith and great joy. Glorify Him!

Rev. Mark Vander Hart is professor of Old Testament at Mid-America Reformed Seminary in Dyer, IN.