Geology, for instance, revealed that the lower and higher sorts of animals do not follow each other in sequence but as a matter of fact existed alongside of each other ages ago.

Paleontology did not come up with a single piece of conclusive evidence for the existence of transitional types between the several species of organic beings. Still, ac­ cording to Darwin’s theory of extremely gradual evolution by way of extremely small changes, these types should have been present in quantity. Even the ardent­ ly sought after and energetically pursued intermediary type between man and the ape was not discovered.

Embryology, it is true, does paint to a certain external similarity between the various stages in the development of the embryo of man and that of other animal bodies. But this Similarity is external for the simple reason that from an animal embryo a human being is never born, nor an animal from a human embryo. In other words, man and animal go in different directions from conception on, even though the internal differences cannot then be perceived.

Biology has up to this time offered so little support to the proposition that life generated itself that many now accept the impossibility of that and are returning to the idea of a special life force or energy.

Physics and chemistry, in proportion to the extent to which they have pressed their investigations, have found more and more secrets and marvels in the world of the in­ finitely small, and have caused many to return to the thought that the basic constituents of things are not material entities but forces. And—to mention no further evidences—all the efforts that have been put forth to explain consciousness, freedom of the will, reason, conscience, language, religion, morality, and all such manifestations, as being solely the product of evolu­tion have not been crowned with success. The origins of all these manifestations, like those of all other things, remain surrounded in darkness for science.

For it is important to note finally that when man makes his appearance in history he is already man according to body and soul, and he is already in possession, every­ where and at all times, of all those human characteristics and activities whose origins science is trying to discover. Nowhere can human beings be found who do not have reason and will, rationality and conscience, thought and language, religion and moral­ ity, the institutions of marriage and the family, and the like. Now if all of these characteristics and manifestations have gradually evolved, such an evolution must have taken place in prehistoric times, that is, in times of which we know nothing directly, and about which we make surmises only on the basis of a few facts perceived in later times. Any science, therefore, which wants to burrow through to that prehistoric time and to discover the origins of things there, must from the nature of the case take recourse to guesses, surmises, and sup­ positions. There is no possibility here for evidence or proof in the strict sense. The doctrine of evolution generally and that of the descent of man from the animal parti­cularly are not supported in the least by facts supplied by historic times. Of all the elements on which such theories are built nothing remains. in the end but a philosophical world-view which wants to explain all things and all manifestations in terms of the things and manifestations themselves, leaving God out of account. One of the proponents of the evolutionary view ad­mitted it bluntly: the choice is between evolutionary descent Or miracle; since miracle is absolutely impossible we are compelled to take the first position. And such an admission demonstrates that the theory of the descent of man from lower animal forms does not rest on careful scien­tific investigation but is rather the postulate of a materialistic or pantheistic philosophy.

By permission of the Wm. B. Eerdmans Publishing Company 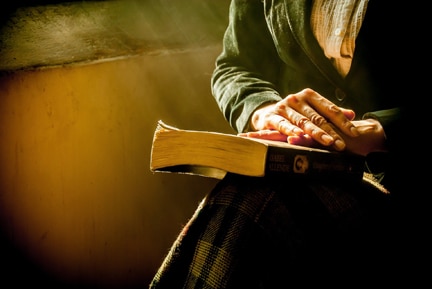