1. WHENCE AND WHITHER WILL HE COME AGAIN?

In order to give a correct answer to the question, “Where is Christ coming from?” it is well, first of all, to know where he went at his ascension. As to the latter, the language is clear enough. More than nineteen centuries ago our Lord ascended physicalIy and visibly “from the mount called Olivet” (Acts 1:12). “As the disciples were looking. he was taken up. and a cloud received him out of their sight” (Acts 1:9). “He was carried up into heaven” (Luke 24:51). “He passed through the heavens” (Hebrews 4:14), and “sat down at God’s right hand, far above all rule and authority and power and dominion and every name that is named” (Ephesians 1:21).

In such a description the exact line of demarcation between the physical and the spiritual, between the literal and the figurative, is hard to draw. One fact is clear, nevertheless, namely, that heaven is a place and not only a condition. And also another fact is not open to doubt: when Christ’s human nature arrived in heaven. his body did not become diffused or distended all over heaven, neither did it become omnipresent.

Similarly, therefore, when our Lord returns, he will return from the place which he last occupied in heaven. He will descend to, and will be seen coming upon, the clouds, and will then go forth to meet his people, while they too will ascend from the earth “to meet him in the air.”

From passages such as Job 19:25, Acts 1:11, and Zechariah 14:4, some (for example Dr. Abraham Kuyper Sr.) have concluded that with a view to the final judgment Jesus will then descend to the earth, where. as they see it, “the great assize” will be held. Others (for example Dr. Herman Bavinck) express themselves less definitely, and simply state that the final judgment will require a place where, and a certain amount of time during which, it can be held. 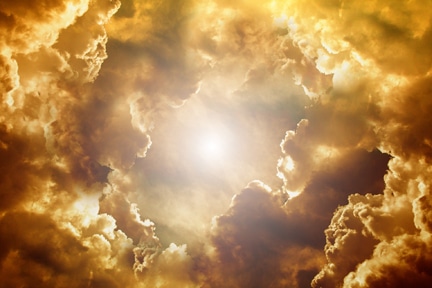 His coming will be very sudden. It will take people by surprise. A moment ago, “the sign” was not yet there. All of a sudden, there it is! (I Thessalonians 5:1, 2, 3).

It will introduce a series of events which will follow one another in. rapid succession. Notice the language in such passages as I Corinthians 15:52 and Revelation 20:11.

It will be a most glorious coming: “the revelation of the Lord Jesus from heaven with the angels of his power in burning fire” (verse 7 of the section which you read a while ago from your Bibles). Jesus, together with a multitude of angels and of the souls of the redeemed, (1 Thess. 3:13) leaves heaven.

It will be a physical coming, as has already been indicated.

Will this second coming also be visible? (Theoretically it could be physical, bodily, but still not seen by the eyes of men.) And will it be audible; that is, will there be sounds in connection with it. so that people will not only see it but also hear it? These two questions will be answered in our Outline on The Rapture.

Here are some of the answers given in Scripture: he will return in order

b. “to be glorified in his saints and to be marveled at in all who believe” (see verse 10).

1. At his second coming, where will Jesus be coming from and where will he be going to?

2. Is heaven a place? Is Jesus physically present in heaven right now?

3. Who will accompany the Lord at his coming?

5. For what purpose will Jesus come again?

1. What is the difference between the Reformed and the Lutheran view of Christ’s ascension? Would this have any bearing on the explanation of the second coming?

2. How does the parable of the five wise and the five foolish virgins teach that after Christ’s return there will no longer be any opportunity to repent and be lived?

3. A cloud figured in Christ’s ascension, and cloud, again are mentioned in connection with the Lord’s return. Do these clouds, in addition to their literal meaning, have any symbolical significance in Scripture?

4. What can we do in order to fill the minds and hearts of our children with true joy and gratitude whenever they think of Christ’s return?

5. How will Jesus be “glorified in his saints” at his return?

*For a detailed explanation of this chapter by the writer of these outlines, see his New Testament Commentary on I and II Thessalonians. Editor