In this Outline and in the next one we discuss the second coming. Now there are all kinds of border-themes; such as, the Resurrection, Armageddon, the Rapture, the Final Judgment, the Millennium, the New Heaven and Earth. Such subjects we hope to take up later, They should not be discussed in connection with Outlines XI and XII.

A convenient way to treat the matters before us is to ask the following six questions:

Who will come again?

How often will he come again?

When will he come again?

Whence and whither will he come again?

How will he come again?

Why (for what purpose) will he come again?

The first three of these questions will be taken up in the present Outline, the last three in the next one.

“Jesus, of course,” you answer. And if I should say, “Yes, but in what capacity?” you are ready at once with an answer. You say, “As Judge, of course.” And that answer would be entirely correct. Correct, but hardly complete.

For the believer it is certainly comforting to think of him as coming again as “Son of man” (Matthew 24:30; 2.5:31 ) the One who through suffering attained unto glory, and who accordingly deeply sympathizes with his people who throughout the ages and especially during Satan’s little season of great tribulation will have been suffering bitterly for Christ’s sake. They will see him come in glory, as predicted by Daniel, and by himself when he stood before Caiaphas.

He comes, moreover, as “the Bridegroom,” in order that he may take the bride unto himself.

Very beautiful is also what was stated in the section which you read from your Bibles when you began this lesson. He will come as “this same Jesus” (or simply “this Jesus”). See the poem on this, in Treasury of Poetry, p. 404. Note also the passage:

“And it came to pass. while he blessed them he parted from them” (Luke 24:51 ). So also, you may be sure that “while he blesses them.” He will come again. Not only will it be “this same Jesus,” but he will also come “in like manner.” 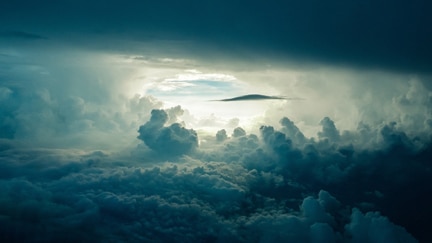 2. How often will he come again?

Dispensationalists speak of at least two second comings: a first coming for the saints, a second coming with the saints. They also talk about three bodily resurrections; three, four, five, or six judgments; several places of torment; two chosen peoples; several varieties of evil beings; seven dispensations; and eight covenants (though not all dispensationalists agree as to the exact number of each). Now, if anyone thinks that I am just saying these things, get out your copy of The Banner of May 18, 1934, p. 440, where you will find the evidence.

Now all this makes of the Bible a very difficult book. Here I would like to ask, “How often did Jesus ascend to heaven?” You answer, “Only once, of course.” Well, then here is your answer (I quote from the portion which you read at the beginning of the hour), “This Jesus, who was received up from you into heaven, shall so come in like manner, as ye beheld him going into heaven.” If he went into heaven only once, he will also come again only once. Nowhere does the Bible even hint that there will be more than one glorious return.

3. When will he come again?

We know that he will not come until the proclamation of the gospel will have run its course (Matthew 24:14) and the man of sin win have been revealed (II Thessalonians 2:3). as has been explained in previous Outlines. We also know that he cannot come again until the fulness of both Gentiles and Jews will have been gathered in; that is, he will come “when the number of the elect is complete” (II Peter 3:9; cf. Article XXXVII of The Belgic Confession). For the rest, all we know is that “of that day and hour knoweth no one, not even the angels of heaven, neither the Son, but the Father only.”

A. Question, Answered in the Outline

1. What are the six questions discussed in this outline and in the next one?

2. Who will come again; that is, what comforting names are applied to him in Scripture?

3. How often will Jesus come again?

4. In which sense is it true that Dispensationalists have made of the Bible a book difficult to understand?

5. When will Jesus come again? Will people be converted after his return?

1. We have discussed the titles of comfort given to the returning Lord. But are there also titles of terror, showing in what capacity he will deal with the wicked?

2. Some treat Dispensationalism as a matter of complete indifference. They say, “Well, the last word has not been written or spoken about this.” Do you think that this is the proper attitude for us to take?

3. According to Acts 1:6–8, what erroneous ideas did the disciples have concerning the establishment of the kingdom, and what did Jesus mean by the answer he gives them in verses 7 and 8?

4. Is it not true that Jesus know all things? How, then, can Matthew 24:36 say that the Son does not know “that day and that hour”?

5. How do the Seventh Day Adventists arrive at their date 1844 on the basis of Daniel 8:14? What is the correct interpretation of that prophecy?