People who belong to the Reformed community have become thoroughly accustomed to the use of the words REFORMED and CHRISTIAN. This is especially true of those who belong to the Christian Reformed Church. We wish to submit in this article some reflections on the historical meaning and the current use of these two terms. It may be that in as small a thing as the use of a pair of words we shall detect a certain trend in the thinking of many who themselves claim to be both Reformed and Christian.

Patently, the words are not identical. Both are freighted with historical connotations. The designation of the church as Christian dates back to the early days of the apostolic church. In current usage the word Christian may mean anything from full recognition of the kingship of Christ to a certain vague and undefined relationship to him.

The word Reformed naturally takes its meaning and coloring from theProtestant Reformation. From this initial observation it would appear that the word Reformed is narrower than the word Christian. It describes and defines what is Christian. While the Roman Catholic church heartily embraces the claim to be Christian, it eschews the thought that it is Reformed. To it there is a disparity between Christian and Reformed, for only that which belongs to “Mother Church” is truly Christian. Reformed, in its conception, means apostate, heretical, accursed, deformed.

To the churches of the Reformation, on the other hand, only that which is truly Reformed is fully Christian. The Reformation purged out the excesses and evils of the mediaeval church and Romish theology.

For those whose framework of doctrine and ecclesiastical commitments have been influenced largely by the life and teaching of John Calvin, only that which is Calvinistic is entirely worthy of the name Christian. Here Christianity has come to its own. This is Christianity rightly so-called. Here the teachings of the Scriptures shine with the least amount of adulteration. Here the body of believers comes to its purest expression.

Of recent years, however, we hear the expression “not Reformed but Christian.” This saying is related to the modern trend toward “Biblical theology.” It appears on the surface to be purely a call back to the Bible.

If it merely means that we must have less dogmatic and scholastic theology and more Biblical theology, then we can only welcome the expression. We cannot deny that much static has crept into the message of the church by way of a scholastic reiteration of dogmatic formulations. Let us openly admit that in some instances the voice of Scripture has been “jammed” by our traditional exegesis. We can only greet with rejoicing any attempt to go directly back to the Bible and let it speak for itself, without the impediment of the scholastic pronouncements of the dogmatic theologians. There must be free and steady intercourse between Bible and doctrine.

But if this is meant, then the phrase “not Reformed but Christian” is inept indeed. Actually, the plea for a greater stress upon Biblical theology and a more direct connection between dogmatics and exegesis is nothing else than a continuation of the Reformation. The Reformation was a return to the authoritative Bible and its message of redemption by grace alone. We man never speak of the Reformation as a finished product. It is a continuing movement. God’s Spirit is still busy leading the church of Christ into the truth. 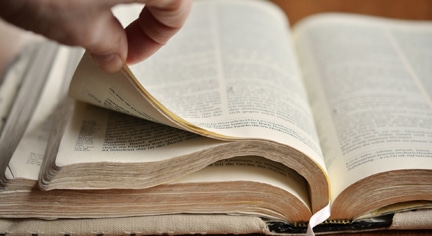 There is, however, in use today another meaning of the phrase “not Reformed but Christian.” This connotes not so much a return to the Scriptures—which every Reformed person should heartily welcome—but a departure from what is carefully defined through a long historical process of study and exegesis, to that which is more vaguely comprehended by the great mass of believers. In this respect the expression suggests that we leave the realm of detailed delineation to travel in the field of broad and “common” definitions.

To distinguish between what is of greater and lesser importance is in itself not wrong. We may even do this in dealing with the redemptive truth of Scripture. We may note differences in the Bible between what is commanded in respect to a particular situation (such as the command of Jesus to the disciples to fetch a colt and the injunctions of Paul in respect to the liturgical irregularities in Corinth) an d that which is of universal application for the church in every age and place (such as the standing order of the Great Commission and the admonition of John to abide in the truth).

In making a distinction between what is of greater and lesser importance in the teaching of the Scriptures, the Bible itself leads the way. The sacraments which were instituted by Christ for the New Testament church must be understood in the light of this distinction. The sacraments do not add to the body of truth contained in the Word. They are rather an underscoring of the central truth of the atonement through the suffering and the death of Jesus Christ. Sacramental truth, therefore, may be called the central truth, par excellence. It brings us face to face with the person and work of the Redeemer who is THE TRUTH. There is therefore some warrant in declaring that the line between central and peripheral truth should be drawn between sacramental and non-sacramental truth. Extreme caution, however, should be exercised in pressing this distinction so far that it detracts from the entire Word which is “profitable for doctrine, for reproof, for correction, for instruction in righteousness, that the man of God may be perfect, thoroughly furnished unto all good works” (II Tim. 3:16).

But this gives no warrant to identify the line between the more and less important with that between Christian and Reformed. If this were true then we would have the full right to advocate that, while it is necessary for theological students to learn what is Reformed, the catcchumens of our church need learn only what is Christian. Books on dogmatics should then be Reformed, but the Children’s Story Bible need be merely Christian.

One of the finer insights of the Reformed faith is that all redemptive truth is one. Truth is organic. The Scriptures reveal one grand redemptive plan which has gradually un· folded through the ages and came to a climax in the coming of the Son and the outpouring of the Holy Spirit. The house of truth is not built up of so man y separate building blocks which may mechanically be arranged to suit the builder’s fancy. Actually, it is better to speak of the body of truth than the house of truth. The power of adhesion by which the one part is joined to the other is not mechanical but dynamic. No part of the body can get along without the rest. No part of the body of truth can be replaced.

Those Biblical truths which are sometimes tagged the distinctive Reformed teachings, such as the sovereign grace of God and unconditional election of the believer in Christ do not therefore hang loosely onto the body of truth, like a satellite circling around a planet. Rather they define the very heart of God’s grace in Jesus Christ. They describe the very life-flow of the church. They therefore possess every right to be called Christian.

The Reformed interpretation, rather than being considered an addendum, must be understood as normative all along the line of Christian truth. It is determinative for the understanding of the Nativity as well as the character of the Church of Christ and the life of the saints. It determines the meaning not only of the Word, but also of the sacraments.

The closer we come to the heart of the message of redeeming grace, the more serious is any divergence from the truth. Consequently, the greater is the damage that is done by non-Reformed (i.e. non-biblical) teaching. The closer we come to the central message of the Bible, the more we must be on our guard that we remain truly Reformed and by that token truly Christian. When the Reformed believer stands face to face with God as he revealed himself in Jesus Christ, the Reformed truth and the faith of the heart blend into one.

The great significance of the doctrine of the covenant of grace (an exclusive of Reformed theology) in the life of the church should remove all doubt that there ever comes a point where we can safely leave what is Reformed behind to enter the “pristine” realm of the purely Christian. The less developed and educated the believer is, the greater the need that he be instructed correctly. The weaker he is, the more urgent that he be taught only the truth as it is in Jesus Christ. Substitutes and adulterations are especially harmful for children and people who suffer from malnutrition.

It was with a keen sense of awareness of the relevancy of the strictly Reformed teaching for the life of the children of the church that the Westminster divines began the instruction of the Shorter Catechism by saying “man’s chief end is to glorify God and to enjoy Him forever.”

The Reformation was not only a return to the Scriptures, but also to the Christ. It swept away not only that which obscured and corrupted the message of the Bible, but also all that detracted from the shining light of the Son of God. The Reformation had no other purpose than to be exclusively and entirely Christian.

Which ever way you look at it, it is a false dilemma with which we are confronted in the phrase in question. While the words are admittedly not identical they are most assuredly fully harmonious. The true Christian is a Reformed Christian; the Reformed Christian church, we confess, is the true church of Jesus Christ.