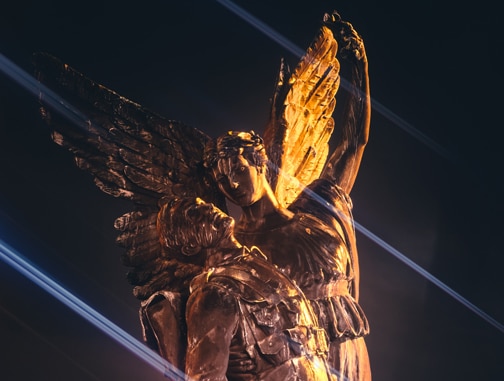 So why don’t we talk about angels? There are several reasons. One is the way angels are represented in many Christian books and picture Bibles. They are usually pretty girls with wings and a halo over their heads. Another reason we do not talk about angels is because we are afraid of going overboard. We do not want to give angels priority over God, or make it sound like we rely on them for our only help in trouble. But are these good reasons not to talk about angels? What does the Bible say about angels? What exactly do they do? Should we be talking about them?

The Bible has a lot to say about angels. Angels were created by God (see Romans 8:38-39), yet they are frightening spiritual beings. Psalm 104:4 says, “[God] makes His angels spirits, His ministers a flame of fire.” Angels struck fear into the hearts of those who saw them. Zacharias “was troubled, and fear fell upon him” when he saw the angel (Luke 1:12). The shepherds were “greatly afraid” when the angel announced Christ’s birth (Luke 2:9). The angel who appeared to Mary had to say, “Do not be afraid” (Luke 1:30). In fact, most angels begin their message with the words: “Do not be afraid.”

Because angels are created beings, we must not worship them. In Revelation 22, John falls down to worship the angel who showed him the new Jerusalem. The angel responds: “See that you do not do that. For I am your fellow servant, and of your brethren the prophets, and of those who keep the words of this book. Worship God” (verse 9). In Colossians 2:18, worship of angels is listed along with false humility and rejecting Christ as something we must avoid.

The Role of Angels

The word angel means “messenger.” One of their main duties is to bring God’s messages to men. Angels appeared to Joseph in his dreams (Matthew 2:13, 19), appeared to the shepherds, telling them of Christ’s birth (Luke 2:815), and appeared to Cornelius, telling him to go find Peter (Acts 10:3-7). An angel told Philip to go to the road where he met the Ethiopian eunuch (Acts 8:26). An angel told Paul before the shipwreck that there would be no loss of life (Acts 27:23-24).

Angels also carry out God’s will. Angels rescued Lot from Sodom (Genesis 18-19). God sent an angel to lead the Israelites out of Egypt (Numbers 20:16). When David sinned by numbering the people (2 Samuel 24) God sent an angel to plague the Israelites. An angel rescued Shadrach, Meshach, and Abednego from the fiery furnace (Daniel 3:28). When the apostles were imprisoned for preaching (Acts 5:17-21) an angel opened the prison doors and let them out, commanding them to preach again in the temple. An angel delivered Peter from prison and impending death (Acts 12:7-11). An angel struck Herod for not giving glory to God, so that he was eaten by worms and died (Acts 12:20-23).

Angels minister to Christians. Hebrews 1:14 says: “Are they not all ministering spirits sent forth to minister for those who will inherit salvation?” Angels take great interest in man’s salvation. They rejoice when a sinner repents (Luke 15:10), and they desire to look into the gospel (I Peter 1:12). Angels also provide bodily protection for the elect. In II Kings 6, the Syrian army surrounded the city where Elisha was. Elisha’s servant was afraid, and Elisha prayed that his eyes would be opened: “And behold, the mountain was full of horses and chariots of fire all around Elisha.” (v. 17). Psalm 91:11-12 says: “For He shall give His angels charge over you, to keep you in all your ways. In their hands they shall bear you up, lest you dash your foot against a stone.”

Angels serve God and Christ. Angels ministered to Jesus after His temptation with the devil (Matthew 4:11) and in the garden of Gethsemane (Luke 22:43). Angels were created holy, and except for the devil’s angels, who will be cast into hell (Matthew 25:41) they are still holy (Matthew 25:31). Thousands of angels surround the throne of the Lamb and sing praises to Him (Revelation 5:11-12).

Angels will play a big role in the final judgment. Matthew 13:39-43 informs us that angels are the reapers who will gather those who offend, and cast them into the furnace of fire. Jesus said in Matthew 16:27: “For the Son of Man will come in the glory of His Father with His angels, and then He will reward each according to his works.” He also said in Matthew

24:31: “And He [the Son of Man] will send His angels with a great sound of a trumpet, and they will gather together His elect from the four winds, from one end of heaven to the other.”

The Angel of the Lord

The Angel of the LORD is the least understood angel mentioned in the Bible. In some passages he seems to be God, in others he speaks interchangeably as God and as His messenger, and in others he appears as a separate being from God. In Judges 13, the Angel of the LORD appears to Manoah and his wife, and tells them they will have a son, Samson. The Angel will not tell them his name because it is wonderful. However, he says in verse 16, “Though you detain Me, I will not eat your food. But if you offer a burnt offering, you must offer it to the LORD.” When Manoah offered a goat, the angel ascended in the flame of the altar. After this, Manoah says to his wife, “We shall surely die, because we have seen God!” She replies, “If the LORD had desired to kill us, He would not have accepted a burnt offering and a grain offering from our hands.”

In Genesis 22, when Abraham is called to sacrifice Isaac, the Angel of the LORD stops him, and then says in verse 16: “By Myself I have sworn, says the LORD, because you have done this thing, and have not withheld your son, your only son, I will bless you.” It is unclear whether the Angel of the LORD is just communicating God’s message to Abraham, or whether he is God Himself. I would argue that, for our understanding of God and of angels, it does not matter. If we needed to know the identity of the Angel of the LORD, the Bible would tell us.

So now we get to the big question: should we talk about angels? We have seen that they were created by God to glorify Him and to minister to His people. But are they a part of daily life, or at least enough of a part, that we should talk about them?

We have an example in the life of Abraham. In Genesis 24, Abraham sends his servant back to his home country to find a wife for Isaac. Listen to what he says in verse seven: “The LORD God of heaven, who took me from my father’s house and from the land of my family, and who spoke to me and swore to me, saying, ‘To your descendants I give this land,’ He will send His angel before you, and you shall take a wife for my son from there.”

Why did Abraham say, “God will send His angel before you”? Surely it would have been just as easy to say, “God will go before you.” We see that Abraham chose to talk about angels while giving God the glory.

We can and should follow the example of Abraham, and talk about angels in the context of praising God. “But it would be too easy to worship them,” one may argue, “wouldn’t it be better not to talk about angels and avoid the danger?”

It may be true that there can be a danger of going overboard. However, there is also the danger of going overboard in other things. For example, we praise God for the sun, because it brings us warmth and light. Is there a danger of worshiping the sun? Yes. But we give God the praise and glory instead of the sun, and thus God is more glorified than if we did not talk about the sun. The same holds true for angels. We must always use them to point us to God, but we should be talking about them.

John Calvin wrote, “So, then, whatever is said concerning the ministry of angels, let us direct it to the end that, having banished all lack of trust, our hope in God may be more firmly established.” The next time you go on a trip, instead of saying, “God protected me,” say, “God sent His angel to protect me.” Then follow it with “Thank you, LORD, for ministering to us through your angels.” To God be all the praise and glory.