As Sputnik and Mutnik revolve fl. around the earth, so our thoughts and those of millions of men are today revolving around these earth satellites, wondering what they really mean.

We can say nothing about the scientific aspect of Russia’s amazing achievement. This is not our field. Neither shall we attempt to comment on the military significance of these most sensational happenings of the year 1957, though their implications for national defense seem frightening. We arc concerned in these lines only with the spiritual significance of the matter. From this point of view it makes absolutely no difference whether man-made satellites are launched by Russia, the United States, or some other nation.

The sending into space of Sputnik and Mutnik has preceded by only a few weeks our commemoration this month of the birth of our Lord and Savior Jesus Christ. Every thoughtful Christian must sense more or less dearly the connection and the antithesis, or contrast, between these two events.

Our first thought is that the intense and unflagging interest of mankind in things astronomical testifies to the truth that man was made by God not only to inhabit and subdue the earth but also to study the universe. This vast and almost limitless universe is God’s world and man was created to ‘“consider thy heavens, the work of thy fingers, the moon and the stars…” God wants men to study the heavens and to marvel at the wonders of his astounding handiwork First of all, it is meant to be a reminder of our smallness. “When I consider thy heavens what is man, that thou art mindful of him? and the son of man that thou visitest him?” 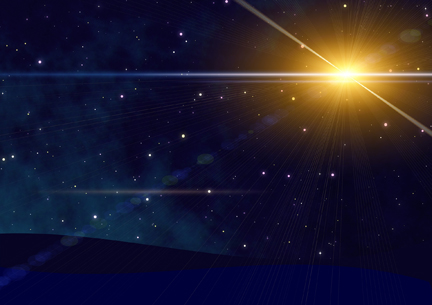 On the other hand, all the star-gazing of astronomers and all the feverish attempts of scientists to penetrate into the secrets of the heavenly bodies and to make direct contact with them are an eloquent testimony to the fact that man, though created to have dominion over the earth, under God, was at the same time endowed with an ineradicable desire to investigate the universe scientifically.

We believe that though man is privileged and even required to study the universe, for the sake of seeing more of the glory of the Creator. he was not made to inhabit or take possession of any other globe. He was given dominion over the earth (Genesis 1:26) but not over any star or any planet not our own. It is our opinion that any attempt to reach another planet and subdue it, claim and use it, will meet with disaster.

At the same time man as the image-bearer of God was made to think God’s thoughts after him and to explore with his intellect not only the vast reaches of the solar system but the entire universe, whose size alone defies our imagination. It is significant that astronomy was one of the earliest sciences. We may laugh at man’s plan to travel to the moon and even to Mars but it is simply an extravagant manifestation of his unique privilege to follow God in his thoughts, so to speak, from one end of the universe to the other.

However, this is the tragedy of mankind’s ambition to explore the astral heavens that he has lost the vision of God who has created all things by the word of his power. We are astounded at man’s folly when we consider that as he inspects the vast workshop of the infinite and almighty God he fails to see his Maker. The reason is that, even though he can see inconceivably far into almost endless space, he has lost his spiritual eyes, the eyes of faith. He sees the visible heavens but he is blind to its Maker and Preserver.

Man was not only created to study the heavens; he also has a heavenly destiny and destination. He was made to inherit a higher and better world than this present earth. All his efforts to fly to the moon or some other planet may be regarded as an unconscious admission of that fact. He wants a. heaven! But what a heaven is offered him by the cold, atmosphereless surface of the moon or the doubtful areas of Mars! He should have far higher aspirations: to follow Christ who ascended to the right hand of God; to find an eternal welcome in the dwelling place of the most High. And how it would comfort him to know what he now in his unbelief will not accept: that the heaven he should seek will some day descend to the renewed earth when God will come down to tabernacle with men (Matthew 5:5; Revelation 21:1, 2). “Then shall the righteous”—only the righteous—“shine forth as the sun in the kingdom of their Father” (Matthew 13:43).

A final thought. It concerns our Christmas celebration. The salvation of man does not lie in his upward reach to the visible heavens but in the downward reach of our gracious, condescending God.

By reason of his Fall man was banished from the presence of God and is doomed to spend eternity in the depths of heH unless he fixes his hope on Him who came down from the heaven of heavens to live our life and die our death in order to reconcile us to God.

This is the message of the Nativity, the meaning of the Manger and the Cross. Our hope, not only as individuals and as a Church, but also as a nation, of any nation, lies not in what we can hurl into space but only in Him whom Cod sent down to earth in the fulness of the times. Not in Sputnik or any other man-made satellite, but in Christ, God’s man of war, who is able to conquer all the host of wickedness in the heavenly places and some day will destroy all the forces of Antichrist here on earth.

Man Sings a dog into the sky, soon perhaps a human being, to whirl through space. Will that save us? Will that cure the grievous hurt of any nation? Will that bring peace to a world that is soaked in sin and paralyzed by fear? God has provided the remedy by sending down to us his only begotten Son, born of a woman, born under the law. Let the nations hear him, repent of their sins, trust in his grace, and bow before him as Lord of lords and King of kings!

“Say not in thy heart, Who shall ascend into heaven . . . or, Who shall descend into the abyss? . . . The word is nigh thee, in thy mouth and in thy heart: that is, the word of faith which we preach” (Romans 10:6–8). Let us not look into the skies for deliverance but say: “How beautiful upon the mountains are the feet of him that bringeth good tidings, that publisheth peace, that bringeth good tidings of good, that publisheth salvation, that saith unto Zion, Thy God reigneth!” (Isaiah 52:7).