“And she brought forth her firstborn son…and laid him in a manger; because there was no room for him in the inn.” Luke 2:7

Christmas is the season of great joy and gladness. Rightly considered, that time which the church has chosen for the celebration of the birth of Christ should be colored by joyous thanksgiving to God for the presentation of the gift of his grace. Therefore, it is altogether in order that it be a time of singing, of thankful worshipping, and of giving thank-offerings to God. The fact is that much of what goes into our celebration of the birth of Jesus is materialistic and secular. Really, it ought to be a season of spiritual gladness.

The Gladness of Some

In reading the gospel narrative of the birth of the Savior, one is struck by the many expressions of joyful praise to God. The response of faith on the part of those who were directly involved in this event was one of gladness. And yet a sad note is struck in the thought that is suggested by the fact that there was no room in the inn. Mary is involved in the joy of motherhood. The child which she bears is heaven’s King. “His name shall be called Wonderful, Counsellor, Mighty God, Everlasting Father, Prince of Peace.” Then it occurred that the ‘Word was made flesh. But there was no room for him in the inn. 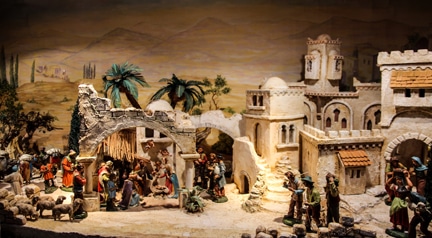 The heavens were involved in this glorious event. A star directed a pathway to the place where he was born. A heavenly angel made announcement of the glad tidings. A host of angels join to form a choir to sing the anthem, “Glory to God.” But there was not a place to be found for him in the inn.

There were a few who shared the joy of the hour. A few wise men from the East observed his star and followed its beckoning beam. In response to the significance of its meaning that a King was born, they came to bring him rich gifts. A few shepherds too responded with a confidence in the angel’s announcement. They came immediately to pay homage to the babe in the manger. But there were many that night who, though close to the happenings, passed by. The innkeeper was one of these. He certainly became the symbol of all those in his day, and all those after him, who were unimpressed with the significance of God’s gift.

The sin·darkened world has not changed since those days. It is still the few who with spiritual discernment follow the direction of the gospel which tells of the coming of the Son of God in the flesh. These few come to him with a broken and can· trite heart. It is only the handful who, coming with a believing heart, are impressed with the fact of the Incarnation, and therefore worship heaven’s King. It is the minority who, having worshipped the Redeemer, return with zeal to publish the glad tidings to others. The masses, deaf with the ring at cash registers during Christmas buying, hear nothing but the reports of booming business. They are blinded with the glitter of tinsel. They are intoxicated with the wine of feasting. Following the example of the innkeeper, they have no room for Christ in their affairs. For them it is a Christmas without Christ.

Christmas without Christ—there are several reasons which make it so for the majority. They fail to make room for the Savior in their celebration of Christmas, first of all because they do not live in the expectancy of the coming of such a Savior as he. Their whole life’s expectancy and devotion is centered around those things that are thoroughly this worldly and materialistic. With their noses to the grindstone of secular and temporal things, they expect no more than what these things bring. They get no more than that. Their Christmas is used only for the satisfaction of these desires. As the innkeeper, who expected just then only a full house and a full wallet, so those to· day, who do not expect to see in Christmas the Redeemer from sin, get only some material gain, only the sight of decorations, only the banqueting around well-laden tables.

Besides, the multitudes really do not want him, not even at Christmas time. The innkeeper really wanted his hotel full, together with the material gain that it brought. The world wants the gifts and the tinsel, the tree and the lights, the food and the feast. That is what Christmas means to them. That is what they want. Tell them about the true significance of Christmas and they are too busy to take note. Oh, they need the tune of the Christmas carol, the story of the gifts of the wise men, but their rushing around is motivated not by these but by what they really want. Yuletide!—Oh yes, many are celebrating then. But what are they celebrating? The fact of the coming of the Son of God in the flesh to bring salvation from sin, or their own devotion to the idols of self and material things?

If you have never had a Christmas with Christ before, then pray that the Holy Spirit may captivate you, that you may recognize in it the coming of God’s gift for the sinner. Follow the direction of the Word which calls you to contriteness and repentance. Come then, recognizing in Jesus the Savior from sin. Receive from him the release from the burden of guilt and the power to live for him. Believe this because he came to make atonement. Bring to him, then, your thank-offerings.

Christmas with Christ—that is what it is for the redeemed child of God who has been saved by the sovereign, selecting grace of God. Yet for him too there are temptations. As he lives in the midst of this world, he is led so often to think more of the commercialism and less of the Christ. Christ must dominate our heart so that our worshipping in this season may be spiritual. Christ must move us so that our gifts may be given properly—out of thankfulness for the girt of salvation. This season with its reminders must lead us to proper reflection of the significance of this story which has so affected us by the working of God’s Spirit. Then we are called upon to present to our neighbors this story together with its significance, in the knowledge that the Holy Spirit uses this means to save others.