The setting was Synod Nyack 2012 of the United Reformed Churches in North America. The Scripture that came to mind was Hosea 4:6, “My people are destroyed for lack of knowledge.” This writer had the opportunity of spending the week of Synod Nyack representing the Board of Reformed Fellowship, the publisher of The Outlook, manning a display table. There, a recurring comment was heard from a number of the elder delegates who stopped by the display table. The comment heard was something like, “My dad used to get The Outlook,” and some added, “But I don’t have time to read all the magazines I already get.”

URC Look Backward and a Question

The United Reformed Churches as a federation is still a teenager in its years of existence. Could it be that already the URC membership and its leaders, of all people, have forgotten what happened when there was an exodus from their former denomination and they formed a new federation? At the time that URC people left their former denomination, it was determined that the people and the elders were not reading and keeping abreast of developments in their denomination and churches. In some degree of ignorance, they were relying completely on their denominational leaders and the ministers for their information. The elders also had given up their responsibilities to the denominational leaders and to their ministers. The vast majority did not use the various opportunities to read and keep informed on the issues and the various views and controversies that were arising.

The prophet Hosea records for us how God’s people had completely forsaken their God. The priests led the people astray and even into terrible sins, while they disregarded the instructions of the few faithful priests. In Hosea 4:6 God declares, “My people are destroyed for lack of knowledge.” God made a similar declaration in Isaiah 5:13: “Therefore my people are gone into captivity, because they have no knowledge: and their honorable men are famished, and their multitude dried up with thirst.” The Israelites once knew the truth, but in the hardness of their hearts they became ignorant and forsook those things and turned aside.

The apostle Paul continually reminds and admonishes us to keep alert to the spirits of the day that would take us away from that which God has revealed in His word. In 2 Timothy 2:15 he exhorts Timothy to “study to show thyself approved unto God, a workman that needeth not to be ashamed, rightly dividing the word of truth.”

Throughout history church leaders and others have turned aside from God’s Word and devised their own interpretations. They have taken many ignorant followers with them. Among the broader Reformed community of believers, even in our day, there continue to arise various interpretations that cause controversy.

Keeping Abreast of the Issues

Also among the Reformed community are various publications dedicated to the defense of the historic Reformed faith. It is their purpose to defend the Reformed faith and define various controversies in light of the Reformed confessions and creeds, grounded on the Word of God. It is the expressed purpose of The Outlook for example, to advocate and propagate the Reformed faith, to nurture those who seek to live in obedience to it, to give sharpened expression to it, to stimulate the doctrinal sensitivity of those who profess it, to promote the spiritual welfare and purity of the Reformed churches, and to encourage Christian action. Yet, such publications find their subscriptions on the decline in our day. God’s people in the URC might well find themselves being destroyed for lack of knowledge.

Reformed Fellowship also offers a variety of books and Bible study materials in defense of the Reformed faith. The board is encouraged by the demand for such books and materials and the response for new materials being published. Some of the excellent materials that once were more in demand now show some neglect, however.

For those who don’t have time or take the time to read such publications as The Outlook, what publications have precedence for them? For some it might be the professional or trade magazine for their line of work. For some it may be a sports or outdoor magazine or an automotive magazine. Like such magazines, Reformed publications help us in our knowledge and understanding of a particular subject, in this case the Word of God and the issues of the day. 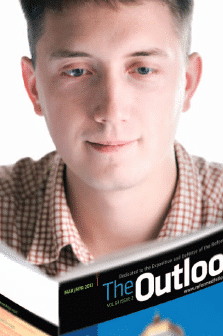 The Primary Source of Knowledge

The primary source of instruction, of course, is the Bible. These other means of gaining knowledge must be in accord with that source. Even the trusted publication of the denomination from which many URC members came eventually published distorted and unbiblical information as being in accord with the Word of God. All other published materials must be in accord with the Word of God and are used to help us to understand God’s Word more clearly. “And that from a child thou hast known the holy scriptures, which are able to make thee wise unto salvation through faith which is in Christ Jesus. All scripture is given by inspiration of God, and is profitable for doctrine, for reproof, for correction, for instruction in righteousness: That the man of God may be perfect, thoroughly furnished unto all good works” (2 Tim. 3:15–17).

How many members in the URC know, or avail themselves to know what goes on at their classis meetings and at the synods? How many know what the issues are within the Reformed churches? Do the elders and deacons keep adequately abreast of their federation and the issues of the Reformed churches? History repeats itself and has done so also within the church. Let it not be said some day that the URC is destroyed for lack of knowledge.

Mr. Myron Rau is a member of Covenant URC in Kalamazoo, MI, where he has served as elder, and serves as President of the Board of Reformed Fellowship. He had served as chapter representative on the board of the former CCMCRCNA.