At the approach of my first Christmas season on the Island of Ceylon, I felt a close affinity with Irving Berlin, the famous song writer. I shall never forget the poignancy of the moment and the nostalgia that overcame me when I heard the first plaintive strains of the song Berlin wrote many years before: “I’m Dreaming of a White Christmas,” coming over the BBC network from England. Tears came to my eyes as I visualized icicles hanging from the eaves, lights twinkling on the snowy lawns and trees and glowing bright from the windows. Again I heard the snow squeak underfoot and the Salvation Army bells ring their cheery note. In memory I felt the crisp cold air, and I saw the smiling shoppers hurrying from store to store.

But there I was in Ceylon, far away from many of my loved ones. It was Christmas time, a time of happy memories; and nothing seemed the same. The old familiar patterns were not there.

I allowed myself a few more tears. They were the first and last ones I ever shed during the Christmas season in tropical Ceylon, for Christmas is truly a gala affair on that pearl of the Orient. It is celebrated with much gusto and gaiety and also with great sincerity. Moreover, the Christians in Ceylon celebrate the birth of the Christ Child with the same reverence as do Christians in every city and hamlet in America.

The Christmas season in Ceylon is far more than just Christmas. It is Easter; Fourth of July; Thanksgiving Day; New Year’s Day; spring housecleaning; and June, the month of brides, all wrapped up together with Christmas. Sad as I was with the thought of loved ones in distant America, I was literally swept into the spirit of celebration that filled the air. 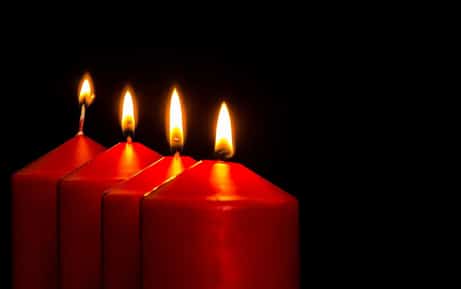 The first hint of Christmas came from the neighbors. Some, who otherwise never did the shopping, stepped forth from their porticos with baskets to do the special shopping for preserved fruit for the traditional Christmas cake. This delicious cake is always baked weeks ahead; and love cakes, made with rulang and unroasted cashew nuts, are also prepared. The buzz of sewing machines was heard from all sides, and soon I saw the blue cafe-type of curtains replaced by pink ones, or the pink curtains taken down to make room for blue ones. Lights burned late into the night, for the mistress of the home was embroidering a beautiful Queen-of-the-Night flower or a brilliantly colored peacock bird for a chair-back set. Linens were replaced by new ones or by very special ones used just for Christmas. The walls inside and outside the homes were being given a yellow-wash, and the cement floors were being polished a brilliant red or black. Everything had to he made new or scrubbed clean to celebrate properly the birthday of the Holy Child.

In Ceylon I found that weeks ahead of Christmas preparations for the programs and parties are made by the Sunday Schools and Guilds. Each society has its own special program and party. Lengths of cloth are bought for the mission children, and each Sunday School child receives a gift. Perhaps because of the English influence on the Island, the plays are always beautifully, artistically, and reverently presented. Formerly, at every party St. Nicholas would arrive by motorbike or helicopter. Today, in our churches, this custom has largely been replaced by the presentation of tableaux. Although only a few homes have Christmas trees (Ceylon does not have fir or pine) a scraggly juniper tree, festooned with balloons, is often placed on the church lawn during the Christmas week. Each congregation also has its own special service in the church in which carols are sung and verses from the Bible are read.

What surprised me more than anything else was the love of Christmas in a heathen land. The people of Ceylon take time to enjoy to the fullest this wonderful time of the year. Although the number of holidays has bee n decreased recently, formerly eleven days were proclaimed from December 23 through January 2 to be official government holidays. The newspapers of tl,e land always relinquish much of their space to delightful articles on Christmas customs and legends and also to articles in a more serious vein, entitled for example, “Don’t Forget Christ in Christmas,” or “Christmas in a Troubled World,” or “What Really Was the Star of Bethlehem?” All such articles are written by ministers of the gospel. The editorials in the newspapers enter also into the spirit. Wrote one editor: “…The world has hitched its wagon to the atom plant rather than to the Star which guided the Wise Men of the East. It is a comforting thought that the spirit of the Christmas Star can still shine forth at this time through thickening banks of radioactive cloud. To those who believe in Christmas it will never cease to shine.”

Christmas is formally ushered in by the distribution of many hampers of food and clothes to the poor of the parish and by the carolers going from home to home on Christmas Eve. No hastily gathered-together groups are these carolers. Weeks have been spent in decorating paper lanterns with Scripture verses and Christmas symbols. Carefully the coconut oil lamps are placed inside them, and then the lanterns are placed on decorated lamp posts. Still more carefully other lighted lanterns are carried from home to home to the delight of children and adults alike. Homes are often open all night to receive the Christmas carol parties. Pieces of Christmas cake, wrapped individually in tissue and tied with red ribbon, and barley water are served to the carolers. Then when the carolers leave, firecrackers are exploded to foretell the arrival of the singers at the next home. From every direction the lovely carols ring out. “Softly the Night is Sleeping,” “In a Manger Laid So Lowly,” “Like Silver Lamps in a Distant Clime,” are some of the unfamiliar ones that may be heard. These descriptive and melodious carols, sung in special church services and caroled from home to home, I miss more than anything else in our American Christmas.

We usually were able to snatch only a few hours of sleep on the night of December 24. Early Christmas morning firecrackers and dynamite in tins were exploded to such an extent that it was not safe to go down the main sheet. A rich raisin bread called “Bruder” would be eaten for Christmas breakfast, and then there would be the opening of the presents.

On Christmas morning the churches are packed with people. Tea planters and rubber estate owners and their families are in town for the holidays. Sons and daughters from all parts of the island are home to visit their parents. Those who never felt the need for the Christ Child during the year make a point of salving their consciences by coming to church on Christmas morning. The reunion of friends and relatives is an important part of the Christmas service. Each member greets the other with a kiss or a bow and a handshake and “felicitations of the season.” Not a person comes to church without a new outfit of clothes, for on Christmas Day and on New Year’s Day everyone wears a completely new outfit. In my ignorance, I did not wear a new outfit on either holiday; and I was reminded of the fact by more than one person.

After the service people go calling on their friends. I remember the leper whom we had visited in the leper colony and who now greeted us with a big smile, for that was his first Christmas in many years outside the colony; the small servant boy who came to deliver a special greeting from a church member; another servant boy who delivered a hand-painted Christmas card and a message from a young member; a neighbor who came with an extra cake, fearful we would run out; and American friends who joined us for Christmas dinner.

TYING OF THE KNOT

The days after Christmas the people continue to visit one another, and the traditional Christmas cake is eaten.

The streets and lanes are gay with color and activity as friends and relatives visit from one home to the other.

The week between Christmas and New Year’s Day is the time for many weddings. Since everyone has a new outfit or two, the weddings come at an advantageous time. Wedding anniversaries are also celebrated elaborately, for the Easterner loves a party. The padre performs the ceremonies and gives the homilies. At the anniversaries he offers prayer and reads Scripture. He is wanted everywhere at the same time.

USHERING IN THE NEW YEAR

On New Year’s Eve, at midnight, the worshippers come together in the house of God for the candlelight service of prayer, sermon, and song. The next night ends the Christmas season. On that night a minstrel show is presented. The actors go from home to home, giving the children an excuse to stay up later for just one more night.

In Ceylon I found that Christmas is Christmas wherever it is celebrated. Christmas for me, a stranger in Ceylon, in spite of the longing for loved ones far away, somehow brought me a bit closer to the blessed Christ Child—our Savior and Lord. In many respects, the patterns of celebration were different; but the same love of the Christ Child prevailed.