There was a time when articles on “church music” would be automatically bypassed by most laymen of the church because such a topic seemed to lie outside the area of their interest or understanding.

But times have changed. Many laymen of the church have been captive participants in worship services where a variety of unsettling, sometimes nightmarish music experiences have replaced the smooth Bible-based text and sturdy tunes which comprised their vehicles of praise in days past. Into many worship services have been introduced every thing from slick commercial arrangements of country and western tunes in jog-along rhythms, to twanging amplified guitars, to the frenzy of so-called “Christian” themes set to rock or jazz rhythms.

Suddenly many laymen find themselves groping—yes, even grasping desperately for some direction in the rootlessness passed off as relevancy. Not able to give a reasoned critique for the new modes, the laymen nevertheless express audibly what they feel intuitively, and that is, gross incongruity between the message of the Bible and the musical methods being used to convey it. At this point experts remind the layman of his inadequacy to judge and thus squash the argument by an appeal to the subjectivity of music so that what was “food for yesterday,” no longer speaks to “today,” and “Who can be the judge anyway of what is good?”

Is music a totally subjective art? Or are there basic elements put into its structure and operation by God which make one form more legitimate than another as a vehicle of praise to God?

Music is decidedly subjective. But all music, sacred or secular has three basic elements to which we can appeal for concrete standards of judgment: rhythm, melody and harmony which developed in history in that order. These three elements do affect the emotional life of man either for good or for ill. In any given musical composition, when melody is dominant, it expresses itself in song. If rhythm is dominant, it automatically calls forth a dance response. If harmony is dominant, the composition is expanded melody. This last form has been the most widely used in the traditional psalmody and hymnody of the church. 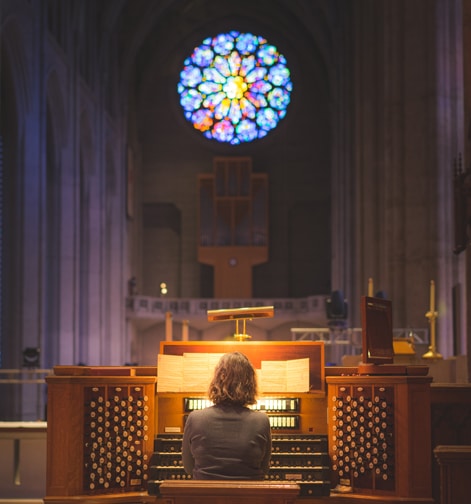 What we are seeing today is an accommodation of current folk tunes and styles to Christian themes. It is being justified on the grounds that because the Reformers adapted some folk tunes of their day to Christian themes we may do the same. But it is important to remember that in modern folk tunes, we find a mixed dominance. The rhythmic dominance is furnished by the bass, tenor and alto lines which generally progress together in half notes or whole notes, providing the regular, dance rhythm, slower and more casual than rock or jazz but a dance rhythm nonetheless. The melodic dominance is usually furnished by the soloist carrying the often syncopated melody, all alone. Because of this, it is never fair to compare today’s “Christian” use of folk music to the use made of folk tunes by the Reformers. Although the early Reformation musicians often used secular matter in their psalm tunes, their arrangements for congregational singing reflected solid moving parts without a trace of dance rhythm.

Jazz and rock (be it religious or otherwise) are basically highly exaggerated forms of the modem folk rhythms with faded and dissonant melodic lines, and rhythm heavily accented, syncopated and greatly accelerated. The accompanying dance is executed with violent bodily motions and gestures and wails. An honest appraisal will have to concede that any person performing or participating in a jazz performance will, by virtue of his own intense, sensual, emotional, self-centered and personal involvement, find any serious contemplation of God or any of His works or attributes a feat of mental gymnastics which is virtually impossible. One newspaper review admitted this when it described congregational response to a religious jazz service as “enthusiastic but shallow.”

Impressive predictions about the ability of folk, jazz and rock to communicate the gospel more effectively to today’s world have already paled to the point where its advocates are urging a mediate program for the worship service: a little “folk,” a little “rock,” a little “jazz” and a little “tradition,” a sort of musical “smorgasbord.” Such a proposal is inadequate for two reasons. First, it seeks to accommodate the music of the church to tastes of its members. It presupposes that such music is there to entertain rather than edify. Musical form becomes the object of praise, instead of the vehicle of praise, subordinate to and supportive of the all important Bible-based words.

Two principles, if scrupulously and conscientiously followed, will rescue some congregations from the web of confusion and restore order and harmony in the worship service:

1. The music of the church must fit the message of the church—its preludes and offertories as well as hymns. No artist dabs his brush in bright orange, red and green oils to paint a tree caught in a mid-winter snow storm. No organist plays “Stars and Stripes Forever” at a funeral, or the “Funeral March” at a wedding. No well-groomed gentleman will wear dinner jacket, bow tie and highly polished shoes with blue jeans. Why then set the miracle of the incarnation, the tender and compassionate love of the Father, the grandeur of His works and the mysteries of His attributes to raucous dissonance and frenzied rhythms where all sensitivity to words is necessarily “drowned out” instead of “buoyed”? The incongruity of it all is obvious.

2. The congregation, choirs and soloist must select music in which the tune is subordinate to and supportive of the text, never calling attention to itself. The music must magnify and adorn the Word. St. Augustine said in his Confessions:

I am inclined to approve the custom of singing in church. Nevertheless when it happens that I am more moved by the song than the thing which is sung, I confess that I sin in a manner deserving of punishment, and then I should rather not hear the singing.

Each chorister, soloist, instrumentalist and member of the congregation holds before him a staff upon which are inscribed little note-heads and bar lines which possess the power to lift the soul heavenward or wound and mutilate it. Careful discrimination rather than careless accommodation is the hallmark of very Christian musician who seeks to glorify God, edify His people, and testify of Him to the world.