Jesus ordained the Holy Supper with the short declaration, “This is my body.” He followed this statement with the equally succinct affirmation, “This is my blood” (Matthew 26:26, 28). The very simplicity of these statements along with the profundity of the realities proclaimed by the sacrament itself— accompanied by our human weakness and lack of spiritual perception—resulted in a lack of unanimity in the church concerning what the Lord actually meant. The significance of what Christ affirmed is still debated after two millennia.

Today, within the broader evangelical community in America, the dominant position is that of the Swiss Reformer Ulrich Zwingli. In his Sixty-Seven Articles (1523), he challenged all comers to debate the major doctrinal positions that he had preached in the city of Zurich. On the basis of Scripture, Zwingli staked out his position on what the Lord’s Table actually is. “Therefore we conclude,” he stated, “that the Mass is not a sacrifice but a memorial of the one sacrifice and a seal of redemption that Christ made good for us” (Art. 18). His denial of the sacrifice of the Mass, informed by his study in the Epistle to the Hebrews (7:27; 9:25–28; 10:10, 12, 14, 18), is a point with which all of Protestantism agreed. His conception that the Supper is both a memorial and a seal is certainly biblical biblical. Jesus himself declared with respect to eating the bread and drinking of the cup, “Do this in remembrance of me” (1 Corinthians 11:24–25). Likewise, the sacrament provides authentication and assurance of our redemption by Christ. The problem with the Zwinglian view (at least his teaching articulated in 1523) is that it does not say enough as to what the sacrament actually is. It is indeed a Supper of Remembrance, but it is far more than that. But how far should we go in describing the sacramental mystery? 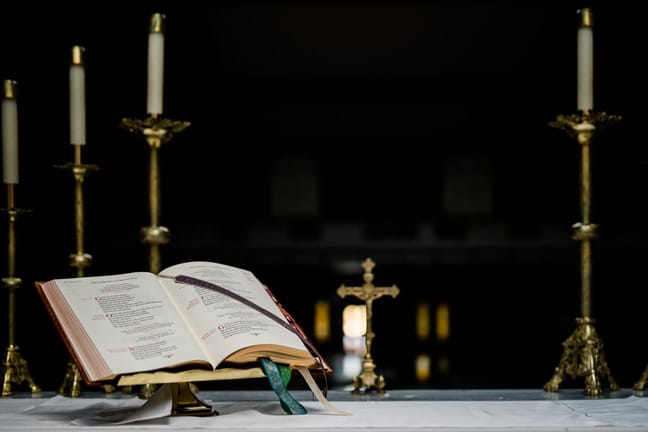 Roman Catholic theology, for example, offers the doctrine of transubstantiation—the miracle of a change in the substance of the bread and wine so that they become the very body and blood of Christ, even while their perceptible characteristics remain the same. This theory became church dogma at the Fourth Lateran Council (1215), and it was reaffirmed at the Council of Trent (1551) in response to the Protestant challenge in the Reformation. Trent declared, “In the august sacrament of the holy Eucharist, after the consecration of the bread and wine, our Lord JesusChrist, true God and man, is truly, really, and substantially contained under the species of those sensiblethings” (Thirteenth Session, Chap-ter I). The problem with this construction is quite simple—it stands without biblical support, and thus it must fall.

Equally problematic is the statement that “all our forefathers, as many as were in the true church of Christ, who have treated of this most holy Sacrament, have most openly professed, that our Redeemer instituted this so admirable a sacrament at the last supper” (Ibid.). This statement, quite frankly, lacks historical verification. Nine centuries had already come and gone before Paschasius Radbertus published his treatise on the Lord’s Supper which first suggested anything like the transubstantiation doctrine. Furthermore, major theologians in the thirteenth century rejected the doctrine. Duns Scotus and William of Ockham, for example, proposed the theory of consubstantiation—the idea that the substance of Christ’s body and blood are present with the substance of the bread and wine. Another theologian who dissented from the Fourth Lateran Council on this point was the Oxford professor John Wycliffe. Writing in Middle English—the same language used by Geoffrey Chaucer—Wyclif declared his denial of transubstantiation. In one sentence, he essentially answered three questions. First, what kind of thing is the Eucharistic bread, that is, the host? Wyclif stated, “This oost is verri breed in his kynde.” Secondly, what does the bread symbolize? Wyclif continued, “This oost is verri breed in his kynde, and in figure Goddis bodi, by vertue of Cristis wordis.” And finally, if we ask the first question once again, Wyclif essentially answered by way of negation: “But thus it is not of Cristis fleish and His blood in His kynde” (Sermons. The Saturdai Gospel in Fyfthe Weke in Lente. Emphasis added.).

The Eucharistic theology of Rome goes far beyond the statements of Holy Scripture. Martin Luther described transubstantiation as “a monstrous word and a monstrous idea” (The Babylonian Captivity of the Church). What then did Luther propose as an alternative to Zwingli who lost the full wonder of the sacrament, and what did he set forth in place of the Roman doctrine which transformed the Supper into some kind of magic? The position of Luther was well-stated in the Augsburg Confession (1530) written by his younger colleague Philip Melanchthon. Although the Emperor Charles V fell asleep while it was being read in his hearing, this fundamental confession of the Lutheran movement continues to be of great interest to students of Lutheran sacramental theology. Article X, on the Holy Supper, declares, “It is taught among us that the true body and blood of Christ are really present in the supper of our Lord under the form of bread and wine and are there distributed and received” (Emphasis added.). What Luther strenuously objected to were all attempts to “remove the body and blood of Christ from the bread and wine, so that it remains no more than mere bread, such as the baker bakes” (The Sacrament of the Body and Blood of Christ—Against the Fanatics. Emphasis added.). Here Luther neither affirmed transubstantiation (that the elements— their substance—change into the body and blood of Christ), nor consubstantiation (that the body and blood of Christ are present with the elements). Luther simply declared, “Christ’s body and blood are truly present in the bread and wine” (Ibid. Emphasis added.). The key issue for Luther was the preposition in.

The Problem with Luther

The problem with this position is that the Bible does not explicitly state that the body of Christ is in the bread. Nor does it clearly affirm that the blood of Christ is in the wine. It is interesting, however, that in the Bread of Life Discourse Jesus uses the preposition in—the context is his sacramental teaching that was anticipatory of the Holy Supper which he was going to give to the church. “He who eats my flesh and drinks my blood,” Jesus declared, “abides in me, and I in him (John 6:56). Rather than affirming that His flesh was in the bread or that His blood was in the wine, Christ explicitly stated that in the sacramental act He Himself would be in the believer. Thus, the Reformed community may sign on to most of the statement made in Article X of the Augsburg Confession: “It is taught among us that the true body and blood of Christ are really present in the supper of our Lord … and received.” In clinging tenaciously to the inspired biblical text, we must affirm that the phrase and the clause “under the form of bread and wine and are there distributed” say too much.

The Insight of Calvin

This then brings us to a key distinction between the Lutheran movement and the Reformed—more specifically, those who stand in the Calvinist tradition. While the teaching of Luther puts a certain focus upon the presence of Christ in the elements, the position of John Calvin draws our attention to the presence of Christ in the believer. This is a perspective which was captured by the nineteenth-century American theologian, John Nevin— who powerfully presented the doctrine of Calvin on what the Lord’s Supper actually is.

What is the wonder and mystery of what happens at the Lord’s Table? Is it that the elements inwardly change into Christ, or that Christ himself is in the elements? In one sentence, Nevin describes what is supernatural about the sacrament: “The body of Christ is in heaven, the believer on earth; but by the power of the Holy Ghost, nevertheless, the obstacle of such vast local distance is fully overcome, so that in the sacramental act, while the outward symbols are received in outward way, the very body and blood of Christ are at the same time inwardly and supernaturally communicated to the worthy receiver, for the real nourishment of his new life” (The Mystical Presence).

The Doctrine of Paul

This statement is a faithful reflection of the teaching of Paul—who has much more than a mere memorialist view on the Lord’s Supper. On the one hand, as Nevin put it, “the outward symbols are received in an outward way.” This indeed is what Paul says, “We all partake of the one bread” (1 Corinthians 10:17). This, however, is not the only thing that happens in the Supper! Nevin accurately captured the Pauline emphasis when he stated that “in the sacramental act … the very body and blood of Christ are … inwardly and supernaturally communicated to the worthy receiver.” It is this very mystery that Paul calls to our attention in 1 Corinthians 10:16 as he asks two questions: “Is not the cup of blessing which we bless a sharing in the blood of Christ? Is not the bread which we break a sharing in the body of Christ? Here the word koinonia refers to the fact that believers participate together in the reception of Christ—including even the taking in of his humanity, indeed His body and His blood, at the Table of the Lord. Thus, we concur wholeheartedly with Luther when he answered the question as to what the believer has in his heart.

“You must answer that you have the true Christ,” Luther wrote. He then acknowledged, “How that comes about you cannot know, but your heart truly feels His presence, and through the experience of faith you know for a certainty that He is there” (The Sacrament of the Body and Blood of Christ— Against the Fanatics). This indeed is the high privilege of our coming to the holy sacrament—it is a means of grace, providing the unspeakable opportunity of receiving Christ himself at the banquet of the Lord.