In 2006, URC missionary Neal Hegeman was deported from Cuba for preaching without a government-approved license. At the time, he served as the MINTS coordinator for Cuba. When he left, 121 students were studying MINTS courses on a weekly basis. He asked master’s level students to continue the program in his absence.

Two coordinators who took over MINTS-Cuba responsibilities were particularly instrumental in growing the program. J. S. in Camaguey organized MINTS classes among Pentecostal students. His denomination, the Assemblies of God, voiced concern about his Reformed teachings and tried to stop the program, but as one participating pastor stated, “What is of God cannot be stopped.” The program grew to more than five hundred students.

That’s when Dr. Nolberto Quezada, the second coordinator, stepped in. Dr. Quezada is the president of Los Pinos Nuevos Seminary. He completed his doctor of ministry degree with MINTS and then went on to complete his PhD, which involved writing a plan to extend MINTS-like studies throughout Cuba. In 2013, he implemented his plan and signed up seven thousand students, members of house churches scattered throughout Cuba. They established twenty­seven teacher training centers in various parts of the country. In 2014, he signed up an additional three thousand house church members. 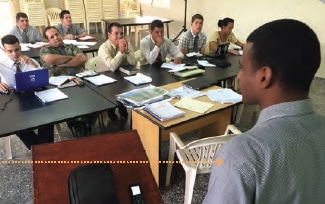 In Cuba, house churches are the norm. The Cuban government does not give permits to build churches, so Cuban Christians work with what they have. They use the largest space available, which is often a garage. When the garage is full, it’s time to start a new church. Dr. Quesada estimates that Cuban Christians have established more than fifty thousand house churches on the island.

When asked what factors contributed to the phenomenal growth, Dr. Hegeman gives several reasons. “God is sovereign over the nations,” he says. “He took the decree to forbid the building of new churches, to force churches to meet in homes. The restriction to thirty people in a meeting forced churches to multiply to other homes. Each home church needs leaders, hence leadership multiplied.”

“But there are more reasons,” he says. “The Bible is widely distributed and studied in small house churches. Faithful Cuban leaders sacrifice a great deal to evangelize and to set up house churches. Pastors, elders, and church members preach. Preaching to the unconverted is still God’s method for evangelism.” God even uses socialism to grow the church. “Since Cuba is heavily socialized, people are forced to depend on the government for their 20 to 25 dollars per month salary. There is little incentive to work. Hence, Christians have a lot of time to visit, evangelize, and study.” Computers also play a role. “MINTS has 16GB USB drives with more than four thousand Spanish theological books and over one hundred MINTS courses. If students share computers that are brought in, they can read and study.”

Dr. Hegeman continues to assist with the work in Cuba even though he is no longer personally able to enter the country. He does not plan to return to Cuba without a religious visa, something the Cuban government, up to this point, has not granted. However, he does correct master’s and doctoral-level manuscripts. He also helps organize trips for visiting teachers.

On one such trip, the visiting teacher preached in a house church. The garage where the church met was filled to capacity. Others stood out on the street looking through the side door. The temperature inside was ten degrees warmer than outside, but everyone—inside and outside—rejoiced to worship the Lord.

The visiting teacher also taught a class for MINTS students. Later, one of the students wrote a note summarizing his experience as a Christian in Cuba: “As you can see we are poor but rich, prisoners on our own island, but free in the Spirit, without resources but we share what we have with those in need. God has blessed us greatly at our seminary, and I believe we are preparing ourselves well theologically and spiritually.”

“The Cuban experience is a lesson in God’s sovereignty,” says Dr. Hegeman. God used what we would consider oppressive circumstances to build his church. He is now worshiped in Cuba in house after house after house.

Norlan De Groot is the English Communications Coordinator for MINTS International Seminary. He is an elder at Redeemer United Reformed Church in Orange City, IA.