May 20 marked Mid-America Reformed Seminary’s 20th Annual Commencement. It also marked a couple of firsts for Mid-America. Brian Busker was the Seminary’s first graduate from its new Master of Theological Studies program, and Paul Berghaus was the Seminary’s first graduate to be ordained as a chaplain in the United States military. Other men receiving Master of Divinity degrees were: Spencer Aalsburg, Greg Bylsma, Christopher Folkerts, James Sinke, Jason Stewart, Matthew Timmons, and Talman Wagenmaker. Additional causes for celebration were Professor J. Mark Beach’s reception of his Ph.D. the same weekend and the recent notification that the Seminary had received accreditation status from Transnational Association of Colleges and Schools (TRACS). 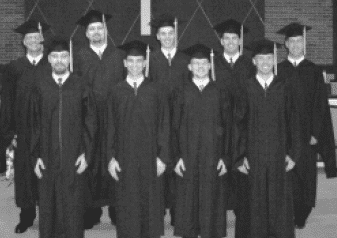 Rev. Fred E. Folkerts, pastor of Immanuel URC in Listowel, ON, was the commencement speaker. He is not only an alumnus and former Board member, but he is also the father of graduate Chris Folkerts and one of last year’s graduate, James Folkerts.

Choosing Malachi 2:1–9 as his text, Rev. Folkerts spoke on the topic: “For he is a messenger of the Lord of Hosts.” He urged graduates to be zealous in bringing God’s Word as messengers of the Lord of Hosts. “Brothers,” he said, “this is to describe your commitment, your character, and your task. The law of truth must be in your mouth and the love of truth must be in your heart.” Rev. Folkerts spoke about the huge responsibility these graduates face, reminding them that “the failure of a church always begins with the failure of its ministers.” He added, “But we know God’s grace, and if you are committed, God will surely honor that commitment.”

He encouraged graduates to “preach the whole counsel of God” since it is “the Lord who called you” and “the Lord Jesus who also died for you.” He asked, “What do people really need?” and then said, “It makes no difference what their age; their deepest need is to be confronted in their heart of hearts with the majesty and the grace of the Holy God.

He went on to say that God’s holy messengers must convey that message with a spirit and a heart of reverence. “You must pray much for God’s grace and this reverence,” he said. “If your ministry is not characterized by this humble spirit, your ministry will go off track. It will fail in terms of content, purpose, and effect. You must have the spirit of reverence that is to mark your holy calling as messengers of the Lord of Hosts.” He exhorted graduates to remember “Who it is who called you” and “what He’s asked you to be.” Then “people will find God’s law in your mouth and hear it from your lips.”

Rev. Arthur Besteman, President of the Board of Trustees, presented the eight Master of Divinity degrees and the Master of Theological Studies degree.

Professor J. Mark Beach read 2 Timothy 2:1–13 and began his charge to the graduates by admitting, “All the faculty feel like papas who send their sons off to war.” He noted the command to “be strong in the grace that is in Christ Jesus” is striking because we don’t normally talk about being strong in grace. But we must be “willing and ready” to suffer for our Savior. Drawing a parallel between Captain Paul Berghaus’ understanding of military obedience to a commanding officer, Professor Beach said, “You answer to the Lord and Savior of the Church. Work hard for your commanding officer–for your Savior-and you’ll be the first to receive the blessings and the benefits.”

Professor Beach also noted how it seems “funny” that the text commands us to “remember” Jesus Christ. He observed how easy it is to remember many other things, such as our failings or our inadequacies, but also how tempted we are to remember compliments and accomplishments. “But remember who you are,” he urged, “how easily sin beckons. Lust is at the door; pride is like a snake ready to strike. Your very gifts are where you’re most vulnerable.” He reminded graduates to remember that “Jesus is the content and the center of it all” when confronted with the struggles of the ministry. “Every broken, lonely soul in your church needs Him,” he said. “And I want you to understand–so do you.”

Dr. Nelson Kloosterman led the audience in a commencement litany. Professor Mark Vander Hart led the recitation of the Apostles’ Creed, and Professor Alan Strange asked for God’s blessing as the ceremony concluded. The congregation sang, “Lead on, O King Eternal” as the graduates exited. Family and friends gathered for a time of fellowship following the ceremony.