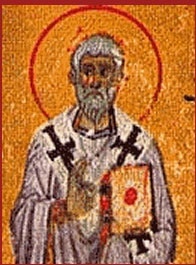 It was first discovered in the 1930’s (Michigan-Beatty Papyrus) and initially published in 1940. Melito’s (MEL-e-toe) Paschal Homily (or “Sermon on the Passover“) is regarded by many as the most stunning patristic discovery of the 20th century. Save for fragments, the homily was not extant in ancient collections of Melito’s works. Yet providentially, another version (Papyrus Bodmer XIII) was discovered and published in 1960. A newly found Coptic manuscript of the sermon (Mississippi Coptic Codex I) remains to be edited and translated. For the first time, scholars and students of the early church have access to the full text of a sermon from the bishop of Sardis in Asia Minor (died about 190 A.D.). The homily may have been delivered between 160 and 170 A.D.

The homily/sermon astonishes us with its poetic beauty, its rhetorical power, its theological depth, its majestic sweep of redemptive history. And in every aspect of its marvelous richness, Melito directs the hearer/reader to Christ as the eschatological Lamb and Passover of God. (An English translation of the homily is available free of charge at kerux.com.)

For God replaced the lamb,

And a man the sheep;

Melito’s biography is obscure. He labored in Asia Minor which today is modern Turkey. There he was episcopal leader of the church in Sardis (cf. Revelation 3:1–6). His discussion of the date for Easter (so-called Quartodeciman controversy); his so-called Apology (addressed to the emperor Marcus Aurelius); and his list of the canonical books of the Old Testament (authenticated by a pilgrimage to Jerusalem in which Melito becomes the first Christian writer to call the Hebrew Bible the “old covenant”; his list of inspired books agrees with the Hebrew/Protestant canon, though he omits Esther (or perhaps combines her with Ezra and Nehemiah): all have made him an historical and patristic curiosity. But there, tantalizingly, our knowledge stops. Melito’s biography remains obscure.

The mystery of the Passover is New and old, Eternal and temporal, Corruptible and incorruptible, Mortal and immortal (2).

But the Paschal Homily is not obscure. It is a magnificent example of Christian preaching in the second half of the second century A.D. While Melito’s method may be labeled “typological” or “promise-fulfillment”, the richness and profundity of his insights are more organic, more transcendentely revelational as well as immanently incarnational. Some scholars have labeled the sermonheilsgeschichtlich (“salvation historical”). I prefer the label redemptive-historical or biblical-theological.

I am the Christ. I am your forgiveness, I am the Passover of your salvation, I am the lamb which was sacrificed for you, I am your ransom, I am your light, I am your savior, I am your resurrection, I am your king, I am leading you up to the heights of heaven, I will show you the Eternal Father, I will raise you up by my right hand (103).

Melito lays out his method and direction in the introduction (1–10), i.e., the relationship between the old (former covenant; Exodus Passover) and the new (last days covenant; crucifixion of Christ). He then explains the Passover in Egypt in its historical context (11–33), i.e., the slaughter of the lamb and the sentence of death upon the land from which Israel was ransomed by the blood of a substitute. Next, he constructs the shadow-type/reality-antitype paradigm, relating the Old Testament event to the New Testament fulfillment (34–45), i.e., the history of Israel in Egypt is an anticipation of the history of Jesus in Palestine, while the history of Jesus in Palestine is a recapitulation of the history of Israel in Egypt. Now, he relates the Passover in Egypt to the wider context of God’s grace in history from the Fall of Adam down to Christ (46-65), i.e., the redemptive history from Genesis to Malachi is accomplished in the redemptive history of Jesus Christ (Matthew to Revelation). The homily draws to a close with the shift in God’s plan of salvation from Jew to Jew and Gentile (66–99), i.e., from old Israel (Abraham and those in him, according to the flesh) to new Israel (Christ and those in him, according to the Spirit). A doxology of triumph in Christ concludes the homily (100–105).

This is the one who made the heaven and the earth, And who in the beginning created man, Who was proclaimed through the law and the prophets, Who became human via the virgin, Who was hanged upon a tree, Who was buried in the earth, Who was resurrected from the dead, And who ascended to the heights of heaven, Who sits at the right hand of the Father, Who has authority to judge and save everything,

Through whom the Father created everything

From the beginning of the world to the end of the age.

This is the alpha and the omega.

This is the beginning and the end.

This is the Christ.

This is the king.

This is the Lord.

This is the one who rose up from the dead.

This is the one who sits at the right hand of the Father.

To whom be the glory

And the power forever. Amen

At only one place do we cringe at Melito’s language. When he suggests that the Jews were the “killers” of Christ (“Israel admits, I killed the Lord” [74]). We shrink from the apparent anti-Semitism. Most scholars believe Melito is guilty of the racist charge. But perhaps the rhetoric of this passionate bishop is no more “anti-Semitic” than the language of the gospel of John or the speech of Stephen (Acts 7) or even the invectives of the Old Testament prophets. Perhaps Melito regards himself as a prophetic voice, charging Israel with grievous sin, so that they may be “cut to the quick” (cf. Acts 2:37), repent and cry out, “O Paschal Lamb of God, we hide under the blood of your cross – your once-for-all sacrifice – that eternal death may hide its dark face from us forever.”

The second century bishop of Sardis has drawn us into the drama and meaning of the Passover by drawing us into the drama and meaning of the last lamb for sinners slain. With that second century audience, we plead, “O Lord, cover us with the blood of this Eschatological Passover Lamb.” With that church in Sardis, we pray, “O dying Lamb of God, we lay our life in Thee so that Thy life – Thy resurrection-life – may be laid upon us.” With the saints of second century western Asia Minor, we plead, “O Lord, let our eyes be opened to the incarnation of Thy Son in the type, so that we may enjoy the adoption of sons in the antitype—the Incarnate Son.”

Melito’s sermon is a superb example of dramatic, passionate, Christ-centered patristic preaching. It reminds us even today that our preaching (and believing) can be no less!