1997 marks the 500th anniversary of the birth of Philip Melanchthon. Philip was Luther’s right-hand man, trusted and loved by Luther. He was 14 years younger than Luther, but was with him from the beginning in the reforming work that Luther led from the university and the pulpit of Wittenberg. 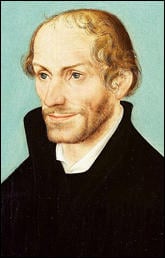 Melanchthon was so brilliant that Luther fully expected that in time he would replace Luther as the leader of the reform. And Philip’s contributions to the Reformation were of immense importance. He wrote the first systematic theology of the Reformation, his Commonplaces, which first appeared in 1521, and went through many later editions. He also wrote the Augsburg Confession, the foundational confession of orthodox Lutheranism. He prepared the Apology for the Augsburg Confession which he with others presented to the Emperor Charles V at the Diet of Augsburg in 1530.

Melanchthon was involved in many of the leading events of the early Reformation. He was with Luther in Leipzig in 1519 when Luther first began to articulate the doctrine of Scripture alone as the authority for Christian truth. He tried to lead the reform movement in Wittenberg in 1521 while Luther was in hiding in the Wartburg. He accompanied Luther to Marburg where they discussed the Lord’s Supper with Ulrich Zwingli of Zurich and Martin Bucer of Strassburg. He became a friend of Calvin at some meetings and they carried on a correspondence with each other over many years.

The potential of Philip’s early years was not fully realized later. He proved to be too timid to lead the reforming work as Luther had anticipated. For Lutherans he was suspect because he was willing to agree substantially with Calvin on the Lord’s Supper and because he compromised to some extent with  the edicts of the Roman Catholic emperor in 1548. For Lutherans and Calvinists he was suspect because he seemed later in his life to give a greater role in conversion to the human will than had Luther. Many were disappointed with him that he gave his later life more to educational reform than to theology.

Still Melanchthon was a brilliant and profound theologian. On this significant anniversary of his birth it is appropriate to remember something of his achievement as a great reformer. One scholar, Ernst Bizer, has summarized Melanchthon’s theology as a “theology of the promise.” And indeed the promises of God in Christ stand at the very heart of his religion. We can see something of the powerful insights of his theology in the quotations which follow.

Like Luther Melanchthon knew the horrible fear of the conscience awakened to the reality of sin and needing good news from God:

Those whom conscience has terrified in this manner would most surely be driven to despair, the usual condition of the condemned, if they were not lifted up and encouraged by the promise of the grace and mercy of God, commonly called the gospel. If the afflicted conscience believes the promise of grace in Christ, it is resuscitated and quickened by faith…1

For Philip the heart of the Gospel was in the certainty of the promise of God and in the confidence of faith:

In order that it may be certain, the promise was sent out, and God commands that we believe and assent to the promise and declare that it pertains to us. It is necessary to confess that this is the true and perpetual meaning of the Gospel…Therefore when we say that faith lays hold of the benefits of Christ, it is necessary to understand that people lay hold of them because of Christ, and they must assent to the divine promise and believe that the promises are truly given for us. Faith does not signify merely a knowledge of history, but trust in the promised mercy because of Christ, giving assent to the divine promise. Paul calls for the kind of faith which believes all the articles of the Creed, particularly that because Christ suffered and rose again remission of sins is given to us.2

Melanchthon stressed that true faith rested in the promises of God:

This teaching about faith he called “the chief article in the Christian life.”4 Melanchthon testified to the centrality of the Scriptures for faith, the Scriptures which always confront sinners with the law and the Gospel:

For what is the difference between these and the condemned? What, therefore, is faith? It is constantly to assent to every word of God; this cannot take place unless the Spirit of God renews and illuminates our hearts. Further, the Word of God is both law and gospel. To the law threats are joined. Scripture calls that by which man believes those threats ‘fear: and calls that by which he trusts the gospel or divine promises ‘faith.’5

Faith justifies the believer because it rests in the promised imputation of Christ’s righteousness:

The way of speaking in Paul must be observed, where faith signifies confidence in the mercy promised because of Christ. When he mentions the righteousness of faith, he understands a righteousness which is imputed through mercy.6

Melanchthon’s emphasis on the confidence of faith did not mean that the believer was delivered from all difficulties. Rather faith must always be active and growing:

Faith is not idle knowledge, but needs to grow through constant battle, through calling on God, in all pursuits and dangers. May this always shine in our hearts—that God is propitious to us on account of Christ, the Mediator, and that he will help. And let us call upon him in this faith and ask him to guide us in all undertakings and dangers. In this way, faith and true knowledge of God will increase in the hearts of the godly.7

Philip summarized his convictions on promise and faith in these powerful words:

And when we mention faith let the mind look upon Christ and think of the gratuitous mercy promised because of him. You are to say that you are accounted just not on account of any virtues or actions of yours, but on account of something outside of ourselves, namely, on account of Christ, the Mediator, who sits at the right hand of the Father, making intercession for us. This impulse of faith in our minds is not an idle cogitation, but it wrestles with the terrors of sin and death. It fights with the devil, who attacks weak minds in dreadful ways in order to drive them either to contempt of God or to despair, like Cain, Saul, Judas and innumerable others who decided that they had been rejected by God and so hated God furiously Others become atheists or Epicureans when they despise the Word of God and divine comfort in great troubles. They do not sustain themselves by faith, but broken in mind they yield to the devil, as wicked people clamor when things are against them: ‘Surely there are no gods, since the world is being ruined by blind chance.’ But those who hear the Gospel—who know that the works of God are to lead into hell and to lead back out-sustain themselves in such a struggle by faith. They flee to their leader, Christ. They know that he is the victor, who crushes the head of the serpent [Gen. 3:15], or, as is said elsewhere, who destroys the works of the devil [I John 38], and who has always been with his own from the beginning. Therefore, helped by the Son of God, they overcome the devil and do not depart from God.

For that is what the fight is about. The devil urges minds to fall away from God. Faith, on the contrary, fights lest it lose God, lest it be torn away from God. It declares that there is a God who, although he punishes, never the less adds the gratuitous promise of mercy on account of his Son. He gave his Son as our advocate and promised eternal salvation. God is seen in his Word, and when the mind looks upon the Word, its faith is strengthened. It does not fall away from God, but acknowledging his mercy, it calls upon him, expects liberation, and submits to the will of God. It does not permit itself to be torn away from him. And praise for the victory belongs to Christ, who helps his own, as he himself says: Without me you can do nothing’ [John 15:5]

Those who experience these things in life and in invocation [worship] are able to understand the doctrine of faith, and at the same time to make the distinction that though we are just, i.e. accepted because of Christ, faith meanwhile must nevertheless be increased in us which is true acknowledgment of God, and cannot be retained without a very sharp struggle.8

Melanchthon like Luther treasured this Bibilical teaching because it brought such comfort to the soul. In his words we can feel and rejoice in the blessing and peace of the true doctrine of justification:

Although this teaching is held in great contempt among untried people, yet it is a matter of experience that weak and terrified consciences find it most comforting and salutary. The conscience cannot come to rest and peace through works, but only through faith, that is, when it is assured and knows that for Christ’s sake it has a gracious God, as Paul says in Rom. 5:1, ‘Since we are justified by faith, we have peace with God.’9

Look at the promise of God’s mercy, and with confidence in him do not doubt at all that you have a Father in heaven, not a Judge….You now have the way in which Scripture uses the word ‘faith’; it means to trust in the gracious mercy of God without any respect to our works, whether they be good or bad. For we all receive of the fullness of Christ. Those who so trust now really assent to every word of God, both to the threats and the promises of divine history. 10

I have repeated these things because it is very important that this exclusive word be diligently explained, so that the distinction between Law and Gospel will be clearly seen, and so pious minds may think that a firm comfort has been set before them and may be aroused to faith and prayer in all troubles and dangers. For this faith must be exercised in daily difficulties…Therefore faith signifies not only knowledge of history, but trust in the mercy promised because of Christ, or assent to the promise of grace.11

Melanchthon’s life and theology were not perfect. But then no theologian’s ever are. In spite of his weaknesses and failures we must still appreciate the insight and strength of his work. His expression of the theology of promise remains a great heritage of the church—something to be appreciated and appropriated in our time.