Resolutely Karen opened the door to the morgue. As private investigator it was her job to have a look at the bodies of murdered clients. This case boggled her. She had not been aware of any threats against Howard’s life. That made her trip to the clinic of death all the more pressing. Weighing possible motives and clues, she slowly entered the cold room.

Suddenly the hollow clatter of footsteps resounded in the black-and-white-tiled hallway. Before she was able to turn around, two strong arms grabbed her, in an awkward embrace. “Good morning, Miss Evans,” a husky woman’s voice greeted her. “How nice of you to drop by. Howie always spoke highly of you. He had great confidence in you. I am Rose, his oldest sister.” Freed from the tight grip, Karen sized up the tall, muscular woman. She did not detect any obvious resemblance with the deceased brother.

Together the two women walked over to the gurney. The silent corpse was unwilling to communicate any revealing facts. Karen expressed her complete bewilderment about the unexpected murder. After promising Rose to stay in touch with her, she left. The mournful sister closed the door behind the detective and quickly walked to the window. She kept an observant eye on the road. As soon as Karen’s car had merged with the busy traffic, she put her hand inside her blouse. Groping to find the thin rubber edge, she took hold of it and started to roll up her deceptive feminine skin. From the chin upward the rumpled face of a man appeared. The crackling laugh that emerged from his throat increased the tangible morbidity of the room. “The case of the misplaced confidence,” he pronounced with foul disdain. His departure restored the peace that belongs to the dead.

All wives and husbands and friends and colleagues of the world would wish that masks could be removed so easily, quickly and painlessly. A real-life mask can be so perfectly applied, that the wearer is not even aware of it. The adopted persona becomes second nature. Even children will quickly learn the skill of hiding what really goes on. Parents can judge their child’s intentions from the face which he is wearing. But as children gain expertise in disguise, they increase their ability to fool their parents and siblings, their teachers and peers. As a matter of fact, it is often in the years of youth that some basic masks are shaped. By the time adulthood is reached, the assumed features might have all but permanently erased the natural traits. 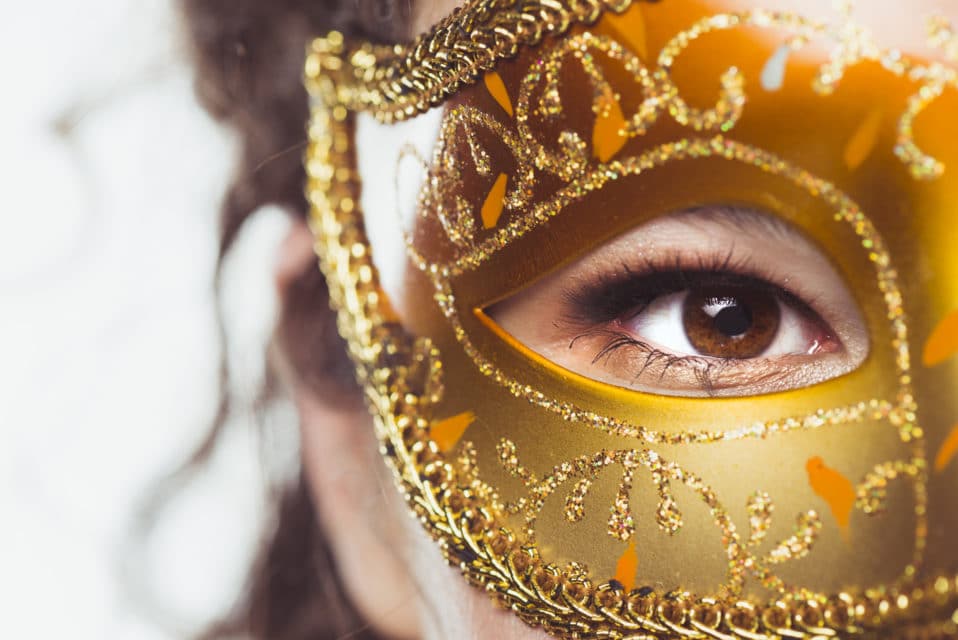 Every one puts on a disguise at one time or other. It is so convenient to hide your true feelings and convictions behind a mask. Pretense can be the first line of defense in protecting oneself. When an attack is suspected, we instinctively put our visor down. Out of fear that our opinion will not be appreciated, or that our emotions will not be understood, we hide. Putting on a mask is better than losing your face. Were we active in creating our disguise, we might become passive when the mask gets to work. Once applied, masks display the tendency to take on their role independently. Still seemingly conveying magical powers, they can acquire a life of their own.

Let us first consider a fairly innocent example. Teachers must control their classes. No one will dare to question that. An effective tool for classroom management is a stern face. It indicates to all that theteacher expects immediate and unconditional obedience. At the sametime it puts the teacher in the right mind-set for control. The stern look helps him to concentrate on the jobat hand and prevents him from thinking about the weeds in his vegetable garden, the pending visit ofhis mother-in-law or his holidayplans. It would be ludicrous to suggest that teachers cultivate their control face. They know that thelook of strictness is neither suitablenor necessary for shopping, visitingand wallpapering. Yet, the teacher’s  features might become so ingrained on the face, that some classroom managers (male or female) develop that stereotyped professional educator mask which they may even wear in the shower.

A second scenario takes it a little farther. There are people who think the only way to be accepted is to act cool. You must indicate to the world that you know what you want, that you are not scared of anybody or anything, and that you can force others to do things for you. This trend may already start at a youthful age. A youngster demands to ride the neighbor boy’s bike, and possibly return it in damaged condition. A girl decides that her group may have no further dealings with that timid female who wears green sneakers in PE class. A teenager, at the wheel of a car packed with admiring pals, mouths off a police officer for slapping him or her, With a speeding ticket. These types of people need a firmly affixed mask that expresses power, haughtiness, confidence and indifference. They develop a face with the chin tilted a bit, the eyelids slightly dropped, the eyebrows somewhat raised and one corner of the mouth curved down. “Watch out for me,” the mask cries out. But underneath that powerful mask hides an individual who wants to be loved and who longs for true friends. Ironically, his disguise blocks all signals which would convey these needs. And so he is stuck with his mask, as his mask is stuck to him. His pretense makes it difficult for him to earn someone’s respect, to get a job, or attract real friends. His put-on face has become a factor in determining how he feels about himself and how he acts toward others.

Masks come in many different sizes and shapes. Some people have a cupboard full of them.

Intuitively they select the one that looks best for the occasion at hand. They wear a grumpy front at breakfast, paste on the smiley face in the city bus, put on the flirting look for the opposite sex, save the professional presentation for the office, even have a very special pose for church.

Up to a point it is to be expected that we do not always look the same. A lawyer defending his client in court keeps his more jovial expression for dinnertime with his family. The key is that we do not cultivate a mask as a barrier to hide our inner struggles and confusion, our real thoughts and feelings. A mask should not become a crutch, which we need to face the world. If warning light should go on, when we experience a sense of embarrassment about wearing the wrong mask at an unexpected change of circumstance. A woman engaged in a heart-to-heart conversation with a friend, should not be thrown off by the unexpected arrival of her husband. A man showing his new car to his buddies, should not feel inhibited if his wife joins the ritual of tire-kicking and under the-hood-looking.

It is not easy to get rid of a stubborn mask. Because we have become so accustomed to the face we made, we consider it part of ourselves. We become the role we chose. This predicament prevents us from grasping the mask and tearing it off. We don’t even know where we stop and where the veneer begins. It is a long process: realizing that you hide behind a mask, collecting the courage and perseverance to take it off, and detecting who you really are. A friend can help. But it must be a good and loyal friend. Mask removal can be a painful process which the masked person will most likely initially resist. It becomes even more difficult when the disguise covered up a sinful condition or tendency.

Once the face is freed from the mask, the real person becomes visible. If the eyes are the mirror of the soul, the face is the frame that complements the portrait. A troubled soul will be reflected as a troubled face. A caring heart will show up as soft eyes and a friendly mouth. A critical mind set will portray itself as an impression of sternness. Facial beauty is not determined by jawbone structure or nose design. It comes from the inside out. Whatever motivates us—it shows.

That brings us to a compelling question. Does our faith show? Is our confidence visible on our face? Can we be recognized as Christians? It might be helpful to examine first whether we, as children of God, are able to identify a brother or sister. Can we pick out a fellow believer? It is relatively easy when Christians adhere to a dress code. In certain groups the women dress in skirts and have their hair long; the men are bearded and possibly wear hats. However, many Christians have not taken their separation from the world to that extent. They dress according to fashion, be it in different degrees. incidentally, this absence of a dress code emphasizes the relevance of facial expressions. Have you ever recognized a stranger to be a fellow-believer? Did you ever have a hunch he or she might be? On what subtle clues did you base your assumption?

Christians may be scarred by sorrow, which shows. They may be burdened with physical pain, which shows. They could even be very afraid of something, which shows. Yet, these expressions are softened by a glow of inner strength, a radiance of intimate love. The face is open. The mouth may reflect pain, but is not defiant. Though there is fear, there is also acceptance. The eyes might mirror grief, yet they are gentle. A wholesome sense of humor has engraved its pleasant lines. Christians do have distinct, recognizable facial features. And sooner or later their speech will add the convincing evidence.

May our faces freely and openly reflect a soul that loves the Lord.