1996 marks the 450th anniversary of the death of Martin Luther. The pioneering reformer breathed his last on February 18, 1546. He was 62 years old. 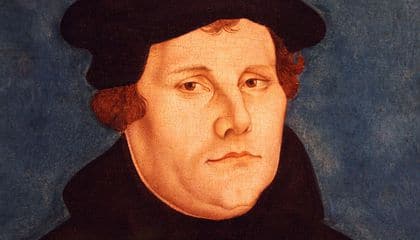 Luther’s last word was a convinced “Yes” to the question put to him by one of his pastors and spiritual counselors, “Reverend father, do you wish to die standing up for Christ and the teaching that you have preached?” Not long afterward he quietly and without pain died in the Lord.

The steadfastness of his faith and the peacefulness of his death were carefully recorded for posterity. Many in the sixteenth century believed that the demons came for heretics at their death and that their eternal suffering was presaged by agony in dying. The Roman church also sometimes claimed the death-bed conversion of those who opposed it. None of that could be said of Luther.

Luther died in the city of Eisleben only a few blocks from the house in which he had been born. He had traveled there even though his health was weak, to try to reconcile serious differences among friends. As he weakened there he felt that his life had come full circle and that it was appropriate that he should die where he was born.

Martin Luther was a remarkable worker for the Lord. He translated the entire Bible into German. He wrote poetry for hymns and composed the tunes. He advised the great and comforted the weak. He wrote great theological treatises and commented with great spiritual insight on books of the Bible. But he probably saw himself primarily as a preacher.

He preached his last sermon in Eisleben only three days before his death.1 The text for the day was Matthew 11:25, “…Jesus said, ‘I praise you, Father, Lord of heaven and earth, because you have hidden these things from the wise and learned, and revealed them to little children.’” This text allowed Luther to return to one of the favorite themes of his ministry, namely the surprising way in which God exercises His power among His people.

God, amazingly, wants His people to listen to His Word and He blesses His people through that Word. “Therefore Christ says, ‘All things have been delivered to me,’ that is, to me you must be obedient. If you have my Word, then stick to it, and pay no attention to anybody who teaches and commands you differently. I will rule, protect, and save you well.”

Little children understand that they must listen to God’s Word, Luther contended, but the wise and powerful do not: “This is the first point of this Gospel—that Christ and God the Father himself are opposed to the wise and understanding. For they vex him greatly; they mangle the sacrament and the church, and set themselves up in God’s place and want themselves to be masters.” Further, “everything that God does they must improve, so that there is no poorer, more insignificant and despised disciple on earth than God; he must be everybody’s pupil, everybody wants to be his teacher and preceptor.”

For Luther these wise and self-sufficient folk must have the law as a hammer preached to them so that they may be shaken from their smugness and indifference to God and His Word. The warnings of God’s judgment on those who would improve on God’s way of doing things must be clear. Only then can people really hear and believe the comforting words of the Gospel that Jesus “gave himself, body and life, for us.”

The chief offense of the wise in their improvement on the ways of God is their neglect of preaching and the sacraments. The power of God works through those ordinary and apparently weak instruments of the shouted word (preaching) and the visible word (sacraments). Children understand this, but the wise despise it. “…when Christ established and instituted the preaching office and the sacrament of his body and blood in order that Christians should use it to strengthen and fortify their faith, the pope cried: No, that’s not the way it should be; it must be wisely handled!” So the pope gave the church more sacraments and images and monasteries and fastings and good works and pilgrimages to improve on the simplicity of the Word of God.

In a statement that is really vintage Luther, we can see his lament for the foolishness of people in their efforts to be wise:

In times past we would have run to the ends of the world if we had known of a place where we could have heard God speak. But now that we hear this every day in sermons, indeed, now that all books are full of it, we do not see this happening. You hear at home in your house, father and mother and children sing and speak of it, the preacher speaks of it in the parish church—you ought to lift up your hands and rejoice that we have been given the honor of hearing God speaking to us through his Word.

Oh, people say, what is that? After all, there is preaching every day, often many times every day, so that we soon grow weary of it. What do we get out of it? All right, go ahead, dear brother, if you don’t want God to speak to you every day at home in your house and in your parish church, then be wise and look for something else; in Trier is our Lord God’s coat, in Aachen are Joseph’s pants and our blessed Lady’s chemise; go there and squander your money, buy indulgence and the pope’s secondhand junk; these are valuable things! You have to go far for these things and spend a lot of money; leave house and home standing idle!

But aren’t we stupid and crazy, yes, blinded and possessed by the devil? There sits the decoy duck in Rome with his bag of tricks, luring to himself the whole world with its money and goods, and all the while anybody can go to baptism, the sacrament, and the pulpit! How highly honored and richly blessed we are to know that God speaks with us and feeds us with his Word, gives us his baptism and the keys. [absolution] But these barbarous, godless people say: What, baptism, sacrament, God’s Word?—Joseph’s pants, that’s what does it! It is the devil in the world who makes the high personages, the emperor and the kings, oblivious to such things and causes them to allow themselves to be so grossly duped and fooled and be spattered with filth by these first-class rascals and liars, the pope and his tonsured shavelings. But we should listen to God’s Word, which tells us that he is our schoolmaster, and have nothing to do with Joseph’s pants or the pope’s juggling tricks.

Luther, literally with his dying breath, calls the church to listen to God’s Word and to find the power ofGod where God has put it, in the preaching and sacraments. If Luther came and preached to the American evangelical church today, his message could be exactly the same one he preached in Eisleben in 1546. So many today are looking for God and His power everywhere except in the preached and visible Word. Some fly to Toronto as a pilgrimage for holy laughter. Some embrace Rome and its old improvements on the ways of God. Others seek the powerful magic of wise sociologists at the Crystal Cathedral or Willow Creek Community Church. Still others fill stadiums to be empowered by roaring crowds or send money to some wild televangelist to get some powerful trinket in return. But the Bible and the local church’s ministry are often neglected or despised.

May the legacy of Luther live among us again. May the Holy Spirit fill our hearts with a great desire for the true power of God found in the faithful preaching of the Word and the faithful administration of Christ’s sacraments.

Dr. Godfrey is president of Westminster Theological Seminary in California.