This is the picture that is given to us throughout the book of Revelation. It is also the picture that is given to us in Revelation 2:8–11. We have maintained that the book of Revelation is divided into seven parallel sections – each spanning the time from Christ’s first coming to His second coming. Although these seven sections are parallel, they are progressive – there is movement, there is progress, there is an intensifying of the action – as the warfare between Christ and Satan between the kingdom of Christ and the kingdom of Satan – becomes all the more hostile. The first section, Chapters 1–3, present us with a composite picture of the Church in the World from the first coming of Christ to the second coming of Christ. In Revelation 2:8–11, we find that the church in the world is a persecuted church. 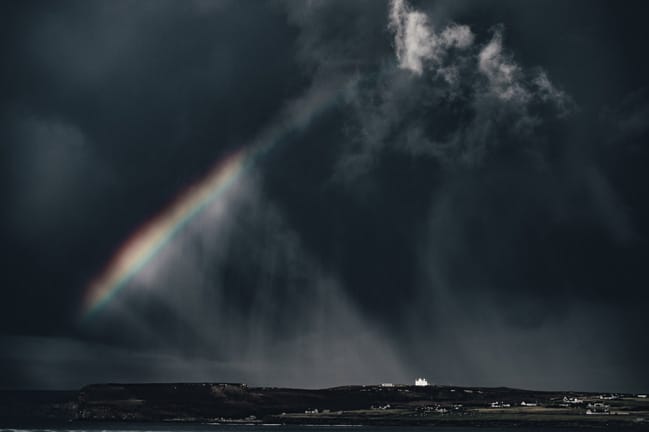 We give our attention, then, to the church in Smyrna. William Hendriksen has described the city as follows: “This city, located on an arm of the Aegean Sea, was a rival of Ephesus. It claimed to be the ‘First City of Asia in beauty and size.’ A gloriously picturesque city, it sloped up from the sea, and its splendid public buildings on the rounded top of the hill Pagos formed what was known as the ‘crown of Smyrna.’ The westerly breeze…comes from the sea and blows through every part of the city rendering it fresh and cool even during the summer. From the very beginning of Rome’s rise to power, even before its days of greatness, Smyrna was its loyal ally and was recognized as such by Rome. The faithfulness and loyalty of the Smyrnians became proverbial.”

While the city of Smyrna was faithful to Rome, the Christian Church in Smyrna was faithful to Christ. Consider the commendation Christ gives in verse 9, “I know your works, tribulation, and poverty (but you are rich); and I know the blasphemy of those who say they are Jews and are not, but are a synagogue of Satan.” The church in Smyrna is set before us as one of only two churches in Revelation that does not receive a rebuke from the Lord. The other church is Philadelphia. Smyrna, then, is one of the healthiest churches addressed. There is no rebuke; there is only commendation! The church of Smyrna was a faithful church.

That faithfulness, however, comes at a price. Though the church was rich in the Lord, she was poor in the world. She was in poverty, in large measure due to the rise of the imperial cult. The Roman Emperor was considered a god, and it was the duty and the responsibility of all the inhabitants of the Roman Empire to bow down and worship the emperor as the god of gods, king of kings, and lord of lords. They were even required to offer sacrifices to the Emperor.

G.K. Beale has described the situation in rather vivid terms: “The imperial cult permeated virtually every aspect of city and often even village life in Asia Minor, so that individuals could aspire to economic prosperity and greater social standing only by participating to some degree in the Roman cult. Citizens of both upper and lower classes were required by local law to sacrifice to the emperor …. City officials were so dedicated to the cult that they even distributed money to citizens from public funds to pay for sacrifices to the emperor. It was almost impossible to have a share in a city’s public life without also having a part in some aspect of the imperial cult. Pressure on Christians to conform to such participation would have increased during Domitian’s reign. Those refusing to participate were seen as politically disloyal and unpatriotic.”

Persecution came not only from the Gentiles, but also from the Jews. Christ says to the Christians, “I know your works, tribulation, and poverty (but you are rich); and I know the blasphemy of those who say they are Jews and are not, but are a synagogue of Satan.” The Jews were quick to report the followers of Christ to the Roman authorities. Thus the faithful church in Smyrna lived in the face of persecution.

Christ’s Response to the Persecution

Given His knowledge of that persecution (recall His words to Saul on the road to Damascus: “Why do you persecute Me?!”), the words which He speaks next may well catch us off-guard. Verse 10, “Do not fear any of those things which you are about to suffer. Indeed, the devil is about to throw some of you into prison, that you may be tested…” We might have expected Him to say, “I know that you are persecuted now! I know what you are enduring! I know what you are up against! I know what you are facing! Don’t worry! I will remove it – I will take the persecution away!” But He says no such thing!

In fact He says the opposite: the persecution will become greater!

Persecution awaits us! Yes, it awaits us! Recall that these things are descriptive of the church in the world from the time of Christ’s first coming to the time of His return. That means these things are descriptive of us. Satan brings his hostilities against us; his hatred is directed toward us. He takes his stand against us. We are not mere spectators sitting in the stands watching the events unfold. We are brought into the arena and we ourselves participate in the action described for us here! We too face persecution, and that in increasing measure!

Why then does Christ allow His church to be persecuted? He tells us: “that you may be tested…” Even Satan serves the purposes of Christ. We are refined through such persecution. The church is purified through such persecution. The blood of the martyrs is the seed of the church. Persecution forces us to consider the cost. Those who are false Christians, and those who are false churches, quickly fall away in the face of persecution. But the true Church of Jesus Christ grows stronger!

And there is an end in sight. Such persecution, Christ says, shall last for ten days. To be sure, persecution shall reach its fullness, but the time is ordained by God. Indeed, it shall be cut short that, by the grace of God, the elect may endure.

A Word to the Faithful

In light of these things Christ says, “Be faithful until death, and I will give you the crown of life.” He alone has the right and the ability to do so, for He is the One who is the First and the Last, who was dead, and came to life… (2:8). It is His own life that He gives to those who die for the faith. That is why we have the promise of verse 11, “He who has an ear, let him hear what the Spirit says to the churches. He who overcomes shall not be hurt at all by the second death.”

In the passages referenced above, we read of the great persecution that is already now being brought against the church and that shall continue to grow against the church until the coming of Christ. As great as that persecution is, how much greater is the judgment that comes upon Satan and his kingdom! “The devil, who deceived them, was cast into the lake of fire and brimstone where the beast and the false prophet are. And they will be tormented day and night forever and ever….The sea gave up the dead who were in it, and Death and Hades delivered up the dead who were in them. And they were judged, each one according to his works. Then Death and Hades were cast into the lake of fire. This is the second death. And anyone not found written in the Book of Life was cast into the lake of fire” (20:10, 13–15).

But it is not the end of those who overcome in Christ. We shall not be hurt by the second death! And why not?! Consider Revelation 1:18, “I am He who lives, and was dead, and behold, I am alive forevermore. Amen. And I have the keys of Hades and Death.” The second death cannot hurt us who are in Christ – it cannot touch us who are in Christ – because Christ has undergone that judgment for us!! How great is our salvation!

These are serious times in which we live. Persecution is great; it will only increase. The persecutions we face now are harbingers of the great persecution that is coming. In the face of such things, we come back to the One who stands in the midst of the lampstands. He is our guard. He is our refuge. He is our strength. He is the First. He is the Last. He holds the keys of Hades. He holds the keys of death. He was dead. But now He lives forevermore! May God grant us ears to hear what the Spirit says to the churches!