In previous articles we laid out the structure of the Book of Revelation, following closely upon that proposed by William Hendriksen in his classic commentary More Than Conquerors. The Book of Revelation is divided into seven progressive parallel sections, each of them spanning the same time period but with ever-increasing intensity. The time period covered in each section is that between Christ’s first coming and His return on the clouds of glory.

Far from being a vision of grandeur, this composite picture of the church is both realistic and sobering. The first and the last letters describe those churches in the worst condition – churches in danger of losing their very identity. The central letters, letters three, four, and five, describe churches that are in serious trouble. Only the second and sixth letters describe healthy, vibrant churches, but even these churches face great persecution and turmoil. Five of the seven churches are unhealthy and in serious trouble; only two are healthy and in good condition, and they occupy the least important places in terms of the structure of these letters. Thus we begin and end with the churches in the worst condition, while those with serious trouble occupy the center of the chapters. This is a most realistic and sobering picture indeed!

The church of Ephesus is mentioned first, and that for several reasons. Geographically, Ephesus was closest to the island of Patmos (the island to which John has been exiled, and from which he writes), thus beginning the circle of seven churches to which these letters were sent. Ephesus had also played a leading role in the beginning of the Christian Church in the Gentile world; the Apostle Paul was instrumental in its development, and John later resided there. In spite of their labors, however, the church of Ephesus was soon in danger of losing her identity. Thus Ephesus is mentioned first because it is one of the seven churches in the worst condition.

Before considering the words of Christ to the church of Ephesus, a few comments concerning its background and history are in order. The city of Ephesus was situated on the western coast of the Aegean Sea on the Caystar River, and thus became the chief commercial center of western Asia Minor, even earning the name “The Crown Jewel of the Roman Empire.”

Ephesus was opulent, prosperous, rich, and wealthy. The temple of Artemis (also called Diana), the goddess of fertility, added to the wealth of Ephesus. This temple was massive. It measured 420 feet in length, 240 feet in width, 60 feet in height, with nearly 120 columns supporting it. The vastness of the temple was matched only by its magnificence and beauty. It was considered one of the seven wonders of the ancient world.

Because Ephesus was considered the temple keeper of the great Artemis, pilgrims would come from all over the world to Ephesus to do homage to Artemis. As part of their worship, they would deposit money at the temple. Eventually the temple became one of the primary banking institutions of Asia Minor. Money was not only deposited here, but it was loaned out as well, at a rather high rate of interest. Thus Ephesus became rich and wealthy.

The city of Ephesus was one of the most wealthy cities of the Ancient World and, at the same time, one of the most pagan. Yet here, by the grace of God, a Christian church had been founded. We have in Ephesus a picture of the church in the world. 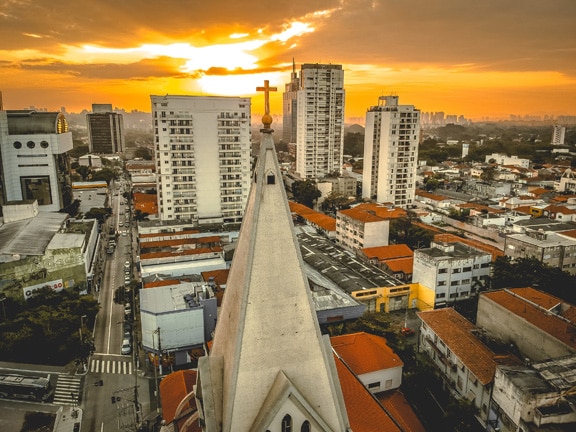 A Word of Commendation

First the commendation, verses 2-3, “I know your works, your labor, your patience, and that you cannot bear those who are evil. And you have tested those who say they are apostles and are not, and have found them liars; and you have persevered and have patience, and have labored for My name’s sake and have not become weary.”

Apparently, the church had taken the last words of the Apostle Paul seriously when he wrote to them, “Be on guard for yourselves and for all the flock, among which the Holy Spirit has made you overseers, to shepherd the church of God which He purchased with His own blood” (Acts 20:28). They had, indeed, guarded the church from the wolves. The church could not bear those who were evil. They had tested those who claimed to be apostles, but were not, and found them false. They labored for the name of Christ and had not become weary.

We even read in verse 6, “But this you have, that you hate the deeds of the Nicolaitans, which I also hate.” We do not know much about the Nicolaitans, other than the fact that they taught that some degree of accommodation to the pagan culture around them was permissible. The church at Ephesus hated the deeds of this group. Thus, the church at Ephesus was very much aware of doctrinal error; it was a church that was on guard against false teachers. For these things, the church is commended and praised.

A Word of Condemnation

However, that is not the whole picture. The church also received a stern rebuke, verse 4: “Nevertheless, I have this against you, that you have left your first love.”

Approximately 30 years earlier the Apostle Paul had written to the church at Ephesus of his prayer for them, “For this reason I bow my knees to the Father of our Lord Jesus Christ, from whom the whole family in heaven and earth is named, that He would grant you, according to the riches of His glory, to be strengthened with might through His Spirit in the inner man, that Christ may dwell in your hearts through faith; that you, being rooted and grounded in love, may be able to comprehend with all the saints what is the width and length and depth and height -to know the love of Christ which passes knowledge; that you may be filled with all the fullness of God” (Ephesians 3:14–19). Paul had closed that letter with similar words, “Grace be with all those who love our Lord Jesus Christ in sincerity” (Ephesians 6:24).

Now 30 years have passed, and while the church maintained something of its original zeal, at least with regard to doctrinal matters, they had lost their first love. No longer did the church of Ephesus love Jesus Christ as she did before. The result? She lost her witness in the world.

One commentator has written that this is precisely why Jesus identifies Himself in verse 1 as the One who walks in the midst of the lampstands. This statement was “intended to remind the introverted readers that their primary role in relation to their Lord should be that of a light of witness to the outside world …. This explains the loss of love as unfaithfulness to the covenantal task of enduring in preaching the gospel ‘for a witness.’”

It is for this reason that Christ, who stands in the midst of thelampstands, comes to the church at Ephesus with the threat of curse to those who fail to repent. The rebuke is great: “Remember therefore from where you have fallen; repent and do the first works, or else I will come to you quickly and remove your lampstand from its place -unless you repent” (2:5). Jesus says to the church, I will no longer walk in your midst. Your building may still exist; your people may still gather; your programs may still continue on; you may even look strong in the eyes of the world; but I am not there – and it will be to you “Ichabod: the Glory has departed!”

But now remember that this letter is addressed not only to the church of Ephesus at the end of the first century; it is addressed to the church that exists in the world from the time of Christ’s first coming to the time of His second coming. The letter is addressed also to us. Should we lose our love for Christ, we will lose our witness to the world, and Christ will remove the lampstand from our midst. Let us not think it cannot happen. Let us not think we are immune from such things. The warning is real. You need look no further than Ephesus.

A Word of Hope

Yet Christ does not leave His church – even his erring church – without hope. The warning is great, but so is the encouragement to persevere. It is with the promised blessing that the letter concludes: “To him who overcomes I will give to eat from the tree of life, which is in the midst of the paradise of God” (2:7).

The picture given to us here is a most realistic picture. Blessings and curses are set before us; life and death are set before us. May we, by the grace of God, cling to Christ, that we might never lose our first love. May God grant us ears to hear what the Spirit says to the churches.