How do you view the Church?

How do you view the church?

Do you see her primarily as weak and humble? Is her role to simply sit back and be conquered? Is her role to withdraw from the political and social realms as areas that are inherently evil? Is her role to humbly submit to the sword of her enemies, perhaps even being forced to go underground?

Revelation 7 has much to teach us concerning the Church. In this article we turn our attention to verses 4-8, where those who are sealed in the blood of the Lamb (vv. 1–3) are registered as the 144,000.

We begin with the most obvious question: “Who are the 144,000?” Verse 4 says, “And I heard the number of those who were sealed. One hundred and forty-four thousand of all the tribes of the children of Israel were sealed.” We go on to read in verses 5-8 that 12,000 from each tribe were sealed. At first glance it would seem that a remnant of Jews is in view. Israel is specifically mentioned and the number taken from each tribe is mentioned.

We must, however, allow Scripture to interpret Scripture. When we do so, we find that throughout the pages of the New Testament the Church is referred to as the true Israel. Consider Romans 2:28-29, “For he is not a Jew who is one outwardly, nor is circumcision that which is outward in the flesh; but he is a Jew who is one inwardly; and circumcision is that of the heart, in the Spirit, not in the letter; whose praise is not from men but from God.” Circumcision in the flesh does not make one a Jew. Circumcision of the heart is what makes one a true Jew.

Paul says in Galatians 5:15-16, “For in Christ Jesus neither circumcision nor uncircumcision avails anything, but a new creation. And as many as walk according to this rule, peace and mercy be upon them, and upon the Israel of God.” He calls the Church the “Israel of God.” He writes in Philippians 3:3, “For we are the circumcision, who worship God in the Spirit, rejoice in Christ Jesus, and have no confidence in the flesh.” The Church is the circumcision. Paul consistently speaks of the Church as the New Israel.

Such language is not unique to Paul.

Consider James 1:1, “James, a bondservant of God and of the Lord Jesus Christ, to the twelve tribes which are scattered abroad.” Who are the “twelve tribes scattered abroad” but the Church of Jesus Christ. Consider also 1 Peter 2:9, where Peter addresses the church and says, “But you are chosen generation, a royal priesthood, a holy nation, His own special people…” Peter takes descriptions that were given to Old Testament Israel and applies them to the Church.

The Church, then, is the New Israel. This is further seen in the book of Revelation itself, where John applies them to the Church. Consider 1:6, “…and has made us king and priests to His God…” Consider also 5:10, “And have made us kings and priests to our God.”

Many other Old Testament images applied to Israel are now taken and applied to the Church. Revelation 2:17, “To him who overcomes I will give some of the hidden manna to eat.” Revelation 3:9, “I will make those of the synagogue of Satan, who say they are Jews and are not, but lie—indeed I will make them come and worship before your feet, and to know that I have loved you.” Revelation 3:12, “He who overcomes, I will make him a pillar in the temple of My God, and he shall go out no more. I will write on him the name of My God and the name of the city of My God, the New Jerusalem.”

All of this leads to the conclusion that the Church is the New Israel (we shall see further support for this position in chapter 14, where we meet up with the 144,000 once more and are told that these are the redeemed of the Lord). We do not have to throw out our eschatology and become Dispensational Premillennialists, holding to a Pre-tribulation rapture! The Amillennial position stands and makes perfectly good sense. The 144,000 sealed out of the tribes of Israel have in view the Church as the New Israel.

Notice that there are 144,000 sealed; 12,000 from each of the 12 tribes. The number is clearly symbolic. It is the number of completeness. In view are all the elect of God—the complete and perfect number of those redeemed and sealed by the blood of the Lamb. None can be added to this number, nor can any be taken away. The elect of God are numbered and listed. We have a roll call numbering and listing the people of God. We have a census numbering and listing the people of God. 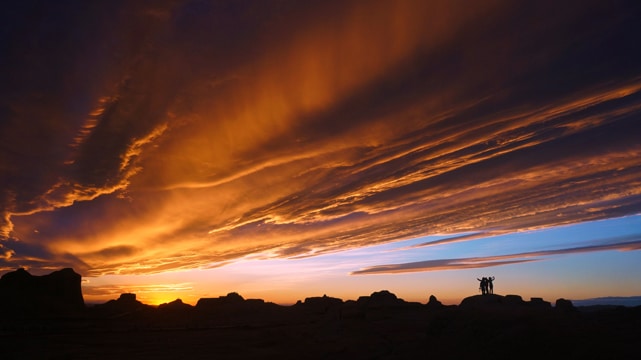 Our confessions recognize the importance of church membership. Article 28 of the Belgic Confession states: “We believe, since this holy congregation is an assembly of those who are saved, and outside of it there is no salvation, that no person of whatsoever state or condition he may be, ought to withdraw from it, content to be by himself; but that all men are in duty bound to join and unite themselves with it; maintaining the unity of the Church; submitting themselves to the doctrine and discipline thereof; bowing their necks under the yoke of Jesus Christ; and as mutual members of the same body, serving to the edification of the brethren, according to the talents God has given them. And that this may be the more effectually observed, it is the duty of all believers, according to the Word of God, to separate themselves from all those who do not belong to the Church, and to join themselves to this congregation, wheresoever God has established it, even though the magistrates and edicts of princes were against it, yea, though they should suffer death or any other corporal punishment. Therefore all those who separate themselves from the same or do not join themselves to it act contrary to the ordinance of God.”

Now to be sure, we cannot place our trust and our faith in our church membership. It is not as though being a member of the church on earth guarantees that you are also a member of the true Church. To be numbered and listed among the church on earth in no way guarantees that you are numbered and listed among the church in heaven. To belong to the visible church is no guarantee that you belong to the invisible church.

In that connection you might notice something quite interesting about the listing of the tribes of Israel.

Notice in the first place that 12,000 of each tribe are taken. Not the entire tribe, but a portion of the tribe. This comes through all the more clearly in the Greek, where no less than 13 times in these verses do we read the phrase “out of,” reminding us that only a portion out of the whole is saved. Indeed, they are not all Israel who are of Israel.

Notice in the second place that entire tribes are missing from the list. Dan and Ephraim are missing from the list. Why are these tribes missing? The answer is found in the history of these tribes as it is recorded for us in Judges 17-18. Micah, we are told in Judges 17:1, was from the mountains of Ephraim. Micah had a carved image made for his house. He also set up a shrine in his house and consecrated a priest for himself in his house. Micah said, ‘Now I know that the Lord will be good to me, since I have a Levite as priest!’” So ends Judges 17. Judges 18 then begins by telling us that in those days the tribe of Dan did not yet have its inheritance, and as they were going through the land, they came to the house of Micah. They took the carved image, the household idols, and the molded image, and the priest. They then proceeded to set up a city for themselves, and they named it Dan, and there they set up the carved image.

All of this foreshadows what happened when Jeroboam becomes king in Israel. Jeroboam did not want the people of the northern tribes to go to Jerusalem, and so he set up golden calves in Bethel and in Dan, and said, “these are your gods, O Israel, who brought you up out of Egypt.” He revived the false worship and idolatry of the golden calf! The tribe of Dan was a willing partner in such sin.

Consequently, the tribe of Dan was one of the first to be exiled. Does that tell you something of the importance of worship? It should! It is not enough to worship the true God (the 1st commandment), we must also worship Him with true worship (the 2nd commandment).

These things remind us that the Church on earth is the Church militant. She is a Church that is attacked by Satan and his minions. She is a Church attacked by the wolves on the outside. She is a Church attacked by wolves dressed in sheep’s clothing on the inside. The gates of hell have been set against her. The Church is in the midst of a war. If you doubt that, read the seven letters to the seven churches. Those churches that are most faithful suffer the greatest persecution and the greatest attacks. Faithless churches, compromising churches, are no threat to Satan, and so he leaves them alone. Faithful churches, uncompromising churches, are a great threat to him, and so he does not leave them alone. The true and faithful Church is a Church under attack!

It is necessary, then, for the people of God to gather together as the people of God, the body of Christ, the fellowship of the Holy Spirit, to feed regularly upon God’s Word and to be nourished with the visible Word in the sacraments. The Church is the Church militant! A soldier cannot fight the battle alone; a soldier is strengthened when he stands shoulder to shoulder with another soldier. So it must be in the army of God, the Church militant.

Revelation 7:4-8 has in view the Church pictured as an army. Don’t let the picture mislead you. This is not some tribulation force made up of converts of those who were left behind. This is not some holy crusade, equipped with swords and weapons to slay the infidels. This is an army that marches forth with the Word and Sacraments. This is an army that marches forth, remaining faithful to the Word of God and the testimony.

This is an army that assumes the posture of her King, even the Lamb that was slain. How does Paul put it? “For Your sake we are killed all the day long; we are accounted as sheep for the slaughter.” The Church is a persecuted Church; she is the object of the world’s scorn and hatred. She appears weak and humble.

Yet precisely in that apparent weakness and humility lies her strength and power. Her posture is that of her King, even the Lamb slain who now stands on Mt. Zion! Do you remember the next words of Paul? “Yet in all these things we are more than conquerors through Him who loved us.” The Church belongs to her King. She has been sealed in the blood of the Lamb, and nothing can ever break that seal!

How do you view the church? Powerful and mighty? Or weak and humble? The Church of Jesus Christ, conformed to the Lamb slain, finds her power in weakness, her might in humility. She conquers as the Lamb conquered.

And so the question is left for you: are you a soldier of the cross, a follower of the Lamb; are you numbered and listed in the census of the Church militant?