“I looked when He opened the sixth seal, and behold, there was a great earthquake; and the sun became black as sackcloth of hair and the moon became like blood. And the stars of heaven fell to the earth, as a fig tree drops its late figs when it is shaken by a mighty wind. Then the sky receded as a scroll when it is rolled up, and every mountain and island was moved out of its place. And the kings of the earth, the great men, the rich men, the commanders, the mighty men, every slave and every free man, hid themselves in the caves and in the rocks of the mountains, and said to the mountains and rocks, ‘Fall on us and hide us from the face of Him who sits on the throne and from the wrath of the Lamb! For the great day of His wrath has come, and who is able to stand?’” (Revelation 6:12–17)

In the interlude of Chapter 7, we have a picture of the Church Militant in verses 1-8. The Church is numbered and listed in terms of a military census, arrayed for battle and prepared for war. The Church Militant is under attack by the hordes of Satan; she is a Church on the defensive. But she is also a Church on the offensive, as she goes forth to conquer, not with weapons of war, but with the Word and Sacraments.

We read first of the activity of the saints. “Therefore they are before the throne of God, and serve Him day and night in His temple…” (7:15).

That we have in view the saints of God is evident from verse 14, where the elder instructed John as to their identity: “These are the ones who come out of the great tribulation, and washed their robes and made them white in the blood of the Lamb.”

But there is even more. The saints have washed their garments in the blood of the Lamb, and their robes have been made white. Elsewhere we see that the robes of white are indicative of the righteousness of Christ. Not only has Christ died the death we deserved to die; He has also lived the life we could not live. The life that He lived—His active obedience—has been imputed to us. His righteousness has become ours. He was delivered over to death for our sins and was raised to life for our justification. God made Him who knew no sin to be sin for us that we might become the righteousness of God in Him. By His life we have been clothed in garments of righteousness. Praise God for the active obedience of Christ!

The Result of Salvation

“Therefore they are before the throne of God, and serve Him day and night in His temple” (Revelation 7:15). What is the result of salvation? Worship! We are saved to worship! Salvation is not an end in itself. We are saved for a purpose, and that purpose is to worship God! We see the pattern already in the Old Testament exodus from Egypt. Why did Moses command Pharaoh to let God’s people go? That they might worship God! The great Old Testament deliverance of the people of God is found in the book of Exodus, but the story does not end there—it does not end with deliverance.

We shall serve Him and worship Him for all eternity in His temple. This is not some earthly temple; this is the cosmic Holy of Holies, the new heavens and the new earth, the very dwelling place of God! We do not go back to an earthly temple! We do not go back to an earthly tabernacle! Those things were only shadows and types of the heavenly reality. We shall stand in God’s presence. We shall serve Him in His Temple, in His glorious Presence.

The Activity of God

The phrase then takes us to the Old Testament exodus from Egypt. God Himself makes reference to that in Exodus 19:4, where He says, “You have seen what I did to the Egyptians, and how I bore you on eagles’ wings and brought you to Myself.” God hovered over His people, even as a bird hovers over its young. The picture becomes more complete when we consider Deuteronomy 32:10-12, “He found him in a desert land and in the wasteland, a howling wilderness; He encircled him, he instructed him, He kept him as the apple of His eye. As an eagle stirs up its nest, hovers over its young, spreading out its wings, taking them up, carrying them on its wings, so the Lord alone led him, and there was no foreign god with him.” How did God hover over His children in the Old Testament Exodus? He hovered over them by His glorious Presence, the pillar of cloud by day and the pillar of fire by night. He hovered over them and brought them to the promised land of rest.

“And it came to pass when the priests came out of the Most Holy Place (for all the priests who were present had sanctified themselves, without keeping to their divisions), and the Levites who were the singers, all those of Asaph and Heman and Jeduthun, with their sons and their brethren, stood at the east end of the altar, clothed in white linen, having cymbals, stringed instruments and harps, and with them one hundred and twenty priests sounding with trumpets—indeed it came to pass, when the trumpeters and singers were as one, to make one sound to be heard in praising and thanking the Lord, and when they lifted up their voice with the trumpets and cymbals and instruments of music, and praised the Lord, saying, ‘For He is good, For His mercy endures forever,’ that the house, the house of the Lord, was filled with a cloud so that the priests could not continue ministering because of the cloud; for the glory of the Lord filled the house of God.” 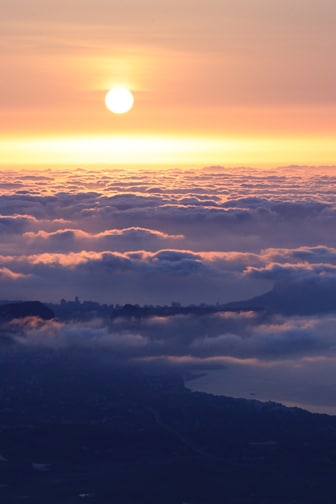 The glory of the Lord is pictured again and again as hovering over His people.

This great and glorious God shall keep us for all eternity. That is what it means that He spreads His tabernacle over us. Verse 16, “They shall neither hunger anymore nor thirst anymore, the sun shall not strike them, nor any heat…” We are reminded of the words of Psalm 121,

Who is able to stand? Revelation 7 gives you the answer: only those who are saved by the Lamb, washed in His blood, clothed in His righteousness, shall stand. And they shall stand, only to fall down in worshiping Him, their Shepherd who shall spread His tabernacle over them for all eternity. And in the tabernacle of His glorious Presence, you will never weep again.