The centrality of the throne in chapter 4 continues in chapter 5. There is, however, a shift in focus as we move from chapter 4 to chapter 5. Chapter 5 begins, “And I saw in the right hand of Him who sat on the throne, a scroll…” In chapter 5, but the focus now shifts to the scroll.

Verse 1 describes the scroll for us: “And I saw in the right hand of Him who sat on the throne a scroll written inside and on the back, sealed with seven seals.” What are we to make of this scroll?

Notice first of all that it is a scroll “written inside and on the back.” It is like the scroll that Ezekiel was once commanded to eat. The Lord said to Ezekiel: “You shall speak My words to them, whether they hear or whether they refuse, for they are rebellious. But you, son of man, hear what I say to you. Do not be rebellious like that rebellious house; open your mouth and eat what I give you. Now when I looked, there was a hand stretched out to me; and behold, a scroll of a book was in it. Then He spread it before me; and there was writing on the inside and on the outside, and written on it were lamentations and mourning and woe” (Ezekiel 2:7–10). Like the scroll of Ezekiel 2, the scroll of Revelation 5 is written on the inside and on the back; it is a scroll covered in writing; it contains lamentations and mourning and woe.

We find a similar picture in Daniel 12: “And there shall be a time of trouble, such as never was since there was a nation, even to that time. And at that time your people shall be delivered, every one who is found written in the book. And many of those who sleep in the dust of the earth shall awake, some to everlasting life, some to shame and everlasting contempt… (Daniel 12:1b–2). Daniel was commanded: “Shut up the words, and seal the book until the time of the end” (Daniel 12:4). Daniel responded, “My lord, what shall be the end of these things? And he said, ‘Go your way, Daniel, for the words are closed up and sealed till the time of the end’” (Daniel 12:8–9).

Is No One Worthy?

Having identified the scroll as symbolic of the history of redemption, we then move on to verse 2 and the cry of the angel. “Then I saw a strong angel proclaiming with a loud voice, ‘Who is worthy to open the scroll and to loose its seals?’”

Why does John weep so bitterly? Remember what the scroll represents: it represents the history of redemption. Think of the implications if that scroll is not opened and loosed. William Hendriksen writes as follows: “History will not be governed in the interest of the church; there will be no protection for God’s children in the hours of bitter trial; no judgments upon a persecuting world; no ultimate triumph for believers; no new heaven and earth; no future inheritance!” Is it any wonder John weeps, and that bitterly?

One Who Is Worthy

John would be left in his bitter weeping for all eternity, but he hears the pronouncement of one of the elders, verse 5, “But one of the elders said to me, ‘Do not weep. Behold, the Lion of the Tribe of Judah, the Root of David, has prevailed to open the scroll and to loose its seven seals.”

Notice the title that He is given: The Lion of the Tribe of Judah. The imagery comes from Genesis 49:8-12: “Judah, you are he whom your brothers shall praise; your hand shall be on the neck of your enemies; your father’s children shall bow down before you. Judah is a lion’s whelp; from the prey, my son, you have gone up. He bows down, he lies down as a lion; and as a lion, who shall rouse him? The scepter shall not depart from Judah, nor a lawgiver from between his feet, until Shiloh comes; and to Him shall be the obedience of the people. Binding his donkey to the vine, and his donkey’s colt to the choice vine, He washed his garments in wine, and his clothes in blood of grapes. His eyes are darker than wine, and his teeth whiter than milk.” 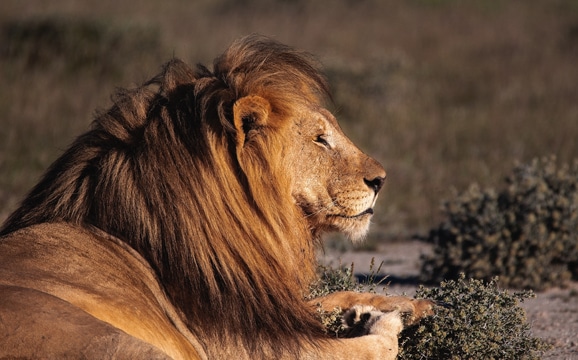 Notice also that He is called the Root of David. This language comes from Isaiah 11: “There shall come forth a Rod from the Stem of Jesse, and a Branch shall grow out of his roots. The Spirit of the Lord shall rest upon Him, the Spirit of wisdom and understanding, the Spirit of counsel and might, the Spirit of knowledge and of the fear of the Lord. His delight is in the fear of the Lord, and He shall not judge by the sight of His eyes, nor decide by the hearing of His ears; but with righteousness He shall judge the poor, and decide with equity for the meek of the earth; He shall strike the earth with the rod of His mouth, and with the breath of His lips He shall slay the wicked. Righteousness shall be the belt of His loins, and faithfulness the belt of His waist” (Isaiah 11:1-5).

The Lamb of God

John, having been instructed by the elder concerning the Lion of the Tribe of Judah, now expects to see that powerful, regal, majestic, mighty, conquering Lion. Instead, he sees a Lamb. Verse 6, “And I looked, and behold, in the midst of the throne and of the four living creatures, and in the midst of the elders, stood a Lamb as though it had been slain, having seven horns and seven eyes, which are the seven Spirits of God.” Don’t let the drama of this scene escape you. John turns, fully expecting to see a powerful Lion in all of its might and majesty, instead he sees a meek and humble Lamb.

Not only does he see a meek and humble Lamb, but the Lamb looks as though He has been slain. The Greek reads literally, “…a Lamb having been slain…” The Lamb has been slain once in the past, but the results of that slaying are abiding. The slaying of the Lamb continues to have effects to this very day, and for all eternity. This slaying, then, is crucial to the identity of the Lion who has overcome. The Lion who has overcome is the Lamb who was slain; in fact, it is precisely in His being slain that He overcomes! The cross, then, is central to the identity of Jesus. The cross bears its mark on the very person and work of Jesus Christ. You cannot understand Jesus apart from the cross. Even in heaven, He appears as a Lamb having been slain.

Furthermore, He has seven horns signifying the completeness of His power. He holds the keys of Hades and death in His hands. He was dead, but is now alive, and He lives forevermore! He has seven eyes which are the seven Spirits of God sent out into all the earth. He is a life-giving Spirit; He sends forth the Comforter to do His bidding. We have here the picture of Pentecost and the pouring out of the Spirit who now works in and through the Word to proclaim Christ!

The Lamb that was slain now stands in the midst of the throne, the elect belong to Him, and He now sends forth His Spirit to gather in every last elect sheep of His pasture! He sits on the throne! No one can thwart His plan: no one in heaven above, no one on earth below, no one under the earth; not the angels of heaven, not the kings of the earth, not the demons of hell, not even Satan himself! Christ is King! The Lion of the Tribe of Judah has prevailed! The Lamb slain has accomplished your redemption! Nothing in all of creation, nor in all of history, can change that fact!