In the middle of Christ’s letter to the Church in Laodicea we have the words of verse 20, “Behold, I stand at the door and knock. If anyone hears My voice and opens the door, I will come in to him and dine with him, and he with Me.”

Many have taken these words as an evangelistic text in which Christ is standing at the door of the sinner. They see Him as pleading and weeping that the sinner will just open the door so that Christ may come in and save him. But that misses the point altogether! In the first place this verse is not addressed to the unbeliever, it is addressed to the church. And then we must notice that it is not even so much addressed to the church in general, but specifically to God’s elect within the church. It is important to note that the verse follows on the heels of verse 19. To whom is Jesus is speaking? He is speaking to those whom He loves; those whom He rebukes out of that love; those whom He chastens out of that love; and those whom He seeks to bring back to Himself.

Jesus says, “If anyone hears My voice and opens the door…” True enough. But who are the ones that hear Jesus’ voice? Jesus tells us in the Gospel of John, “My sheep hear My voice!” Who are the ones then that hear the voice of Jesus and actually open the door? They are the elect of God, the sheep of the Good Shepherd, those whose hearts have been regenerated—those in whom God has created not only the ability to believe, but the belief itself.

Far from being an evangelistic text which pictures a weak, powerless, and weeping Savior, these words are a profound statement of the communion that exists between Christ and His own, between the Good Shepherd and His sheep. The words are taken from the Song of Solomon 5:2, where we read, “I sleep, but my heart is awake; it is the voice of my beloved! He knocks, saying, ‘Open for me, my sister, my love, my dove, my perfect one; for my head is covered with dew, my locks with the drops of the night.” 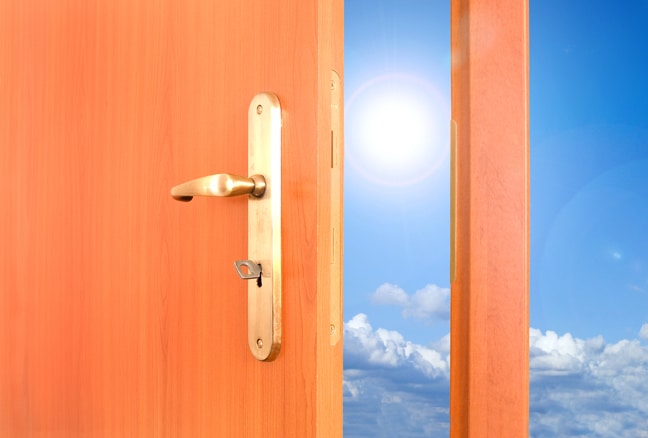 Though the Song of Solomon is a celebration of love between a husband and wife, it is also a picture of the wedding of God and His people, the Bride and the Lamb. What do we find, then, in the fifth chapter of this beautiful love poem?

The marriage has been consummated. God has pronounced His benediction upon the bridegroom and bride. But then the scene changes. It is night, and the bridegroom comes to the bride. He knocks on the door and calls his bride, “Open for me, my sister, my love…”

The bride hesitates. She hears the knocking; she hears the voice; but she hesitates. “I have taken off my robe; how can I put it on again? I have washed my feet; how can I defile them?” (v. 3). Finally, after much hesitancy, she arises to open the door, “My beloved put his hand by the latch of the door, and my heart yearned for him. I arose to open for my beloved, and my hands dripped with myrrh, my fingers with liquid myrrh, on the handles of the lock. I opened for my beloved, but my beloved had turned away and was gone” (3:4–6a).

Realizing her mistake, she quickly goes out to seek him. “I sought him, but I could not find him; I called him, but he gave me no answer” (3:6). And now as she seeks him, she is wounded by the watchmen. “The watchmen who went about the city found me. They struck me, they wounded me; the keepers of the walls took my veil away from me” (3:7).

Having temporarily lost her bridegroom, having become apathetic, and now receiving pain due to her indifference, she charges the daughters of Jerusalem, “If you find my beloved, tell him that I am lovesick!” (3:8). Do you see what has happened? Out of her apathy, her love is strengthened. She finally realizes what she is without him. She realizes that she needs him desperately. She realizes that her life is found in him.

As the passage continues on, we find that the love of the bridegroom for his bride is a strong love, a love that cannot be conquered. She will be his exclusively. He is jealous for her. She belongs to him, and he will not let her go. As the passage continues, the bridegroom allows himself to be found, and the book concludes with the beautiful consummation of their love.

Indeed, the most sobering picture is reserved for the last of the seven letters. But in this letter we hear not only the most sobering warning, but also the most comforting promise. He who has an ear, let him hear what the Spirit says to the churches.