Is the Gospel good news to you? Or is it merely news?

If the Gospel of Jesus Christ is mere news to you, then you do well to consider that which the six trumpets of Revelation 8 and 9 set before you.

If the first four trumpets belong together, then the last three trumpets belong together. These trumpets do not have in view creation; they have in view man himself. The last three trumpets sound, and mankind is touched. The human race is shaken and undone. With the fifth trumpet blast we have the unleashing of the hordes of hell; so terrible is this affliction, man cries out for death, man seeks death, man wants to die; but death escapes him. You can read about in Revelation 9:1–12.

If you thought things were horrific with the sounding of the fifth trumpet, they get worse with the sounding of the sixth trumpet. With the sixth trumpet blast war is set before us—a composite picture of all the wars and rumors of wars that have occurred from the time of Christ’s first coming to the time of His return. Here we find man mercilessly killing one another. Here we are confronted with the butchery, brutality, and bloodbath of war. One third of mankind is killed. You can read about it in Revelation 9:13–21.

This, then, is the lay of the land. The six trumpets of Revelation 89 have been sounding from the time of Christ’s first coming; they will continue to sound until Christ comes again, and that with increasing intensity. Even now the trumpets are sounding! Even now God is active. Even now God is speaking—speaking through His mighty trumpet blasts—warning the world of the impending doom and judgment that is to come! The seventh trumpet is about to sound!

This interlude, however, is not to be understood chronologically. It is not as though the six trumpets must complete their sounding, and only then do the events of Chapter 10 take place. The interlude of Chapter 10 is descriptive. It describes the life of the church as she lives in the midst of the world between the first coming of Christ and His return on the clouds of glory to judge the living and the dead. Chapter 10 reminds us, once again, that we are not spectators sitting in the stands watching the events unfold before our eyes; we are participants in the action. This is the history of the church.

The Angel of the Lord

The interlude begins with the words of verse 1: “I saw still another mighty angel coming down from heaven, clothed with a cloud. And a rainbow was on his head, his face was like the sun, and his feet like pillars of fire.” Whatever the identity of this mighty angel, it is clear that this angel is being set over and above the seven angels who sound the seven trumpets. In view here is no ordinary angel. In view here is an angel that excels all others. In view here is the mighty Angel of the Lord! 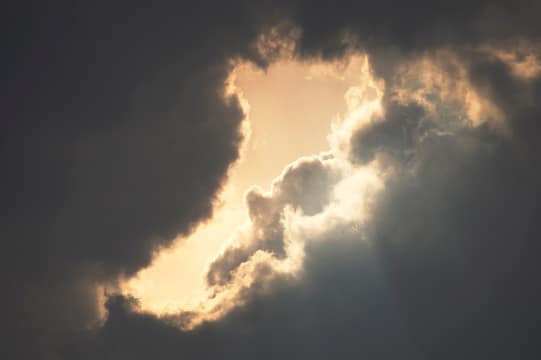 A rainbow is on His head. You remember the rainbow of Genesis 9? The waters of the flood have receded, the dry land has emerged, and God makes a covenant with all creation, promising never again to destroy the world with a flood, and He gives the sign of a rainbow in the skies. The Hebrew is the word for a warrior’s bow. But that bow is now held in the position of peace; not raised in the position of war to send forth its arrows of wrath, but held at the side in the position of peace. God will keep covenant; the rainbow is proof of that. That rainbow now surrounds the head of the Christ, signifying His covenant faithfulness.

His face is like the sun. Here is the Sun of Righteousness, risen with healing in His wings! He dwells in unapproachable light! He is Light! His feet are like pillars of fire. Again, remember the pillar of fire by night, bringing light, warmth and protection for Israel of old.

The Next Great Act of God

The only remaining act of God, in terms of the history of redemption, is His return to judge the living and the dead. Christ has sworn an oath before the Father, that there should be delay no longer, that the seventh trumpet is about to sound, that He is about to come again!

But then, look what happens next, verses 8–11. John is commanded to take the little book from the hand of Christ; he is commanded to eat it, and it will be sweet as honey in his mouth, but bitter in his stomach, and then he is to prophecy again to many peoples, nations, tongues, and kings. The little book which Christ holds in His hand is the gospel, which proclaims the mighty acts of God in history for the redemption of His people—those mighty acts that culminate in the person and work of Jesus Christ. John must eat that book, and it will be sweet as honey in his mouth, even as it is bitter in his stomach. Such is the message of the gospel. What can be sweeter than the gospel of salvation by grace alone through faith alone in Christ alone? But that same gospel also brings bitterness, for as that gospel is preached, persecution breaks out against those who proclaim it, bringing bitterness.

The message of the gospel, then, goes forth. The message of Christ is the message of the gospel. It goes forth to peoples, nations, tongues, and kings. It goes forth to you. Do you understand what you are being confronted with in Revelation 10? Christ is even now standing, as it were, one foot on the sea, the other foot on the land, hand raised to heaven, swearing an oath before the Father, that the time is at hand. Such is the urgency of the gospel! The six trumpets have been sounding from the time of Christ’s first coming, they are sounding even now, but the seventh and last trumpet is about to sound. In God’s conception of things, there is no delay.

Understand the time in which you live–the heavens are about to open! It is as though the skies are about to be rolled back; the trumpet is about to resound; Christ Himself is about to descend. Is it well with your soul?

The message of the gospel goes forth to you. This message, presented to you in the interlude of chapter 10, is not intended primarily to warn the unbeliever (though it does that); it is intended primarily to comfort the saints. Your Savior has accomplished your redemption, and so certain is it that He will bring that redemption to its consummation, that He swears an oath before the Father that He will bring the consummation soon!

This is the comfort of the Church. This is the message of the gospel. May it not be merely news to you. May it be, in every sense of the word, good news to you.