“So the evening and the morning were the first day” (Genesis 1:5).

“So the evening and the morning were the second day” (Genesis 1:8).

“So the evening and the morning were the third day” (Genesis 1:13).

“So the evening and the morning were the fourth day” (Genesis 1:19).

“So the evening and the morning were the fifth day” (Genesis 1:23).

“So the evening and the morning were the sixth day” (Genesis 1:31).

But Adam disobeyed God and broke the covenant of works, thereby earning for himself and all his posterity cursing and death. Thus, he was banished from the garden, and instead of entering into the eternal Sabbath rest of God, he was simply commanded to “remember the Sabbath day to keep it holy” (Exodus 20:8ff.).

It would take the work of the last Adam, Jesus Christ, who obeyed God perfectly, keeping the covenant of works, to earn for Himself and all those in Him the blessings of confirmation in righteousness and the right to enter the eternal Sabbath rest of God. This is where John directs us in the rather cryptic statement, “I was in the Spirit on the Lord’s Day” (Revelation 1:10).

Four times in the book of Revelation we find John using the phrase “in the Spirit.” We find it here in 1:10, where John stands in the presence of the glory of the Son of Man. We find the phrase again in 4:2, where we read, “Immediately I was in the Spirit; and behold, a throne set in heaven, and One sat on the throne.” Here the Spirit ushers John up into heaven to behold the glorious throne-room of God. We find the phrase again in 17:3, where we read, “So he carried me away in the Spirit into the wilderness. And I saw a woman sitting on a scarlet beast which was full of names of blasphemy, having seven heads and ten horns.” Here John sees a vision of the great harlot, Babylon. The final occurrence of the phrase, which serves as the counterpart to 17:3, is found in 21:10, where we read, “And he carried me away in the Spirit to a great and high mountain, and showed me the great city, the holy Jerusalem, descending out of heaven from God.”

These four instances of the phrase “in the Spirit” tell us, then, that John is ushered up into the throne room of God, into the council-chambers of God. There he not only sees the glory of God, but he hears the divine deliberations of God. He is in the Spirit, and as he is in the Spirit, he is transformed into a new creation. That same Spirit who raised up Christ from the dead, and who is, and ever remains, the source of His exalted and glorified life is the same Spirit that now apprehends John, ushers him into the glory of heaven, and make him a new creation. 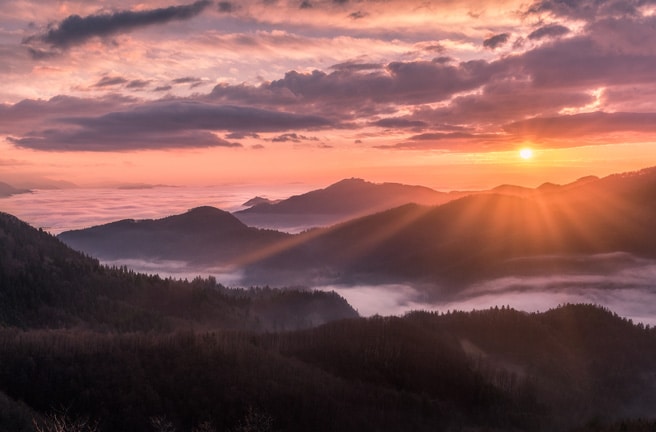 It is significant that John receives the visions of Revelation while he is “in the Spirit on the Lord’s Day.” John receives The Revelation of Jesus Christ on Sunday. Why is that significant? It is significant because the book of Revelation describes for us, with horrific imagery, the judgment and wrath of God, leading up to and including the final judgment and wrath of God. How is it that Jesus can have John record such horrific things with such vivid detail? Because, as one preacher has put it, “behind the Apocalypsen lies an experienced Golgotha.” In other words, Jesus can have John record such horrific judgment and wrath because Jesus Himself has endured it!

What is the message proclaimed to the Church as she meets with her Risen Savior on each subsequent resurrection day? The message is this: you belong to a Savior who has already stood trial in your place before God and so has removed from you the whole curse, and has secured for you the eternal Sabbath rest of God! Even as John was in the Spirit on the Lord’s Day, thereby made a new creation, so each Lord’s Day, as the Spirit works in and through the proclamation of the Word—proclaiming the glorious gospel of Jesus Christ – we are made a new creation in Him.